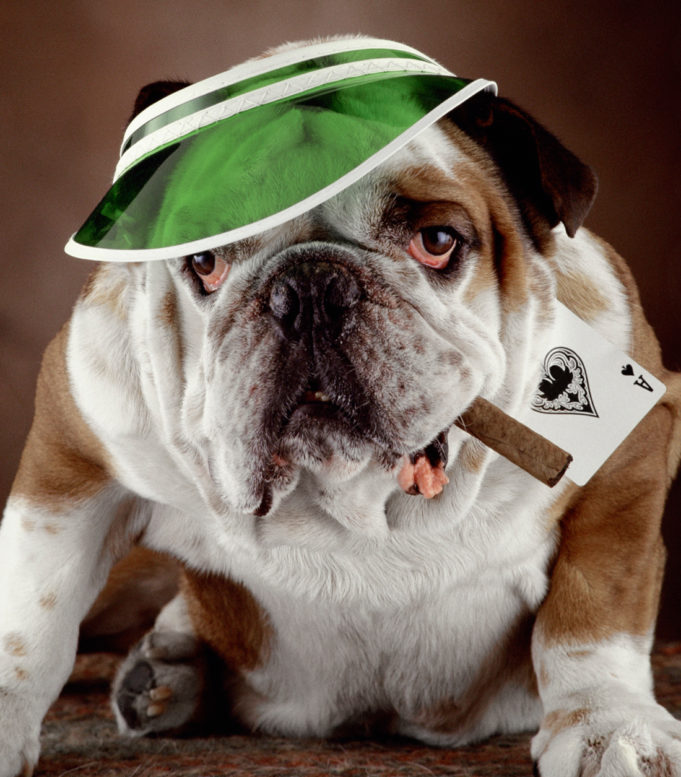 Do you or someone you know own or have the ability to acquire five or six dogs of various breeds, all of which are trained well enough to sit still while a photographer recreates one of those “dogs playing poker” paintings? If so, have I got the shooting location for you!

I’m serious by at least 40 percent. The card game area at Bathtub Gin’s is really just a single table on the stage in the corner of the room, but the stage, about 10 square feet of wood flooring angling into the room in a pentagonal shape six inches off the floor, is sequestered by mood lighting and red theatrical curtains, gathered and hanging in loops from the ceiling. In my memory, the curtains and the lights glaring down on the table gave it this baroque cast. I’m not a photographer, but I think the lighting would make some dogs wearing poker-playing attire (sunglasses, hoodies, fedoras, and Texas Tech ballcaps) look pretty sweet. Given that the wall hangings were spare (the flags of America and Texas, sewn from tattered, recycled cloth), I also got the impression of looking at the set from some nonexistent play, an off-Broadway production depicting the greater context surrounding the title scene of ABC’s Roseanne or perhaps a musical about the World Series of Poker. (Snookie is portrayed by Kelly Osbourne, and Jennifer Tilly plays herself. Ken Jeong is in it, too.)

Between the stage and the front door are plush seats centered around a table bearing a hookah. While I was there, a woman browsing her phone reclined on the couch about as much as is allowed before an employee accuses you of trying to sleep there. These two elements –– a hookah-equipped chillout space and an attitude that there’s almost no such thing as getting too comfortable –– were just a couple of Bathtub Gin’s’ charms.

Besides the poker table and the hookah couches, Bathtub Gin’s boasts a bunch of other little touches that make it enjoyable to sit at the bar and gawk at your surroundings. A brass headboard hangs over the back bar mirror on one wall. Some of the lamps look as if they came from a brothel. The liquor shelves are made from reclaimed wood, but the result is more “dad’s woodshop” than “artisanal, Etsy-craft hashtag.” the vibe at Bathtub Gin’s is amicable and blue-collar. It’s a bar that’s happy to sell Lone Star, even though there’s an independent brewery across the street.

That would be Martin House, and, of course, Bathtub Gin’s carries their beers, as well as a rotating list of other locals –– it’s not as robust as you’d find at spiffier places like the Trinity River Taphouse or even a bar like Proper, but macrobrew-haters can still find something to sip on. I was pleasantly surprised to see bottles of Shiner Ruby Red for sale.

Bathtub Gin’s is a big, casual hangout spot with tons of seating and even some spots for you to bluff your way to Texas Hold ’em riches. In addition to poker, there’s a pair of billiards tables and some new-school barcade games, plus regular Thursday night appearances by the Keebs and Sunshine Stuff Grill food truck and DJ sets by someone named DJ Sleazy Lee. Bartender Mallory was quick to replace my empty beers with fresh ones. And even if Bathtub Gin’s’ poker table doesn’t strike you as anything more than a poker table, at least there’s plenty more to gaze at over the top of a beer or three. –– Steve Steward