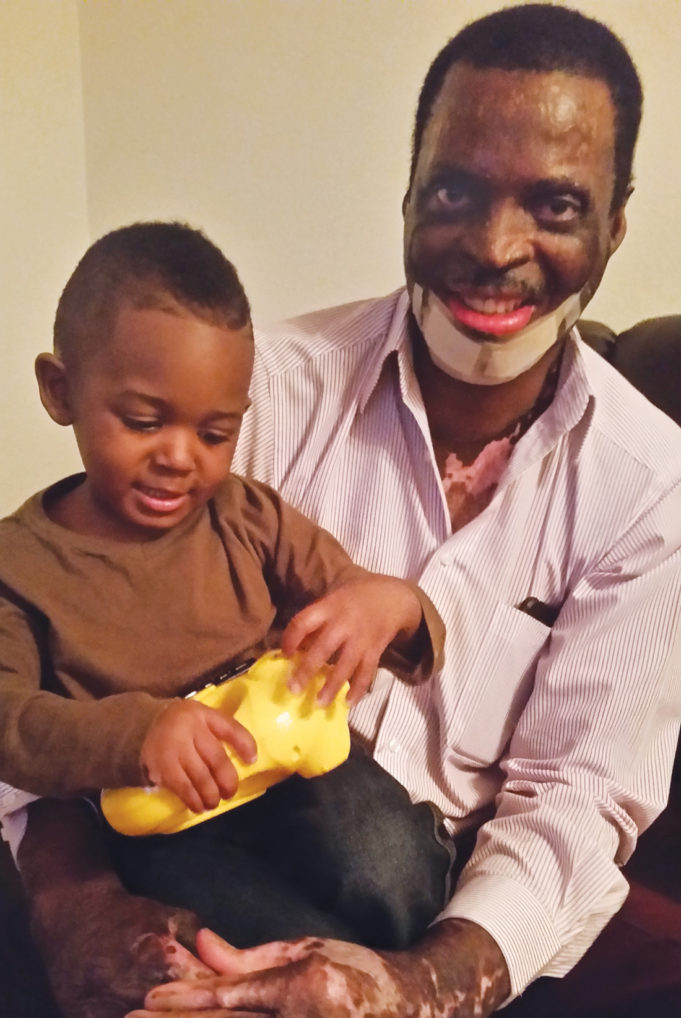 First responders cut away Clarence Johnson’s singed clothing while he looked out the ambulance’s small window. “I remember thinking, ‘How could such a beautiful day turn out to be so bad?’ ”

It was Friday, Aug. 3, 2012. Johnson, a heating and air-conditioning repairman, had woken up around 7, climbed into his maroon 2007 Ford F-150, and headed off to answer his first service call. Before long, he’d be on a gurney in an ambulance barreling down U.S. 287 toward Parkland Hospital. The cloudless sky was robin’s egg blue, he recalled, so bright it almost hurt to look at.

The 56-year-old Johnson had owned Tech Services A/C Heating and Refrigeration since he was in his 20s, relying on his nephew, Antonio Morris, to help with installations and repairs. Johnson had driven to meet Morris at the Miller Food Mart off 287 at Miller Avenue in southeast Fort Worth. They’d installed a unit the day before, and it was no longer cooling the store. Morris arrived first and called his uncle. The unit was making a humming noise he’d never heard before. Johnson asked him to wait. It was probably just a fuse. He had the part to fix it in his truck.

After arriving, Johnson climbed to the roof of the small store to check the unit. He checked for a blown fuse and a broken fan, but the low hum wasn’t stopping. He wasn’t worried. Years of experience indicated something minor. Perhaps a wire had come loose.

He isolated the issue to one of the compressors and began what’s called continuity check, kneeling in front of the unit to cut the power. This particular part was a Copeland Scroll Compressor, part of the 600 series. Seconds later, the unit was spewing hot oil and flames over his face, neck, torso, hands, and thighs. Morris worked desperately to put out the flames as Johnson screamed in pain.

Once the fire was out, Johnson became quiet. He climbed down from the roof on his own.

At the hospital, longtime girlfriend Carlene King told Johnson repeatedly that he’d be OK. She loved this man who’d helped raise her two daughters as his own. Only two days before, they’d returned from a vacation. Everything seemed so right.

“Stop telling him he’s going to be OK,” King said the nurses told her. “He’s not.”

Johnson was refusing treatment even as his organs were shutting down.

“When it happened, I thought, ‘That was it,’ ” Johnson remembered. “I didn’t want a life where someone had to take care of me.”

For 24 hours, family members begged him to accept treatment. Even with second- and third-degree burns over 62 percent of his body, he didn’t lose his sense of humor. Before he agreed to treatment, Johnson promised to line up his family members and slap all their faces in one motion like Moe used to do to Larry and Curly if he didn’t look as good as they promised.

The wait should have cost him his life. The delay in treatment meant Johnson’s body didn’t receive critical fluids and antibiotics within the first few hours.

“The doctors called him the ‘Miracle Man’ because nobody should have survived that,” King said. “He needed dialysis and medication. Then his organs started working on their own. That’s what God will do.”

Johnson called a lawyer and sued the manufacturer of the compressor that had exploded. Dallas-based PayneMitchell attorney Andy Payne’s first reaction when he saw Johnson was shock. The attorney said his client’s burns were so severe the color had left his face and hands.

“Just out of compassion, you see an injury like this, and you want to help,” Payne said.

After three days of deliberation in October 2015, a Fort Worth jury decided it was a combined failure on the part of the manufacturers. Emerson Climate Technologies and Fusite had created and sold a product they knew to be defective, without posting a recall or warning labels on the individual units. Payne is investigating whether other people have been injured by the faulty part but knows of no other lawsuits at this time. The jury awarded Johnson $16.3 million in damages.

Payne said the fight isn’t over.

“Emerson absolutely will appeal … but we feel good,” Payne said. “We’re confident there weren’t any mistakes.”

Emerson officials had not responded to an interview request for this article prior to publication.

Johnson began working at an early age unloading trucks and bagging groceries, but he was entrepreneurial by nature. He took a job at Sears to learn the air-conditioning trade before opening his business. The next 30 years of his life followed the same routine: get up early, repair heating and cooling units, go home, sleep. People called him a workaholic.

Johnson’s business was thriving, so he bought a dilapidated washateria. In the evenings he remodeled the interior and worked on the washing machines.

“Having to use my hands to make a living my whole life, and then they are affected like that, it limits what I can do,” Johnson said. “My ears are constantly ringing and my eyes were damaged. I try to distract myself and keep busy. There are so many different things I used to could do without any thought.”

Outside of work, Johnson was heavily involved in Greenway Church. President of the men’s ministry. Chairman of the finance department. Ordained elder. Unofficial counselor and friend to many. But he hasn’t been back to church since the accident. Not because he’s lost his faith. He simply isn’t comfortable being around large groups of people.

While in the hospital, Johnson’s son had to sell the washateria to pay for medical bills. King said they sold everything cheap because they needed quick cash. Who knows when, or if, Johnson will ever see the payout.

These days, Johnson is working on his mobility rather than mechanical repairs. His grandchildren often sit nearby, laughing and playing.

“G-Poppie, pick me up!” 3-year-old grandson Emari squealed on a recent afternoon, holding a toy saw. Johnson showed him how to use it while his other grandchildren, Trinity and Eric, giggled and jumped on his lap. Sometimes they ask what happened to his fingers. Most of the time the kids don’t see a man with physical limitations. They only see their G-Poppie.

Johnson can’t work anymore, but he still advises his nephew whenever needed.

Johnson wants to buy a new washateria and rental properties.

“I don’t walk around with my head hung down,” Johnson said. “If I’m not doing something, I’ll find something to do.”