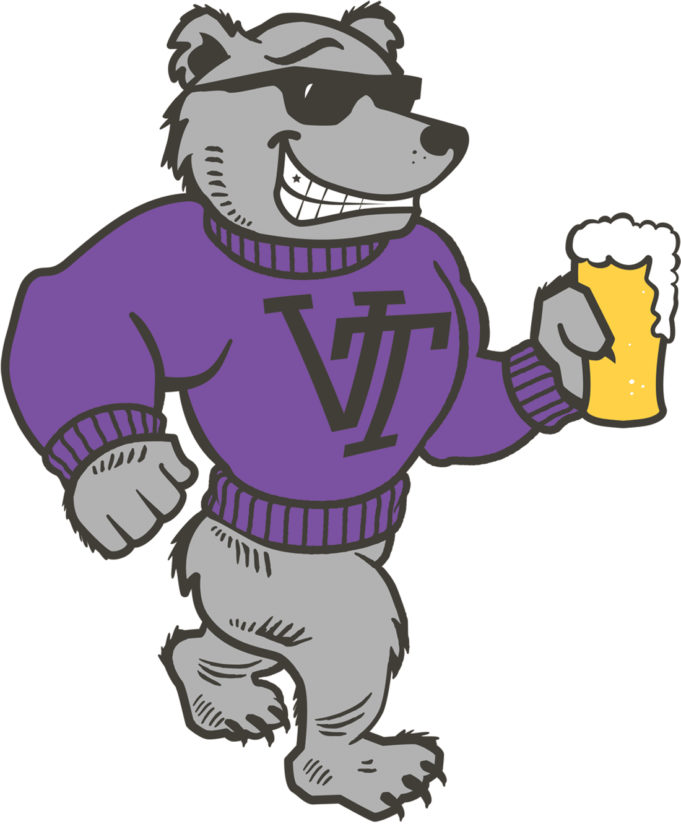 I have one question for the Varsity Tavern: Is your mascot a bear? I think it’s his gray fur that’s throwing me off, because when I picture the mural of him on the wall near the hostess station, my brain replaces him with either the Wisconsin Badger or that fat, gray cartoon cat from those Crazy Shirts you buy in Hawaii –– except instead of a red hat and sweater or aloha shirt, it’s clad in a purple, college-y sweatshirt, grinning and loping along with a big, frothing pint of beer in his paw. I guess there’s some kind of vaguely non-bear element about him –– not the sunglasses, his sunglasses are fine –– that makes me think he’s some kind of shapeshifter who can’t decide which party animal he wants to become, galumphing to something fun at the speed of Bud Light.

Varsity Tavern is a gigantic bar and grill directly across from Magnolia Motor Lounge. An intimate dive it is not. But it’s bright and spacious, with glass-paned, roll-top garage doors flooding the building with natural light. The doors open onto a patio, bordered in a metal fence and covered in AstroTurf. Furnished with picnic tables, the patio is like some kind of Platonic ideal of a lazy Sunday college afternoon –– besides pingpong and corn hole, there’s what amounts to a giant beer pong set-up. When I drove by Monday night, some college dudes were tossing four-square balls into red 35-gallon cans. Maybe in the spring the bar’s management can expand flip cup to similarly outsized dimensions? I bet that bear thing on the wall would sprint outside to see that.

Counting the patio, Varsity Tavern covers five zones: the main bar area, the lower level that opens onto the patio, an upstairs deck, and a lounge called Funky Sounds. As big as the bar is in the main area (I’ve seen loft apartments that were smaller), there’s plenty of room around it for mingling –– throw a DJ in there and I bet the place turns into a real meat market. I was there at lunch when business was slow, listening to some middle-aged guys discuss the profitability of blues CDs. I had a couple Shiner drafts while waiting on some steak skewers –– the food here is up-market bar food, but they’ve only been open for a week, so you might experience some kinks in its service. The atmosphere was neat, tidy, and unobtrusive. Its color scheme is a mix of gray brick and unfinished, reclaimed wood. The seating is a mix of black vinyl at the bar and gray and red metal stools, as well as a set of bleachers on the lower level leading out to the patio. This lower level has a Red Bull-branded DJ booth and stage, either for dancing or because you apparently can’t hedge your bets on having live music. I didn’t go up to the upstairs deck, but when I left, I peeked into Funky Sounds, sequestered in a room near the hostess stand. It’s illuminated with neon and black lights near the entrance and there’s a mural of Biggie inside, so I’m assuming this has some kind of hip-hop component to it.

Generally speaking, this is another big-box, high-volume, West 7th bar, with some different ideas (the giant beer pong looks like it’s probably fun, and there are coat check lockers in the front). I get the feeling that with the upstairs deck and the Funky Sounds lounge, VT’s owners don’t want to call it a sports bar, but there’s enough TVs to give Frankie’s Sports Bar a run for its money –– I counted two dozen, four of which hang from the ceiling like the ones at American Airlines Center. I mean, why else would you put bleachers in a corner of your room than to drive home the concept of sports? If anything, being a big sports bar is a nice contrast to the bombast and high-end aspirations of similarly sized places like Landmark and Reservoir. But that’s not to say it’s just a nice place to watch a game. Like the beer-drinking, fun-time mammal painted on the wall, Varsity Tavern is obviously ready to party. –– Steve Steward

The current print version of this column mistakenly states that Varsity Tavern shares an ownership group with the Local, Whiskey Garden, and two upcoming West 7th Corridor bars, High Tide and Trophy Ranch. Of the aforementioned bars, only High Tide and Trophy Ranch share an ownership group, but they are all awesome and you should go drink at all of them. Fort Worth Weekly regrets the error.