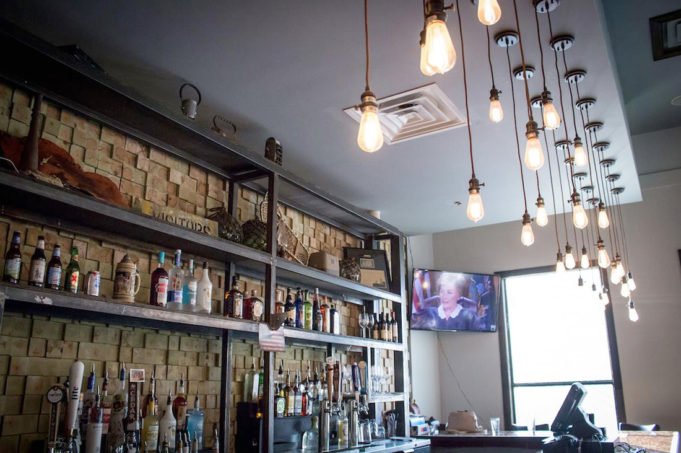 Chef David Hollister had a busy 2015. Along with opening Fort Worth’s two Dagwoods craft beer-and-giant-sandwich emporiums, one near Ridgmar Mall, the other in the West 7th corridor, he quietly helped launch a new TCU-area gastropub last fall. Common Ground Grill & Tap fills the space vacated by an English pub concept that never opened.

Like Dagwoods, Common Ground does have reclaimed wood on the walls, but the touch does not strike me as overtly “crafty.” However, given that this is a chef-driven restaurant in 2016, the menu throws a lot of up-market items at you. But it’s a nice-looking place, with a high ceiling and seemingly limitless square footage. The wood is used in interesting ways that brighten the space. The wall at the back of the dining room had me mesmerized. Covered in two-by-fours cut into two-foot sections and arranged side-by-side in groups of five, the wall is energetic without being busy, its boards lightly stained in shades of gray and brown, save for one in each grouping. That one is stained turquoise. Each group forms a quadrilateral “panel,” and the boards are oriented either vertically and horizontally, giving you the impression of a puzzle game whose players just got up to go get lunch.

Because Common Ground’s vertical space seems to go on forever, there’s a lot of wall area to cover. What the decorators did to fill in that negative space is add a smattering of the kind of found-object clutter you used to see at Chili’s, though at Chili’s, all those old toys and pennants and whatever else made sense. Here, there’s a random cuckoo clock near the bathrooms. Above a seating area that’s recessed from the rest of the dining room, there are vinyl records and their sleeves affixed to the wall. Similarly, the wall above the entryway is partially covered in rows of license plates. Both decorative portions appear to be works in progress, and I suspect they are there because someone who put money into this place insisted on tacking that kind of shit to the walls because college students or possibly even because there’s a Fred’s nearby and that’s what they put on the walls there.

Despite the odd “us too!” sensibility of the Chili’s-esque wall hangings, I really dug the vibe of the bar. Most of it. The cocktail menu, advertising four different kinds of Moscow Mules, was a little too lowest-college-denominator for my taste. I get it, though. Common Ground is in proximity to a lot of young drinkers with underdeveloped booze palates and large monthly allowances. Hollister and company would be foolish not to offer a bunch of fruity, fad-chasing concoctions. I think those drinks are ridiculous, but I’m sure there is an entire country of 22-year-olds who would disagree with me.

The bar itself was my favorite part of Common Ground. Exposed light bulbs hang from the ceiling, illuminating a bar top covered in pennies beneath a layer of clear acrylic. Behind the bar, the liquor is displayed on a huge metal shelf that’s probably as wide as it is tall. Behind it are the unstained ends of wooden four-by-fours, each square a different thickness, and I found myself idly contemplating the back bar’s vertical topography. In other words, if you get a little blazed before you grab a beer at the bar, you might catch yourself blissfully staring at a wall.

Besides high-end food and a decent selection of craft beers, Common Ground has happy hour from 3 to 6 Monday through Friday (and a reverse happy hour from 9 to close) and on Thursday nights karaoke.

If nothing else, it’s a subtly sophisticated stop for drinks (or braised Akaushi tri-tip!) near TCU that isn’t overtly college-oriented. Most of all, it has me really interested in what David Hollister comes up with next. –– Steve Steward