Arlington singer-songwriter turned Nashville budding star Maren Morris made the most of her SXSW gig yesterday at the Spotify House in Austin. At least the North Texas’ two major dailies think so.

The Dallas Morning News featured Morris in a large GuideLive article. Music critic Hunter Hauk said the packed crowd and enthusiastic response indicates Morris will be an “early draw for concertgoers during the arena tour on which she’s embarking with headliner Keith Urban.”

Morris’ “My Church” is getting national radio play. She’s got a Nashville publishing deal and is releasing an album on a major label in a few months. Hauk compared the confident nature of her songs to those of pop stars like Rihanna and Beyonce.

Some people around these parts might still recall Morris as the cute little teen-aged girl singing pretty songs around town. But she’s 25 now and not afraid to cuss and drink a little. She’s holding a beer in the photo that accompanied Hauk’s article. Hauk even had to bleep her in his story when she used the word asshole.

Fort Worth Star-Telegram music critic Preston Jones praised her in his dispatch as well, saying she “commanded the main stage with the practiced ease of the star she has always been” and had the crowd singing along to “My Church.” 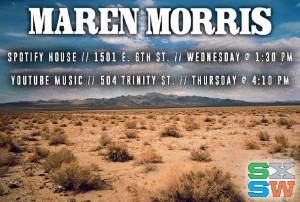