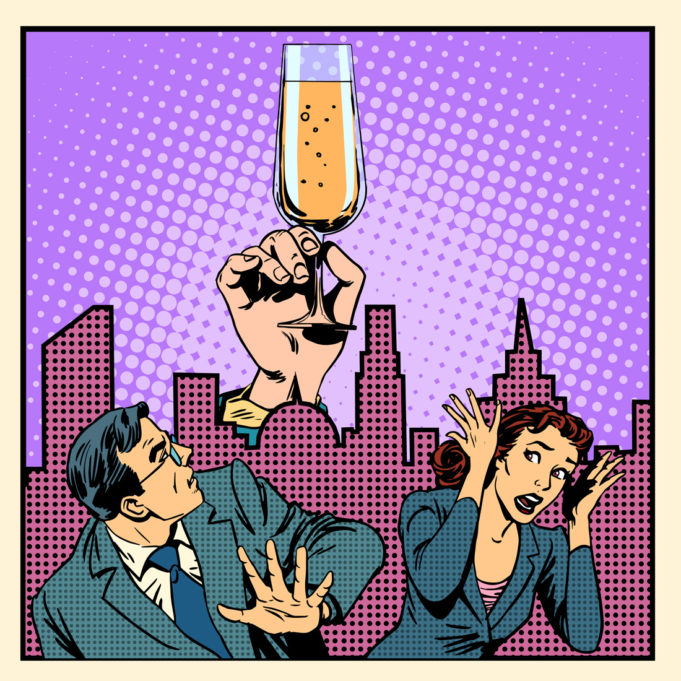 I’ve gotta hand it to full-blown alcoholics: Your struggle sounds brutal, and if you are able to overcome that dependency and save yourself from sinking to the bottom of a bottle and drowning, you deserve a medal of valor.

I say that with all sincerity, because as I write this, I’m on the third day of a five-day forced abstention from alcohol. The short of it: I have to take this dumb medicine for a stomach problem that apparently happens when you hit your late 30s, and it has an amusing side effect when paired with booze. My doctor put it thusly: “If you drink alcohol with this drug, you will vomit. Violently.” Now, I’ve certainly laughed at myself after splashing a curb with a toxic stew of dinner and too much Jameson. But overall, fuck vomiting. Fuck it right in its chartreuse, bilious ear.

Adhering to my mandate hasn’t really been a problem. I won’t insult the intelligence of anyone battling a serious alcohol problem by suggesting I know what you’re going through, but at the very least, I can appreciate the way your brain might feel when you are prohibited from giving it what it wants. Craving a drink is a reaction to many, many situations across a wide range of contexts. I grasp how those feelings of mental and physical discomfort are not so easily ignored. Again, if you are able to kick your problem despite the barrage of stressors and boredom that triggers your urge to level out with alcohol, I admire your fortitude, will power, and desire for change.

If you ask me, though, my drinking is moderate. Oh, not moderate by my doctor’s standards. (And why are there only, like, three degrees of frequency on that scale?!) But I can go hours, days, even weeks without imbibing. But if we’re being honest, it is probably telling that I picked up my prescription on Thursday yet held off starting my course until Saturday. More honestly, it was because I had a gig Friday night. Playing it sober wasn’t exactly out of the question, but that didn’t sound as much fun as it did a recipe for anxiety. Saturday, however, was go-time. I had another show to play that night, this one at The Grotto, but I was going to have to do it sober, on account of the goddamn vomit pills. Well, alcohol-free, anyway. The last time I played without smoking any weed, I ended up fighting off a panic attack. You can probably guess how. It rhymes with “Niller Hite and mourbon.”

Anyway, I drove to The Grotto and loaded in gear, the first two parts of a sequence normally ending with the first beer and shot of the night. In the absence of that dénouement, I was struck by how … prominent the urge for a drink actually felt. It was like smelling sunscreen and picturing a beach towel or reading a sign that says piso mojado and not hearing the sound of someone slipping and smacking his head on the floor at a McDonald’s.

It was a weird feeling. So weird, in fact, that I found myself leaving and wandering around just to avoid temptation and kill time before our set. Eventually, I passed the recently opened King Crab Tap House in Montgomery Plaza. Sports glowed invitingly through the restaurant’s windows from a row of contiguous TVs above the bar. The place looked busy but not so busy that you couldn’t sit at the bar by yourself and not be bothered. All of those windows give you a decent view of the tap wall, and that made me want nothing more than to sip on a cold, frosty draft and zone out in front of the Rangers game for an hour. Setting that thought aside kind of made me sad.

Two days later, I guess I’m over it. If I had to give up drinking for good, I could do it. But I know it’s not so simple for a lot of other people, and that’s something I never really understood until I had the choice to drink temporarily taken from me. If you know you need to dry out, I hope you aren’t afraid to get help if you can’t do it on your own. –– Steve Steward