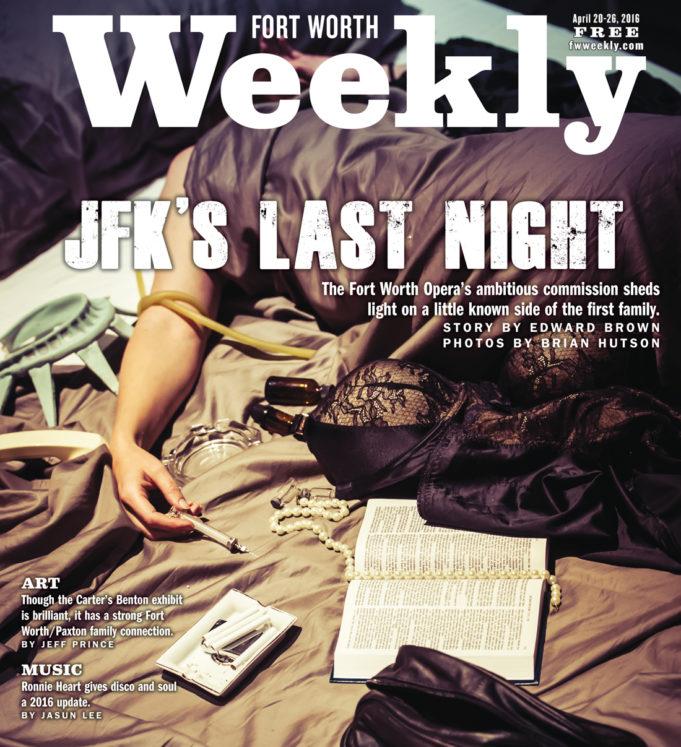 In a dark hotel room, the first lady is awakened by a nightmare. A dimly lit bathroom can be seen through an open door nearby. Inside, the body of her husband is slumped over.

Morphine pills are scattered around him.

Jacqueline shouts for help. An alarmed secret service agent enters and walks the groggy president back to his bed. Before the agent leaves, the first lady asks for his discretion. The public can’t know about the Jack’s debilitating and painful back problems that he copes with using morphine.

“Of course,” the agent says and leaves.

As he is in this scene, the 35th U.S. President is seen as all too human in JFK. Created by composer David Little and librettist Royce Vavrek, the opera –– commissioned by the Fort Worth Opera to commemorate its 70th anniversary and its festivals’ first decade –– offers a sharp contrast to the triumphant and sometimes even mythical stature of JFK, that of an athletically built, charismatic leader who chartered the United States’ path to the moon and brought the world back from the brink of nuclear war.

The fresh perspective, in part, came from personal information about the Kennedys that had been suppressed until recently.

“The whole media landscape has changed,” over the past 50 years, Little said. “I didn’t know he was taking drug cocktails. There are things written about now that weren’t before. We decided to explore Jack and Jacqueline as people and not myths.”

The opera is set almost entirely in Fort Worth, where the Kennedys spent their last night before the November 22 tragedy in Dallas.

The choice to highlight Fort Worth, Woods said, was made to add historical balance to the presidential visit that has been overshadowed by Dallas for decades.

“I never wanted the narrative to shift to Dallas,” Woods said. “We all know what happens the next day. I felt the opera should leave the assassination out.”

FWO’s artistic team has high hopes for JFK. The opera has taken five years and $1.3 million (a FWO record) to produce. Woods said he is confident the new work will remain in the modern canon for years, or possibly decades, due to the new perspectives on the Kennedys’ personal lives and the quality of the score.

For now, FWO musicians and staff are focused on what they can control, putting the finishing touches on an ambitious work before it premieres on Saturday.