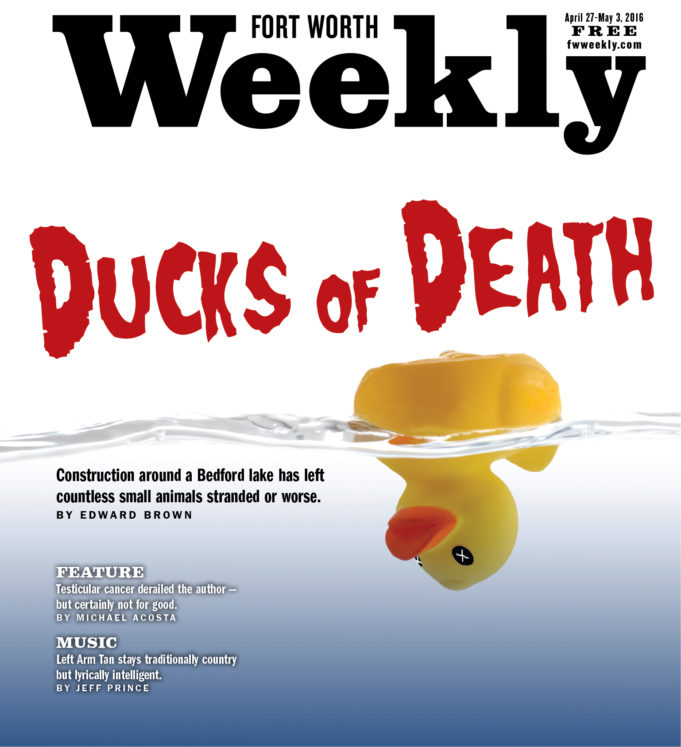 The other day at Bedford Boys Ranch Lake, a jogger was momentarily distracted by a dead duck floating on the surface nearby.

But is it? Over the past nine months, more small native animals than anyone would care to count have been croaking in and around the 274,000-square-foot recreational facility in North Bedford. The problem, according to some residents, is that by trying to help improve the quality of the water and environment the City of Bedford has only hurt the local fauna. City officials counter that every precaution has been taken to ensure the safety of the animals. No matter who’s right, one thing is for certain: Small animals keep dying in and around Bedford Boys Ranch Lake.

Bedford resident Terri Robb first noticed changes at her favorite spot last July. That was when the lake was drained and then dredged as part of a $3.2 million city bond package passed in 2013. The aim was to improve the lake’s channels and surrounding trails and upgrade recreational facilities at the 62-acre Boys Ranch Park, where the lake is located.

She didn’t pay much attention at first. The construction project was well known to area residents, and she assumed city officials had plans for the lake’s wildlife: Muscovy ducks, waterfowl, turtles, migrating geese, and, occasionally, coyotes.

But as the water receded and eventually disappeared altogether over the course of a few months, hundreds of stranded animals made it apparent that help may not be coming.

Alarmed, Robb and other residents and lake visitors purchased small plastic swimming tubs and filled them with water in an attempt to save the ducks that had called the area home for years.

You might think the residents were overreacting. Birds can just fly away, right? But they weren’t, and the turtles had fewer options.

While Robb and several volunteers kept the tubs full and bought cracked corn to feed the waterfowl, city employees and contractors continued work on the project, with most of the construction ending last month.

Bedford Mayor Jim Griffin, in an e-mail to the Fort Worth Weekly, said the recent construction in and around the lake is part of a series of projects that are leading to “tremendous economic growth” for Bedford. Griffin rebuffs Robb’s accusations, saying that he and his staff took adequate steps to protect wildlife in the area.

“The city staff worked under the direction and advisement of [the] Texas Parks & Wildlife [Department] during the construction process of the lake,” he said. “Several measures were taken to ensure the safety and well-being of the wildlife.”

Those steps, he said, included relocating fish prior to draining, relocating turtles after the lake was drained, and providing clean water to waterfowl on a daily basis.

“The majority of feedback that has been received by city council and city staff has been overwhelmingly positive,” he added.

Robb said she never witnessed any ducks being relocated. If there were turtles moved, she added, the city missed most of them.

Recently, a pristine two-foot-high brick embankment was laid around the lake’s perimeter. With the help of heavy rainfall, the large dredged hole soon filled.

But the animals continued dying.

Robb and several residents who spoke with the Fort Worth Weekly said they witnessed turtles and baby ducklings that were unable to scale the new embankments. Seeing animal carcasses became a regular sight, several residents said.

The one 2-by-4-foot ramp included in the city’s plans which was built has not been able to ameliorate the problem, Robb said. The embankments also created problems for the coyotes and foxes that use the lake as source of drinking water, Robb added.

Earlier this month, city officials responded by constructing three rock ramps around the lake. The large stone slabs dip into the water at 45-degree angles.

While many area residents welcome the measure, it does nothing to solve the problem of food.

“There is zero [naturally occurring] food in that lake,” Robb said. The city “took the ecosystem down to ground zero.”

To raise public awareness, Robb recently started an online petition, asking the mayor and city officials to provide wildlife in and around the lake with floating islands, shelter, and food. The online appeal is 123 signatures away from its goal of 1,500. At that point, Robb said, the petition will be delivered to Mayor Griffin, City Manager Roger Gibson, and Assistant City Manager Kelli Agan.

On a recent weekend morning at the lake, Robb and four area residents –– Paula Botero, Barbara Hughes, Helen Martin, and Joyce Powell –– were feeding turtles and ducks while keeping an eye out for sick, injured, or dead animals. The routine has become a daily ordeal for the friends, who first met at the lake last summer when the crisis began. Feeding the animals is expensive, the friends said. They estimate they have each spent several hundred dollars out of pocket so far. The friends also keep an eye out for young children, who might fall off the embankments and into the murky lake water.

“We’re not wanting to pick a fight” with the city, Robb said, “but something has to be done. This has been a sloppy, hideous process.”

This article was updated on May 3 to correct the location of the park.