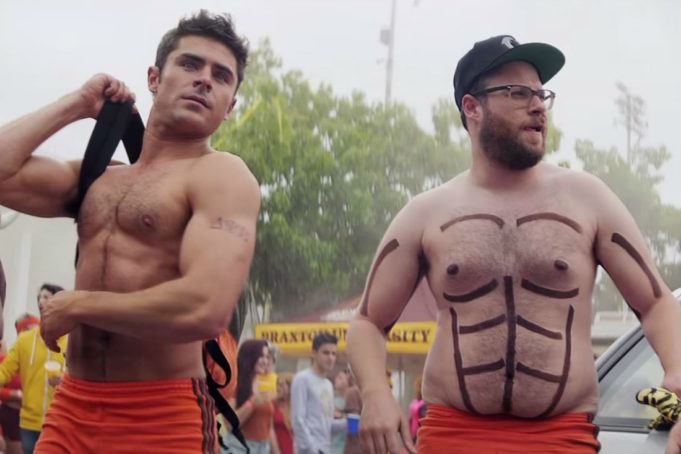 I try not to read other people’s reviews of a movie before I’ve seen it and written up my own critique, but I do try to get a fix on the general tenor of whether people think it’s good, bad, or indifferent. I had trouble doing that with Neighbors 2: Sorority Rising. Is it a funny, weirdly feminist corrective to the 2014 hit or a tired retread? Well, I saw it for myself over the weekend, so now I can say that neither assessment is entirely off the mark.

Seth Rogen and Rose Byrne return as Mac and Kelly Radner, who are now pregnant with their second child and ready to sell their house to move into a bigger one. Meanwhile, college freshman Shelby (Chloë Grace Moretz) decides that the whole Greek system is full of crap for not allowing sororities to throw parties, so she founds her own independent sorority called Kappa Nu and starts throwing parties at the old Delta Psi house next door to the Radners’. She’s helped by Teddy Sanders (Zac Efron), who’s stuck in that post-college rut and wants revenge on the Radners, but when the girls oust him for acting too much like an old fart, he joins the Radners, who want to push out the girls so that they can close the escrow period.

This feels like a necessary corrective to the first movie. The original Neighbors skated right up to the edge of the dark side of frat life and seemed to tremble before it, but here we get to see that from the girls’ point of view, as they go to a frat party, watch other girls being reduced to sex objects, and come out saying things like “It was super-rapey in there.” It’s great to have Teddy brought up short when the girls point out to him that all his frat parties had “ho’s” as some part of the theme, and it’s revelatory to see Kappa Nu feel pressure to conform and make their parties like all the frat parties that they despise.

However, as well-intentioned as this is, the five male writers here leave something to be desired in the execution. These girls don’t have any sex, and I think how these characters might express themselves sexually in a way outside the traditional framework eludes these writers. Ironically, they’re more comfortable with male homosexuality — in the form of the subplot with Teddy trying to deal with his best friend (Dave Franco) coming out of the closet — than they are with women. What are Kappa Nu’s parties like? Surely the girls are doing more than watching their DVD of The Fault in Our Stars. The bit with Kelly giving a feminist pep talk to the girls at the end is clumsy, and though Moretz tries gamely, the part of a pot-loving party girl doesn’t fit her.

Still, this thing did make me laugh on a number of occasions, like when Teddy shows himself to be a math wizard only when he’s dealing with weed, or when Teddy’s black frat brother Garf (Jerrod Carmichael) describes his new job as a cop: “They want us wearing body cameras now. What am I gonna do, shoot myself?” Increasingly, it looks like the real star of these movies is Efron, who has made his frat-boy caricature into something complex and alive as Teddy flails about trying to deal with a world that his college life ill-prepared him for. Neighbors 2 almost certainly won’t make my year-end Top 10 list the way the first Neighbors did, but it was pleasant enough company for a while.