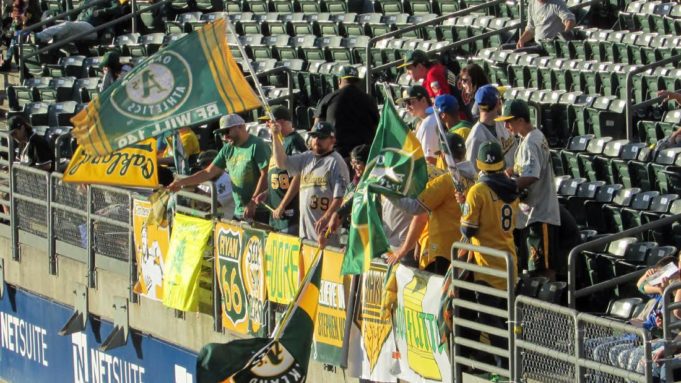 If the Cowboys played the Cleveland Browns in the Super Bowl at the same time a last-place Rangers team took on a first-place Oakland A’s squad, how big a crowd would the baseball game draw?

Yes, I realize it’s a preposterous scenario: the Browns in the Super Bowl.

This proposition occurred to me while walking past the “Free Draymond” shirts into the Oakland Alameda Coliseum yesterday to watch the Rangers play the Athletics. That same evening, the Oracle Arena next door hosted Game 5 of the NBA Finals, with the hometown Warriors having an opportunity to clinch their second consecutive championship against visitors from Cleveland. The games started one hour apart, with the Dubs tipping off first. 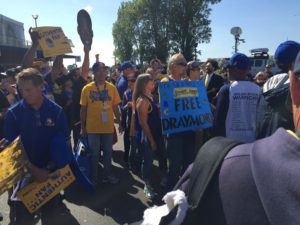 The two Oakland venues sit even closer to each other than Globe Life Park in Arlington and AT&T Stadium. They share parking lots and, until last season, long periods without championships (a distinction that unfortunately still applies to their Arlington counterparts). The Finals game sold out, as would a Super Bowl. But how did the A’s do attendance-wise?

I admit that I conceived this column with a bit of the stereotypical NASCAR approach: I wanted to see a wreck. See, the Green and Gold don’t draw well even without a North American championship match occurring next door. The perennially average in the bottom third of MLB, and the just over 18.5K they’ve averaged this season ranks in the bottom three. I imagined a crowd made up of the players’ families, the media, and Draymond Green.

They had pleasant weather for last night’s game, but that was about all it had going for it. Scheduled Rangers starter Yu Darvish might have drawn some walkup interest from local fans who followed him in Japan, but the Rangers put the righty on the disabled list just before the game with right shoulder discomfort. Darvish’s replacement César Ramos might have had some family drive up from his native SoCal to see his start, but apparently not quite enough Ramoses made the trip to fill the coliseum. It was probably for the best – he gave up six earned runs in 3 2/3 innings as Texas lost big. 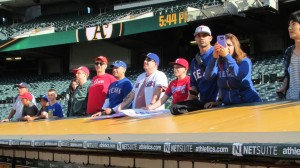 I kind of thought we had at least a chance to have more Rangers fans than A’s supporters, but the Oakland faithful proved me wrong, although a lot of them did wear Warriors garb. During batting practice, we heard a few gratuitous cheers break out from fans following the hoops on their smartphones. That subsided once the baseball game began, though, replaced in at least one instance by a loud, out-of-nowhere “Texas sucks!” exclamation.

So the crowd may not have been big, but those who did attend had some personality, confirming what has always appeared to be the case on TV. For instance, I didn’t wear anything to indicate I had come from Texas, but a young man who appeared to be an A’s gameday employee nonetheless felt compelled to tell me he thought America had gotten past discrimination because two special ed students, both named Bush, had managed to get elected president. I feel like I’m reasonably creative, but I couldn’t have made that incident up.

I also spotted a guy with a Dave Stewart jersey and a Rollie Fingers/Salvador Dalí mustache. Heck, as far as I know, it might have been Rollie Fingers.

The games happened on a Monday, which is a tough baseball draw even in the best of situations. The Rangers would fight the calendar, too, if the NFL played our mythical summer Super Bowl as a Monday Night Football game. The ballclub has never played at home the same Monday the Cowboys played at AT&T Stadium. The last time the MNF and MLB overlapped in North Texas, the then-2nd place Rangers drew 13,356 on September 15, 2008, their second-smallest crowd of that season, as the Cowboys sold out Irving’s Texas Stadium. 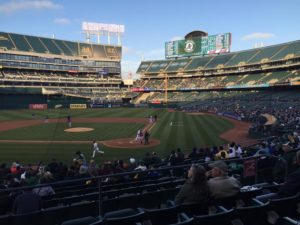 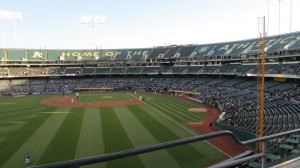 Yesterday, the A’s announced an attendance of 13,453. You can look at the photos and judge whether the stadium (capacity 35,067 in its normal baseball configuration without the upper deck) looks more than a third full. They’ve reported 11 crowds smaller than Monday’s this season. I wonder what those looked like. 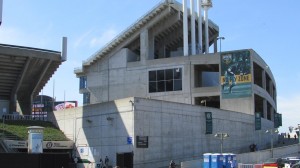 In fairness to the fans who stayed home or went next door, the team does play all the games in this particular stadium. It opened in 1966 and is the last remaining facility that still hosts both Major League Baseball and NFL football (at least until the Raiders move again). Tarps cover the upper decks to make the concrete monolith a sliver more intimate. I’ve kind of disliked the place since one of its denizens goaded one of my favorite players, Frank Francisco, into an ill-advised chair toss during a 2004 pennant race, but I actually didn’t hate it now that I’ve been here (not that there aren’t plenty of better stadia out there).

The fans who did come to Monday’s game had to pay $40 a carload to park, the inflated rate for an NBA Finals game. The A’s will make it up to any fans who return tonight by letting them park gratis, thanks to a Chevy Free Parking promotion.

The Warriors lost Monday, so if they don’t finish the series in Cleveland, the A’s will have to contend with Game 7 this Sunday when they host the Angels. Luckily for the baseballers, their contest that day starts seven hours earlier than the basketball game.

The Rangers have never drawn fewer than 26,131 against a same-day AT&T Stadium Cowboys game, that coming last September 13. That’s probably not an apples-to-apples comparison to how much a Cowboys playoff game might impact a baseball crowd, especially since the Rangers have mostly been a good team since the big spaceship opened. If they were lousy, all bets would be off.

Luckily, thanks to the way the schedules fall, they’ll never have to worry about it . . . although . . . given the Cowboys’ power to generate ratings, the networks might well be happy to look at moving the big game to June if it somehow made the Pokes more likely to play in it. If that happens, anything’s possible – even that the ‘Boys opponent might be the Browns.