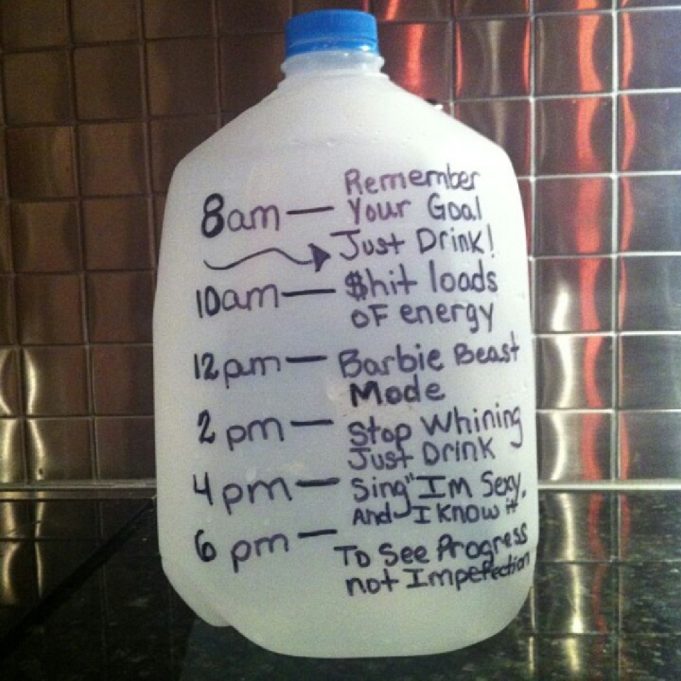 “Pull over!” I screamed to my fiancé while pointing frantically at the rapidly approaching Shell station. “Now!” He obliged and pulled in. I jumped out of the car and busted into the gas station with the authority of an FBI agent. “Where is your restroom?” I demanded. The clerk pointed in the general direction and I ran off praying I would make it in time. That was day two of the Water Gallon Challenge.

I don’t drink water by itself. Ever. The closest thing I drink to water is iced tea, and I add Sweet ’N Low to that. My body wouldn’t even know what water is, except that food contains it. But I accepted the Water Gallon Challenge –– drinking a gallon of water every day for a week –– thinking my tattered system would relearn what it was like to be hydrated.

Drinking a gallon of water a day is a full-time job. You are either constantly A.) counting ounces or B.) peeing. At least I’ve had a lot of practice chugging other things. Finally, that skill was going to pay off in spades. So, the actual drinking of the water wasn’t an issue, it was just a giant pain in the ass.

Everywhere you go you have to locate the bathroom first. And before you leave, you have to relieve yourself preemptively. Your new routine looks something this: Have go to Target? You’d better go to the bathroom. Once you arrive, head straight to the bathroom. Then you leave Target cursing yourself for not going to the bathroom before getting into your car, rush home, and run to bathroom praying you don’t pee on yourself –– and hope the milk you left in the hot car doesn’t turn into something with the consistency of a bundt cake.

I typically start most challenges at 100 percent right out of the gate, then I tire quickly around the third day. I followed my typical pattern for this water bit.

Day 2: I Woke up early and drank 51 ounces of water. The second day was pretty much like the first. I finished all my water by 3pm and was pretty proud of my accomplishment. I walked around the office spouting off about the changes in my diet and how I was going to make this part of my normal routine. My bragging was always followed by, “I’ll be right back!” Another trip to the restroom.

Day 3: Throughout the day I would think, “Did I write down the last trip to the bathroom?” Then, I remembered in Weight Watchers you could count half your water as tea … I bet Spark counts as water … yeah, let’s just add this Spark to these 64 ounces… OK… I’ll have iced tea. Shockingly, I didn’t have to go to the bathroom half as much as the previous days.

Day 4: I was all about Spark and iced tea and half-heartedly  jotting down when I went to the bathroom. My heart wasn’t into it, but my bladder finally caught a break.

Day 5: I decided I was over it, and I’d try to drink water when I could. I had an almost hour-long flight to Houston, and I didn’t want to ruin my trip with constant bathroom breaks.

I’m not opposed to water. I just think it taste better accompanied with other things. My liver is pissed I didn’t jump all over this water bit and incorporate it in my daily life, but my bladder doesn’t mind at all.