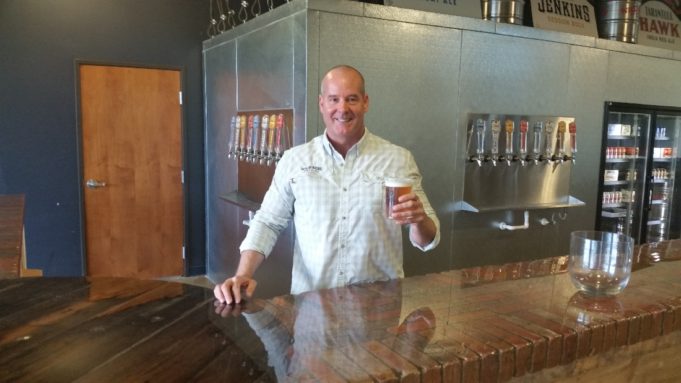 I first wrote about Wild Acre several months ago and spoke with its founder John Pritchett. This week, I wanted to get to know the man behind the beer.

The Tennessee-native’s journey to Fort Worth has been an odyssey fueled by a love of making beer. His early career as an electrical engineer for Motorola in Austin was never really fulfilling, Kraft recalled. It was a chance swig of Sierra Nevada Brewing Company’s Celebration Ale at the time that planted the homebrewing itch. Kraft read Charlie Papazian’s “Joy of Homebrewing,” began volunteering at nearby breweries, and eventually took the plunge to study at the famous Siebel Institute of Technology, a brewing vocational school in Chicago.

His first break came when he was hired as co-brewer at the now-shuttered Hubcap Brewery & Kitchen in Dallas. The next year, he changed jobs to work at a nearby brewpub, TwoRows Classic Grill (also now closed). Those early years came with a steep learning curve, Kraft said.

“Each brewery presents its own unique challenges,” he said. “Brewing is very complicated because there’s so much to know. No one can know everything, but I like to think I’m a jack of all trades.”

As an example, Kraft cited a textbook dedicated entirely to beer foam stability. (No joke.)

Looking back, Kraft sees the numerous brewery positions he’s held as a search for an ideal space where he could brew without compromise alongside a motivated support team. And the city mattered too. World-famous Lagunitas Brewing Company in Chicago couldn’t hold him for long. He just didn’t fit in the city.

Early last year, while consulting for Nine Band Brewing in Allen, Kraft saw a job opening in Fort Worth through the brewery networking site probrewer.com. The veteran beersmith was already a fan of the “city with a small town feel,” as he put is. After meeting with Pritchett and realizing the potential scope of the Wild Acre vision, Kraft was sold.

During our interview, we sampled Wild Acre’s four brews. There are several longish reviews online already so I’ll summarize my thoughts. All four beers are crisp, balanced, and clean, offering more than enough nuance to satisfy discerning palates without the syrupy, boozy profiles that have become popular in recent years. Kraft laid his brewing philosophy out simply.

“I’m old-school,” he said. “I like to make clean and well-balanced beers. You won’t find me making a smoked/raspberry/jalapeño/bacon ale. Sure, I’ve done some nontraditional beers. There’s a time and place for that, but I prefer to pick a beer style and execute it very well.”

For now, Kraft’s odyssey appears to be at an end. He’s worked almost every position possible in the brewing side of the beer industry. A successful brewery needs more than a good brewer, Kraft has learned. Pritchett offered Kraft the resources he needed to pursue his brewing dreams at Wild Acre.

One month in, Kraft said the new Fort Worth brewery could have the reach and recognition of large regional breweries in the near, foreseeable future.

Come try Mike’s “Kraft-y” beers for yourself every Saturday from 12:30 to 4pm where $15 gets you four tokens redeemable for pints of Wild Acre suds. The fourth token can be used to purchase a commemorative pint glass or a fourth brew.

The Weekly is proud to announce its second annual homebrewing contest as part of North Texas Beer Week. We are still finalizing details, but now would be a good time to start planning for the November 20th event at Panther Island Pavilion’s The Shack.

It’s not too early to start planning for Texas Beer Camp, an annual 24-hour festival “where you can bring your own beer, share your beer with fellow campers, listen to some amazing music, learn about home brew, watch home brewing demonstrations, and make new friends.” The camp takes place October 1 and 2 in Princeton, Texas. More information is available here.