Singer sewing tables, oil lamps, and china patterned with feminine chintz were once the staples of antique collectors in the 1990s. Thanks to the popularization of “picking” –– the hipper way to say “antique shopping” now –– the antique craze has seen something of a revival in the last few years, but why now?

Turn the TV Guide back to 1997, when PBS aired the first episode of Antiques Roadshow, and we can pretend like we saw that trend coming. Who expected the roadshow to reign supreme as one of the most watched shows on the network? This year marked the first ever tour stop in Fort Worth, bringing a strong showing of 18,800 antique holder applicants, 3,000 of whom were awarded tickets for entry on Saturday, July 23, at the Fort Worth Convention Center. More than 70 appraisers were on hand to tackle 24 categories of antiques. I’ve never seen so many people excited to stand in line for hours holding what could be proclaimed nice-looking junk.

Then again, I own no antiques of note despite having been raised in heavily-antiqued homes. Last spring, my pro-picking friend, TCU English Professor Dr. Carrie Leverenz, shared her tried-and-true criteria with me: “It has to be useful, beautiful, or meaningful.” With this advice in mind, I spent too many afternoons rummaging around Historic Handley and the Near Southside for early 20th-century candelabras or any antique striking a chord of sentimental feeling with me. Nothing. Perhaps I resist romanticized notions of the past, or perhaps I don’t know enough about the craftsmanship of yesteryear. Either way, interviewing the roadshow’s executive producer, Marsha Bemko, helped me see antiques in a new light. 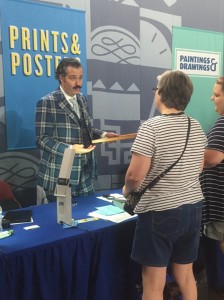 Bemko, who’s been producing the show for more than 16 years, sports a spiral notebook on set, commenting on and grading antiques while the cameras roll. The sound of her voice somersaults us through the day’s findings, landing for a while on an antique table belonging to a woman who was photographed with the piece in her great-great-grandfather’s home. That table was appraised for $20,000-30,000 at auction price. If you watch the show, you know that auction price appraisals tend to be conservative estimates as opposed to the higher price tags that accompany insurance price appraisals. Bemko was in awe of another antique: a 400-pound 17th-century lockbox laced with Baroque embellishments and an intricate locking mechanism visible inside the box. Auction price? $10,000-$15,000.

But halfway through the day, the top-dollar item wasn’t furniture.

“It was a collection of 1960s NFL championship rings and Super Bowl rings along with a charm bracelet because the wives were given charms,” Bemko said, raising that last vowel up and out of “charms” in an unabashedly Bostonian manner. The collection holders are the daughters of former NFL player Henry Jordan, who made several Pro Bowls while suiting up for the Cleveland Browns and the Green Bay Packers. The daughters shared stories from their father about Vince Lombardi, Bemko said, and Jordan’s most famous quote about the legendary Packers coach: “Lombardi treated everyone the same –– like dogs.”

The auction price of the collection came in at $75,000-100,000. The insurance price appraisal was $150,000-200,000. Bemko informed me that not every tour stop yields six-figure antiques, but the history of the rings and the story the daughters brought with the collection added some sparkle.

Earlier in the day, Dallas-based appraiser John Buxton said, “In the second year, we did a survey and asked viewers what they watched for. Naturally, we all thought they’d say the money, but the No. 1 reason was the story, and the No. 2 reason was the educational value.” 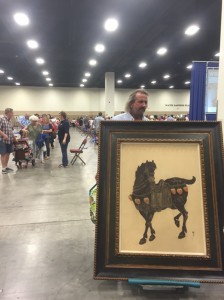 In the art world, we call the origin story of a piece the provenance. Who created it, owned it, destroyed it, and saved it adds or detracts value to the piece. Not once did I hear “provenance” tossed around on the set of Antiques Roadshow. Every person on set said “stories,” and every person had stories to share.

In that moment, listening to the roar of stories building above the crowd, the advent of the antique craze was making more sense: Antiques allow us to be storytellers. Stories add value to our lives. Stories that travel with antiques become our own to carry forth.

The antique craze also seems to be part of a larger paradigm shift that Lane Relyea captures in his 2013 book. In Your Everyday Art World, the art theory professor at Northwestern University contends that museums reinforce the divide between those well-versed in art criticism and history versus those who couldn’t care less about chiaroscuro. I’m hesitant to blame museums for this divide, especially when we see the Amon Carter Museum of American Art and other local museums going to great lengths to make art more accessible to children, the elderly, and the visually impaired. In fact, most docents at the Carter welcome stories from guests who take their tours. To my point, stories make art accessible. I see antiques as being the carrier of everyday folks through what was once an elitist barrier, the artistic membrane. On the other side, everyday folks become everyday art collectors. 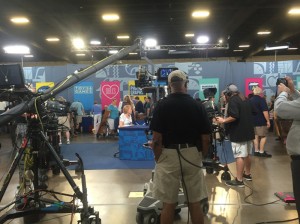 Before I toured the Antiques Roadshow, the cobalt blue aesthetic of the set dotted with appraisers in tailored suits reminded me of The Kennel Club of Philadelphia’s National Dog Show. By the end of the tour, the look of the set seemed more blue collar in color, though, shaded further by Bemko and Buxton never putting on any artsy airs with me. And despite Buxton’s status as a Dallasite, he easily won my favor when I asked him how Fort Worth compared to its big sister city to the east.

“This is more small-town America, and the people are very friendly, very down-to-earth.” he said. “You see far more cowboys than you’d ever see in Dallas, and [these cowboys] have good stories to tell.”

Production begins after the tour ends in mid-August. Season 21 begins on Channel 13/KERA in January 2017. 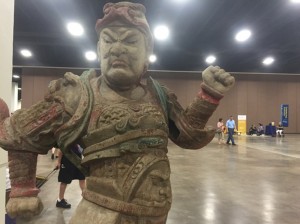