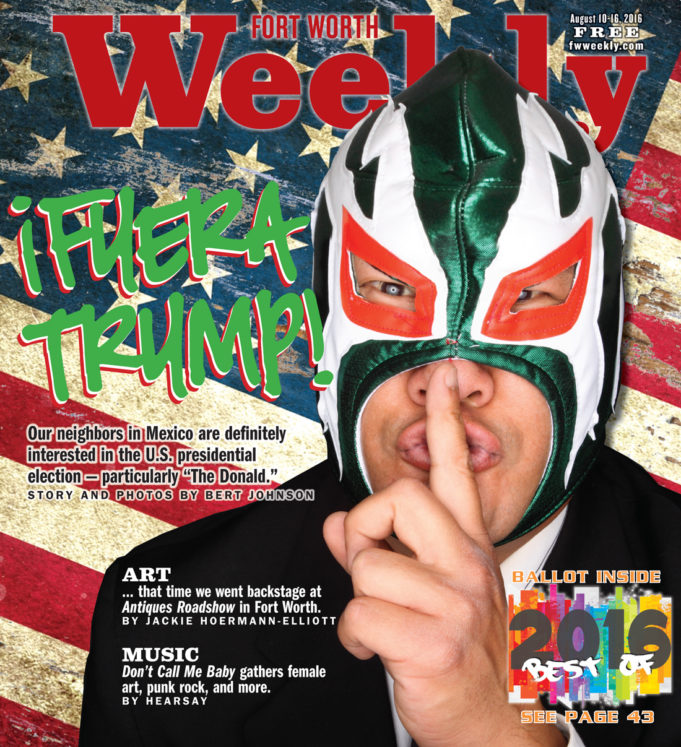 At Mexico City’s historic central square, or zócalo, Jose Adan Garcia Canales was busy balancing a small pipe organ on a wooden peg. He turned its crank, and the instrument let out a shrill tune reminiscent of circus music. Garcia’s partner strolled amid the shoppers, tourists, and vendors, with a hat in hand, asking for change.

The organillero, or organ-grinder, is one of many in the capital’s massive unofficial economy. He’s a man of the people, with his fingers on the pulse of the city, and that’s why I asked him about one of the most pressing issues in Mexico today: Donald Trump.

What does the everyday Mexican think of “The Wall,” or Trump’s plan to send 11 million undocumented immigrants living in the United States back to Mexico, among so many other contentious proposals?

Garcia’s response was to the point: “They’re very radical,” he said in Spanish. “I don’t like them.”

In the weeks leading up to the Republican National Convention, I interviewed a number of Mexico City residents — from teachers to musicians to fellow journalists — about Trump, and whether the demagogic candidate had changed their perception of America.

Responses varied. While the organillero didn’t believe Trump would win the election, some predicted that Trump would take it all in November. Others hinted at a conspiracy between Trump and Mexico’s president. A few bluntly compared Trump to Hitler. And some likened his campaign to a stunt, instead of an honest attempt to win the White House. Lots of people described the man with the darkest of humor: His campaign is a joke but not a funny one.

One common theme emerged from all of these interviews: Trump has to go.

Fabiola Valdez Guierrez is a Spanish-English interpreter — but her message for Trump needs no translation: He will never build “The Wall.”

If he is elected and does try to push a wall, she believes that a litigious private sector on both sides of the border would stop his plans in the courts.

“Mexican companies have American partners that would likely lose money, as well, and I cannot see the federal government trying to solve all the possible lawsuits that will be surfacing” because of the wall, she explained.

Like many people I interviewed, Valdez was cynical about Trump and his bombastic style.

“He presents himself as a great business success, but a lot of reporters have caught him lying,” she said.

She thinks his No. 1 motivation is to further his Trump brand with scandals and constant media attention.

But “his message is so full of ignorance that it is a joke to think that his proposals are serious,” she said.

Is there anything new about Trump’s brand of bigotry?

Valdez doesn’t thinks so, calling it a byproduct of “a racist America that is still palpable and very alive, present in a lot of cities.”

The only surprise is that’s he’s a legitimate major-party candidate, she said — one supported by extremists who “won’t recognize the multiculturalism in their own country” and who want “to go back to an America that never existed.”

For Valdez, that’s why Trump’s popularity is ultimately scary: It validates the idea that “racists think they have the right to impose their worldview on the rest of the population and, ultimately, the world.”

Despite her concern about Trump and his supporters, she said that his vision is basically a punchline in Mexico.

“He is like a clown,” she said. “Nobody has real concerns or fears about him becoming president. At least not in my social circle.”

‘The easiest way is hate’

Like many Mexicans, Trump wasn’t on Ali Gua Gua’s radar. “We only know he had, like, some hotels and had a lot of money,” she explained while seated in the middle of a protest encampment full of striking teachers in the heart of Mexico City, where she lives. Gua Gua — a globetrotting musician prominent in the Latin American punk scene — is perhaps best known as part of the Kumbia Queers, an all-female outfit whose members hail from Mexico and Argentina. She views Trump’s popularity in America as a byproduct of a strong strain of cultural intolerance in the country.

“I think in the United States, [people are] more aggressive when you’re different,” she observed. “And I think Trump is representing these people who think all the problems are because of immigration.”

But she also realizes that the U.S. economy sucks for a lot of people. “I think United States citizens are very scared about the economy,” she said.

Although she thinks Trump will ultimately lose the election, Gua Gua admitted that it’s still frightening that his ideas carried him to the nomination. “The easiest way is hate,” she said.

And she also wanted to share a warning for Trump supporters in America: White people will soon be outnumbered.

She dismissed Trump’s claim that the Mexican government uses the United States as a “release valve” for its own domestic poverty. Instead, she said, common people are often faced with an impossible situation. “If you’re a young guy in a small town in the middle of Mexico, you have, like, two choices or three: You’re a peasant, and you starve [to] death, or you become a policeman, [or you traffic drugs], or you go to the states.”

And a majority decline crossing the border, because it is expensive and fraught with danger.

Amazingly, she keeps a sense of humor about Trump. During our chat, she joked about how metal bands might find him the perfect target for their derision if elected. And she likened his candidacy to dystopian farce with a musical twist: “For me, it’s like a comic, no? It’s like Jello Biafra’s worst nightmare.”