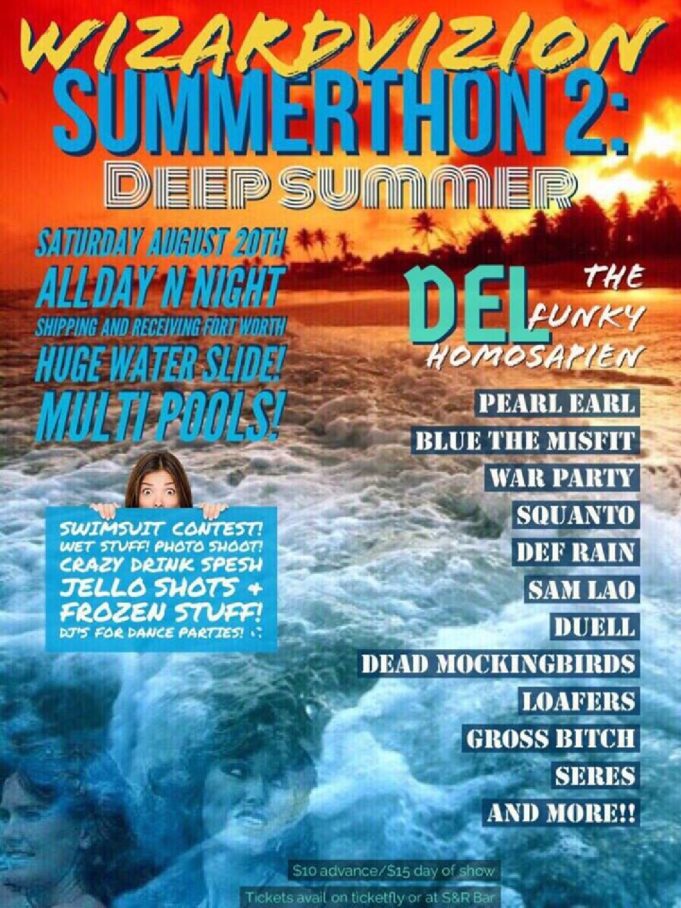 1) Austin by way of East Texas pop rock band Purple headlines a show at Lola’s Saloon on Thursday night, starting at 8:30 with local garage punks Vegan Shark, who are followed by indie rockers Picnic Lightning, and the spacey funk of Vodeo. Purple always puts on a great show (I feel like drummer/frontwoman Hannah is a minor celebrity around here), and the lead-up to them is high-energy across the board. Here’s an official Purple video for “Minivan”:

2) Man, it’s great to see an outfit like Dreamy Life always have something going on, whether it’s pop-up shops at bars (Republic Street, and Saturday at Shipping and Receiving during SUMMERTHON 2), DJ nights (see above), or cool bills at off-the-radar bars. Per that last activity, Dreamy Life is putting on a free show at 515 Bar (515 Jennings, where last month’s Solidarity Fest took place)  Friday night, starring Nathan Brown (aerobics music), VVOES (anxiety-dream pop), and Squanto (a soundtrack for robots on uncomfortable drugs). Show is free. This video is not of the Nathan Brown mentioned above, but it is of a Nathan Brown, so partial credit:

3) TEAM TO BEAT SHOW OF THE WEEK ALERT: on Saturday, Shipping and Receiving, Wizardvizion, and some alcohol sponsors are bringing you SUMMERTHON 2: DEEP SUMMER, the sequel to last year’s tacky concert party celebrating summery things like swimsuits, tanlines, sunburns, day-drinking, and getting gross in above-ground pools. This year’s concert features more pools, a large inflatable slide, Wizardvizion-branded sunscreen, and of course, live music: ten area bands, four DJs, and one well-known rapper, Del the Funky Homosapien. You know him, right? The dude who does the rap verses in Gorillaz songs, who also has an entire separate career that’s even more scintillating? Well, he goes on at midnight; before him, starting at 2pm are: Dead Mockingbirds, Loafers, Squanto, Gross Bitch, Duell, Sam Lao, Def Rain, War Party, Blue the Misfit, and Pearl Earl. If you’re unfamiliar with some of these names, the whole bill is a mixtape of rock, rap, and whatever you call the glitchy electronic stuff Squanto and Def Rain make happen. All in all, it’s a good soundtrack for getting drunk on the last weekend before school starts, for the low-low price of $15, or the even lower-low price of $10 if you buy tickets pre-sale. Speedos, burkinis, cut off jorts, bikinis, pickle-barrels-with-shoulder-straps, and/or whatever you wear to the pool if you come from another century (let’s see some swimwear from the Golden Age of Pirates!) are welcome, and if it rains, you’ll already be dressed to get wet. Show is strictly 21+. Check out what a short and soothing video this animated SUMMERTHON 2 flyer makes:

SUMMERTHON IS SATURDAY, AND IT COMES WITH EVERYTHING YOU SEE HERE! TICKETS ARE ONLY $10 IF YOU BUY THEM AT THE LINK IN THE PROFILE!

4) Up to Eleven is putting on a heavy/hard rock show at the Grotto on Saturday night: southern sludge metal band Dead Hawke headline, with psychedelic post-rock outfit Bathylite in the middle spot and stoner rockers Space Ape opening the show. High volume music for high, high volume music fans. This is Dead Hawke at Lola’s from 2014:

5) Aaaaand one more for Saturday: Whiskey Folk Ramblers are the main event at the Granada Theater in Dallas, and while the venerable folk-punks are always a great time, I would also recommend openers Parallel Play, who will be playing their farewell show. I’ve never been that interested in bluegrass, but Parallel Play rip through the genre’s conventions like a metal band that took up folk instruments just to prove that they could. Highly enjoyable, in other words. Dallas folk-rockers Loyal Sally start the night off. Show starts at 8pm. If you’ve never seen Parallel Play, here’s what you’ve been missing all this time: