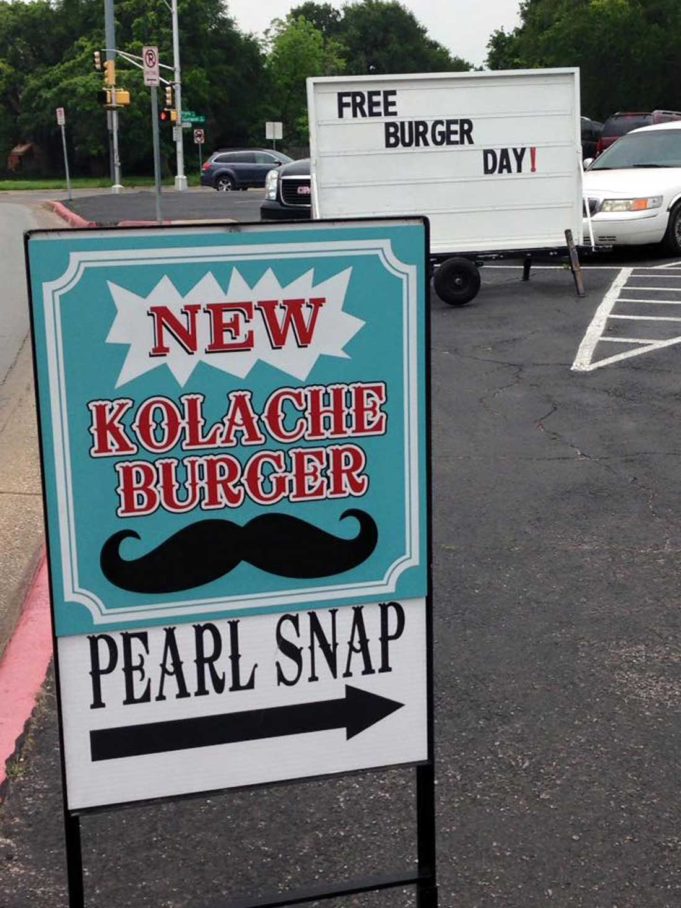 My grandparents will eat at only one restaurant. Whether it’s a special occasion or just an early evening repast, the two nonagenarians prefer the comforting mediocrity of Furr’s Cafeteria. When I was younger, the list of grandparent-approved eateries also included the Catfish & Company on White Settlement Road. So when they gave me the choice between the two, it was a no-brainer. I’d take fried catfish over soggy loafs of meat any day –– despite the lure of soft-serve ice cream for dessert at Furr’s.

After the Catfishery shuttered many years ago, the vastly underrated Tres Jose’s Tex-Mex Kitchen took over the space. Now, the modest strip mall that looks like a barrier between the ritzy Rivercrest-area homes and a bend in White Settlement Road is split between a dentist’s office and Pearl Snap Kolaches (4006 White Settlement Rd, 817-233-8899), the latter of which has been around about a couple of years but that until recently was never graced by moi. Spoiler alert: I enjoyed it so much, I went twice on the same day.

When I dropped by the space a few days ago, it felt a little like returning to the house I grew up in –– or in my case, grew out in.

The place has a funky coffee-house vibe, with beanbag seating, big leather couches, tables with brightly colored tablecloths, a chalkboard wall, mismatched décor on bright orange walls, and a small stage for live music. On my late morning visit, the deli counter was a little depleted, but I still managed to make a pig of myself. I ordered one of each of the remaining kolaches: apple cinnamon, cream cheese, and apricot ($2.50 each), and a cup of terrific joe ($2) that was both better and cheaper than a certain pervasive corporate chain.

Pearl Snap’s kolaches conform to traditional Czech standards –– a generous glob of some kind of filling surrounded on all sides by house-baked pastry, though Pearl Snap’s version is a little on the sweet side. All three of the flavors I sampled that morning were fresh tasting, sweet but not at all cloying, and served warm.

The meat-filled kolaches, technically called klobasneks ($2.50 each), for you Czech purists, came in pulled pork, sausage, sausage and cheese, and sausage, cheese, and jalapeño. The star of the meats was undoubtedly the lusciously tender pulled pork, though the spicy sausage and cheese enveloped in a glistening sweet dough pastry is also a must-try.

I went back for lunch on the same day to try the Kolache burger ($8), a juicy double-meat gut rocket slathered in Cheddar cheese with optional grilled onions, bacon, and jalapeños for no extra cost. (That’s right, you bacon-worshiping hipsters. This place is giving away bacon. Kneel to your gods.) The bun was the same freshly baked house sweet bread. This sandwich seemed a little overly simple, and it definitely could have used some tomatoes, pickles, and/or lettuce, but the no-nonsense meatgasm will have you crawling back to your car.

Pearl Snap is the kind of place you root for. There’s nothing corporate or contrived about it, and everything is fresh, tasty, and reasonably priced –– especially considering the price of real estate in the area. Now, if I could just get them to offer soft serve, maybe I could convince my grandparents to stop by.