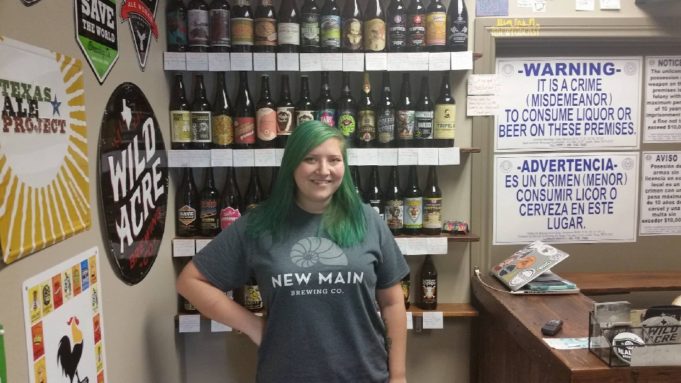 Hosted by the Fort Worth Weekly Oct 17-21, Fort Worth Cocktail Week is a celebration of our city’s booming craft cocktail scene. Participating restaurants and bars will create unique drink menus that emphasize premium ingredients, cutting-edge techniques, and creative flavor blends. The libations will be sold at a discount, and a portion of the proceeds will be donated to a local charity. Each night features educational events as well.

Besides outlets like, say, beer blogs, word of mouth can be the best marketing tool for craft beer bottle shops and the like. That’s especially true in the Near Southside, which is known for its tight-knit community of businesses.

When The Sleepy Panther bottle shop opened last February, its proprietor/manager Cristall Heisch knew she had picked the right locale. Her store cohabits a large building on the northeast corner of Magnolia Avenue and 5th Avenue along with several other businesses. Her space may well be the smallest (just a couple hundred-square-feet), but there’s room for what matters: two large refrigerators full of cans and bottles of craft beer and several large shelves of bombers.

Heisch moved to Fort Worth several years ago after graduating from UNT. Her then-boyfriend and current husband Austin Heisch had accepted a job in the area. Cristall caught the homebrewing bug a few years earlier and the couple began volunteering at Rahr & Sons Brewing Company to stay connected with the craft beer community.

“I did mapping for a military industrial complex,” at the time, she recalled. “I loved beer as a hobby. I didn’t think I could turn it into a job.”

A series of opportunities and breaks over the next few years would change that realty, though. In 2014, she was hired by Firestone Walker Brewing Company to organize off-premise tasting events for much of North Texas. Her next position was with Andrews Distributing Company where she held the title Mid-Cities account manager and learned the ropes of organizing on-premise pint nights and events.

Her current day-to-day life is a far cry from those years. She’s putting down roots in her adopted home. Each week, she greets familiar faces as a growing number of regulars return to stock up for the weekend or just grab a can of brew in between stops. Many locals still aren’t aware of Fort Worth’s lax open container laws. For those in the know, the bottle stop offers the possibility of a stroll down idyllic Magnolia Avenue with the welcome company of a frosty can of craft suds in hand.

When Cristall is off work or researching which beers to order, her step-brother Robert Davis fills in. One day, she’d like to expand into a larger space while staying in the Near Southside. Like Cristall’s personality, her business mantra is straightforward and sincere.

“My vision was to get really great beer to people who want really great beer,” she said. “I love the craft beer culture and the communal feel it creates. I want people to be able to grab a bottle, take it to their front porch, and enjoy it.”

This Saturday’s BeerFeast promises to be as explosively popular as it has been in past years with more than 120 rare American and imported craft beers available outside, an 80-tap takeover inside, and a variety of bottled and canned beers on the patio. There are some important updates, though. This year’s event is VIP only, which means you need to buy your tickets soon. Extra perks include food catered by chef Scott Curtis from Bird Café, expanded hours (noon to 6pm), and live music throughout the day.

From the Chamber Music Society: The Chamber Music Society of Fort Worth believes that classical music has a home wherever great music and appreciative audiences converge. For one night this fall, that home will be Wild Acre Brewing Company. The evening concert will be a fun, community-minded experience that will please lovers of great music and craft beer. The 30-minute program will feature popular classical music favorites as well as arrangements of popular songs. The event will be emceed by CMSFW artistic director Gary Levinson and conclude with a post concert “Schmooze and Brews” where you can mingle, meet the artists, and enjoy complimentary Wild Acre Brewing Company suds. A food truck (not complimentary) will be on site as well. Bring a date or grab your friends. This unique concert is one night only.