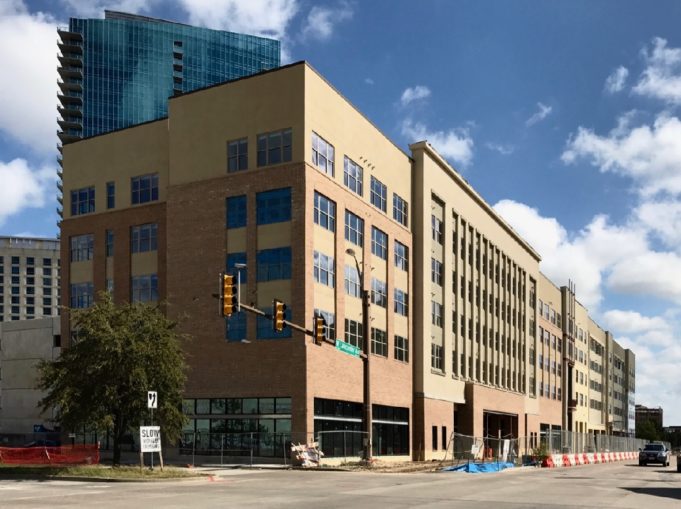 Part of the appeal of removing the old I-30 overhead freeway from Lancaster Avenue downtown (apart from getting rid of a hideous relic of failed post-war auto-centric city planning that was strangling the entire south end of the city’s core) was narrowing Lancaster to a more humane size and taking all that excess right-of-way back for new development. With the grand architectural trio of the T&P railway terminal, the historic U.S. Post Office, and the T&P warehouse holding down Lancaster’s south side, the north side could once again be host to walkable urban buildings with new shops, offices, and residences to give this end of downtown some life and energy.

It’s been slow going, but the first such development project has been underway for some time now, and is getting closer to completion. That project is Pinnacle Place, a mixed-use development stretching along the block bounded on the west by Jennings Avenue and on the east by Throckmorton Street. Pinnacle Place, named for its primary ground-floor tenant, Pinnacle Bank, is a five-story development with ground-floor retail and four floors of apartments above.

When I last looked at Pinnacle Place, it was still mostly bare wood framing atop a concrete podium. Since then, the project has come a long way, with a large amount of the exterior facade now in place. We’re able to get a better idea of how Pinnacle Place will look when complete, and how it will integrate into the urban fabric of Lancaster Avenue.

Unlike most of the recent infill apartment buildings that have been going up around urban Fort Worth, which seek to disguise their true self – that of huge, monolithic boxes surrounding a central parking structure – by covering their facades with a constantly shifting mixture of materials, textures, colors, and architectural features, dividing themselves into a jumble of boxes every thirty feet, Pinnacle Place seems downright serene by comparison. The building is a calm assortment of buff brick and tan stucco, arranged into forms that seem to broadly suggest the massing of some of the nearby historic buildings like the Post Office and the T&P terminal. The design feels more calm than most of the other recent apartment developments, and as a result, fits into Lancaster without drawing attention away from the three landmark buildings across the street.

It’s a great example of the value of “background buildings.” Not every structure needs to cry out for your attention. Sometimes, it’s more important to simply be a good, solid building – one that engages the street and welcomes the pedestrian without trying to make a huge statement or scream “look at me!” with its exterior design. This can be especially valuable when a location already has notable, important landmark buildings, and there are few places in Fort Worth where this is truer than Lancaster Avenue.

It remains to be seen how future development on Lancaster will work alongside the historic buildings of the street’s south side, but Pinnacle Place shows the value in deferring to the greatness that came before. Not that there wouldn’t be value in a modern landmark along the street, but not every building must be such a thing (and it’s typically more meaningful for those grand landmarks to be buildings of major civic importance). Building a solid, welcoming urban fabric should be job #1 for a street that has been so heavily damaged for so long.