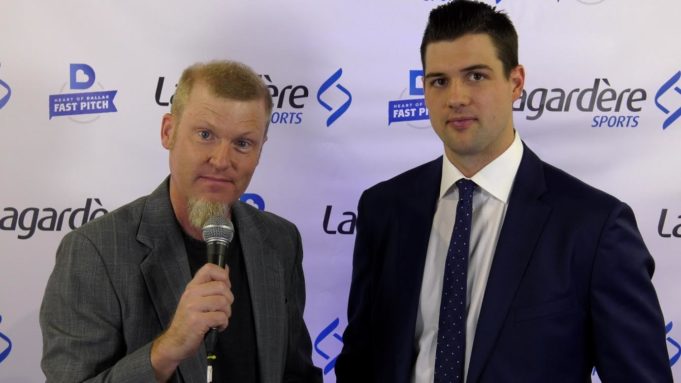 During the season, professional athletes have lots of demands on their time. So for the captain of one of the local sports teams to attend an event that wasn’t even an official team function in the middle of a homestand indicates that he must have a deep-seated interest in it. Last Wednesday, Stars forward Jamie Benn appeared at the Lagardère Sports presents the Heart of Dallas Fast Pitch Event. He received the group’s Community Excellence Award, and also collected monies set to go to a charity he cares about.

Find out what that cause is and more about the event in my video interview with Jamie Benn.

A little more insight into the character of the guy who wears the C – he wore a suit, you’ll notice. He could have donned anything he wanted and gotten away with it, but he followed the dress code. He was extremely gracious the whole evening, took photos with all the sponsors and committee members, and earnestly answered host Julie Dobbs’ questions on stage. You can look for excerpts from their chat on this coming week’s Stars Insider show on Fox Sports Southwest.

The Fast Pitch event, held this year at LIFE in Deep Ellum, has its roots in the group that puts on the Zaxby’s Heart of Dallas Bowl, held each December in the Cotton Bowl. It awards game-related charitable funds through this annual Shark Tank-style event. Charities tell some amazing stories about the good work they do. More than one tale was moving enough to bring tears from some of the attendees and the judges’ decisions on who should get which sums was not an easy one.

Disclosure : I worked for the company that helped put on the Fast Pitch event performing video and run-of-show functions.