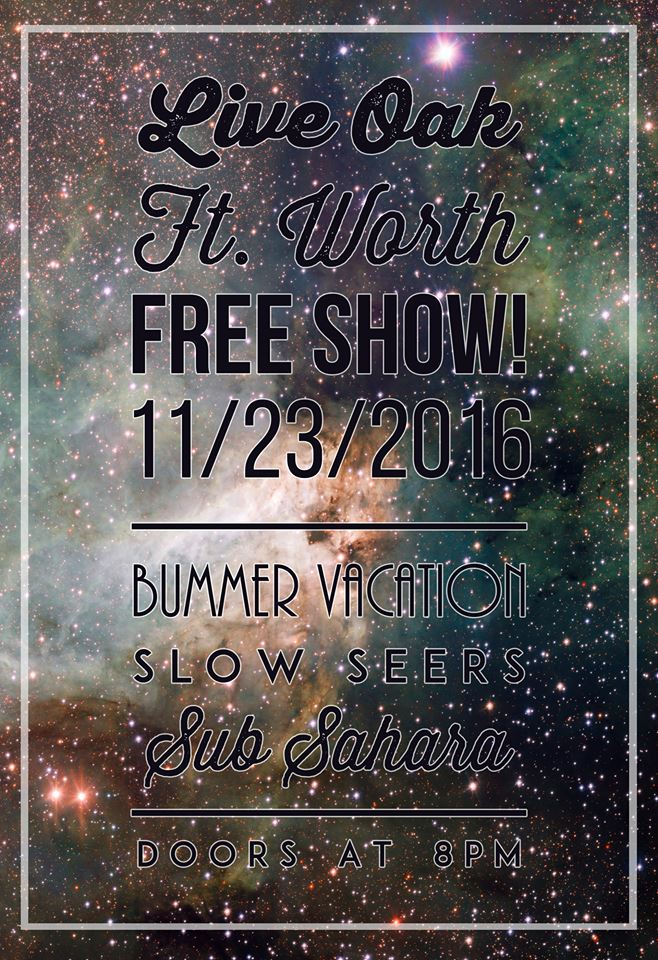 2) Since you’re probably gonna just go to regular bars on Thursday, here’s another one for Wednesday: Bummer Vacation with the Slow Seers and Sub-Sahara at the Live Oak. It’s free, and Lone Star drafts are 50-cents. BV hasn’t played in Fort Worth in a good while; you miss seeing that band, right? I certainly do, and while some of the current local slackergaze/janglecore/wave runner-wave bands popping up around here (Movie the Band, per usual these days, comes immediately to mind) are probably unrelated to Bummer Vacation, I hear a common aesthetic among them all, and it’s spelled F-E-N-D-E-R G-U-I-T-A-R-S. One time long ago, a local band elder hero dude described a time during his youth when people quit buying Strats because everyone wanted a Kramer or Hamer or Jackson or whatever other pieces of hair metal guitarbage were popular in the ’80s, everyone except this friend of his, who bought a new Strat every year for a decade or something. Extrapolating from that, I’d argue that if you are into buying up guitars, the price of Gibsons and other axes that produce naturally darker tones should theoretically go down somewhat since the kids making music these days are wild for Jaguars and chorus pedals. What I’m also trying to say is that if you go to this show, you’ll probably see a lot of Fender products. Maybe it’s because these bands all formed toward the end of the Obama administration? If that’s the case, I feel like Donald Trump’s America might usher in a revival of bands who favor Les Pauls over Strats. Is there an economist who studies this stuff? If so, please direct him or her my way.

3) Wow, that’s some Inside Baseball type of shit up above, huh? Speaking of Movie the Band, they are also playing Wednesday night, and their show is conveniently near the Live Oak, across Lipscomb at the Boiled Owl Tavern. Joining the reverby, effects pedal-happy MTB are Yaz Mean and Blacksmiths. I know nothing about the openers, though Yaz Mean apparently includes a member of new-defunct psych-doom band Space Beach. As for Blacksmiths, if you search for “blacksmiths band” on Facebook, the first result is a thrash metal cover band from Italy. So maybe Blacksmiths is a thrash band? I’ll find out Wednesday, but also, if you know how to play a bunch of Megadeth songs, perhaps you should move to Italy and start a band – as it happens, the Italian Blacksmiths haven’t posted anything in five years, so it sounds like there’s money to be made! Speaking of money, this show is also free, though feel free to tip the bands.

4) Here’s a two-for Friday: go to Lola’s Saloon for Soundclash 2016, the annual reggae-centric party starring long-running reggae tribute act Pablo and the Hemphill 7. I think this is either the 12th or 13th year they’ve been doing this thing, and like many previous lineups, Darth Vato (full disclosure: this was my first band, and I am still in it) is also on the bill. Deep Ellum-based, West Coast-reggae-influenced Bum Lucky opens the show.

If you go to this show, you can also easily amble over to the Grotto to catch the release of Inhaler, which I understand to be the last record made by the Longshots. The self-described “junk rock” band dissolved last year, but the band members felt the album deserved to see the light of day all the same. The Longshots’ former frontman Joey Gorman’s current project, Joe Gorgeous, headlines his old band’s record release show, and War Party and Squanto are in the opening spots. Between this paragraph and the previous one, there are interesting subtexts about the passage of time and how you spend it, but I’ll save us all the trouble and skip to this conclusion: the local bands who were your favorites when you were younger probably won’t be around forever. But sometimes they do. Never miss an opportunity to see your favorite bands, I guess!

5) Doom worshipping stoner rock band Vorvon returns from their deep-space hibernation on Saturday night, reentering the material plane at full strength through the Grotto’s onstage dimensional portal, probably in a haze of fog. Full-strength means the band once again features two bass players, including original lead bassist Will Wells, as well as Cory Wells (no relation), who also provides thunder for headliners Caliche Burnout. The Dangits play in the middle. You’ll get a good tinnitus workout at this show!