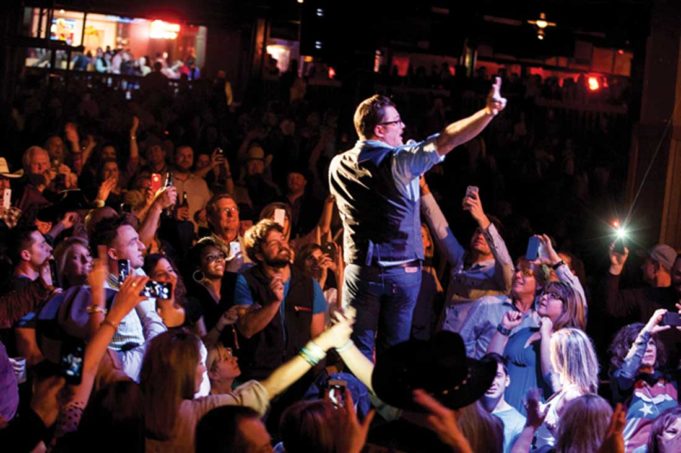 Josh Weathers is a good cat. Anyone who’s spent even 30 seconds with him knows that he also would have played an Obama inaugural ball or one of Hillary’s. He never would have been asked, of course. He’s not Bruce Springsteen, U2, Stevie Wonder, or some other megastar, but having known Weathers for a few years now, I can say he would have just as easily done his powerful, smooth soul and R&B thing for a Democratic president. Or even a Green Party one.

And there’s the rub. Back in November, I bet a lot of us were scratching our heads wondering why all of these otherwise sane, otherwise nice, otherwise smart people in our lives –– including perhaps some loved ones –– voted for an avowed racist, a sexual predator, known philanderer, borderline pedophile, notorious skinflint, and a serial liar for president of the greatest country on Earth. And how do we separate the two? The sane, nice, smart person we know from the person who threw his support behind that orange stain on humanity?

As Uncle Walt once wrote, “Do I contradict myself? / Very well then I contradict myself; / (I am large, I contain multitudes.)” Or as The Theater Fire put it in an album title: Everybody Has a Dark Side. Trump has several, and most of them are public. And not all legal. Josh Weathers, however, is one of us. There’s no doubt that multitudes are within him. The same Fort Worth homeboy who played guitar and sang (beautifully) while Donald slow danced with his hostage, um, I mean, his “wife,” is the same person who with wife Kady started a faith-based mission not too long ago to change “the treatment of young girls and women in India who as young as 5 years old are cast into sex and slave trafficking.” Though new, Love Like You Mean It already has shoed more than 150 kids and clothed 120 in new school uniforms.

Most of us are full of contradictions, and since we live in the West, our hands are covered in blood, whether we acknowledge that fact or not. There’s no escaping it. We wear clothing made in overseas sweatshops where female workers are forced to take birth control and submit to routine pregnancy tests to keep from missing a single shift and where children work side-by-side with adults. We eat beef processed at sites that pollute the environment and munch on corn products that have been farmed with the chemical fertilizers that have created the massive dead zone in the Gulf of Mexico. We say we support female empowerment, but we consume pornography or buy products marketed with T and A. The only sensible option we have (other than maybe unplugging completely and moving to a hut in Polynesia) is to fight one or a couple of battles at a time. Josh Weathers clearly chooses to sit out political confrontations, but in the trenches of sex slavery and child trafficking he is a four-star general. Much in the same way our good doesn’t wipe out any of our bad, our bad can’t be said to wipe out all of our good.

The person I most respect outside of my wife and mom is my father-in-law, a retired fighter pilot and U.S. Air Force colonel who flew nighttime combat missions in Vietnam, among other things. Though he frowns on Trump’s “warts” –– this, my father-in-law told me in a text on November 9, after I, in haze of befuddlement, had asked him about his motivations for casting his ballot the way he did –– he voted for The Donald mostly for economic and security reasons: destroying ISIL, rebuilding the middle class, not telling high wage earners where their hard-earned money should go. You know. Boilerplate Republican stuff. Immediately, I thought of Bill Clinton and all of the sticky situations he got himself into while in office. How was I able to “compartmentalize” Clinton’s statesmanship and his sexually predatory conduct? I simply said the good outweighed the bad. And that’s apparently what many Trump voters said about him, a politician, I am obligated to remind you, who was endorsed by leaders of the Ku Klux Klan, a businessman whose companies have been cited 24 times since 2005 for failing to pay workers overtime or minimum wage, a landlord who once offered apartments to homeless people to drive away his rent-controlled tenants, a reality TV show boss who once called a deaf contestant “retarded,” a father and husband who said he likes to “grab” women “by the pussy,” who forcibly kissed Miss Utah on the lips in 1997 and told her, “Twenty-one is too old,” who also told two 14-year-old girls that he would date them “in a couple of years,” who told a 10-year-old girl that he would date her in 10 years, and who told shock jock Howard Stern that it was OK for people to refer to lovely daughter Ivanka Trump as a “piece of ass,” a fellow human being who was sued twice by the Justice Department in the 1970s for allegedly refusing to rent apartments to black tenants, a hotelier whose eponymous Plaza was fined $200,000 in 1992 by the New Jersey Casino Control Commission for removing African American dealers from card tables and who told a former casino employee that he hated “black guys” counting his “money,” an upstanding Joe who has been accused of stiffing “a painter and a dishwasher in Florida, a glass company in New Jersey, dozens of hourly hospitality workers, and some of the lawyers who represented him,” all according to Harper’s, after a review of the more than 3,500 lawsuits filed against him. Yeah, that guy.

We all contain multitudes. Except him. He’s as one-dimensional as a three-letter bumper sticker.

While I would seriously begrudge Weathers for contributing to Donald’s campaign or even voting for him, I can’t fault a working musician and budding humanitarian for practicing his art not for Donald Trump qua Donald Trump but for the office of the United States presidency. There’s a difference. A huuuge one. This president is a boorish ogre. The presidency contains multitudes.