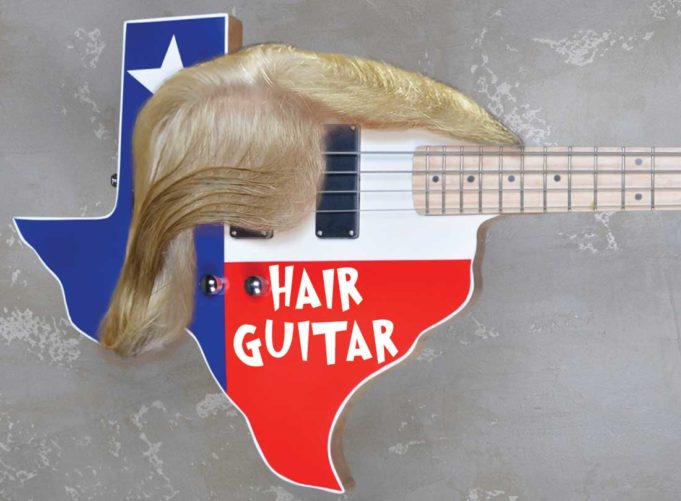 Don’t be fooled. It can’t be real.

A couple of weeks ago, an ad appeared on Dallas’ Craigslist seeking “conservative musicians” for a “new tour,” ominously titled Rock for Trump.

“Reach out to us,” the plea goes on, “as we have a nice pool of musicians and may be able to package you with some like-minded musicians (simply tell us what you play and your influences).”

Remember just a couple of weeks ago, when just about every popular artist on the face of the planet – except for a Fort Worth guy, Josh Weathers – declined an invitation to play for the new Republican president? Other than Toby Keith, Ted Nugent, and Skrewdriver, who in his or her right mind wants to celebrate a proven racist/sexist/bigot? Who isn’t even good at business, the thing at which he claims to be the best, the best ever, the best you’ve ever seen?

The one thing this Craigslist guy has going for him is geography – being Texas, Fort Worth-Dallas specifically, we’re lousy with C&W hacks, most conservative politically by musical disposition – and by race. One local C&W singer-songwriter who probably jumped at the chance to Rock for Trump is Will Hobbs. A couple of weeks ago, Hobbs threatened to kick the entire collective ass of the Fort Worth music scene based on an intentionally, patently middle-of-the-road cover story we wrote about Weathers’ performance at the inauguration (“Everyone Hates Josh?” Jan 25), a piece of a few thousand words that not many people read closely, evidently, but that too many people felt entitled to comment on. Wildly.

I admit. A former college football player whose hell-raising days are behind him but not completely out of sight, I’m a bit of a meathead myself. In a weird way – and I can’t believe I’m admitting to this – I felt a sting of admiration for Hobbs’ willingness to say he wants to give a bunch of people a “fist full of knuckles” and leave them “bloody and bruised.” But I remembered a lovely meme I saw a couple of weeks ago: “We hate Trump the way you hated Obama. The difference is we hate Trump because he’s racist. You hated Obama because you’re racist.”

Is it ever OK to punch a Nazi in the face? No. It’s never OK to punch anyone out of anger – unless – unless you or your family are being threatened. Then it’s not only OK but incumbent upon you to knock his skinhead ass the fuck out. “It was self-defense, officer. I swear.”

Does threatening people with violence seem very Christlike to you? Is it even worth asking anymore where Jesus can be found in the words and actions of a political party whose members and leaders espouse hatred and division and who care only about keeping their pockets well-lined? Well-lined most often at the expense of the poor and the working class?

Other than Hobbs and maybe some other country bumpkins, the only other acts I can see playing anything remotely associated with the Republican president are hair-metalheads, another genre ruled by angry white men, a.k.a. Trumpsters.

What are they angry about? I’m not quite sure. Is it because their jobs are being taken by immigrants? Unless Angry White Man works in construction, agriculture, or the food industry, he shouldn’t be too worried about that. Is AWM worried his job is being outsourced? Oh, then by all means, he should be mad at the poor people coming into our country to do the jobs he thinks he’s too good for instead of raging against his fat-cat boss and the Republican politicians he buys and sells. Makes perfect sense. #we’redoomed