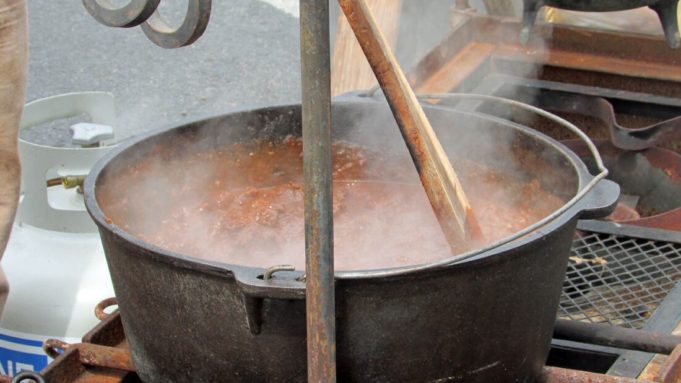 At this point, I think we can agree that winter is not coming. Instead, the more than 400 folks at the Fort Worth Weekly’s Second Annual Celebrity Chef Chili Cook-Off braved the beginning of Southern monsoon season Sunday at Shipping & Receiving. Luckily, great bowls of red and a metric ton of brewskis washed away cares about the rain. All the chefs’ tasting stations added up to around two pounds of chili per guest, in case anyone was wondering why he felt like a forklift might be required to ship himself back home.

Defending champion Juan Rodriguez (Magdalena’s) could only sit back and watch as the winning trophy was handed to Jordan Rogers of Reservoir/Whiskey Garden. As a ballot counter, the vote I enjoyed the most was for Del Frisco’s, even though they weren’t present. I suspect this same person also wrote in Jimmy Carter for the 2016 Presidential election.

I personally should gift David Hollister of Gas Monkey Bar & Grill a trophy topped with a golden sculpture of my contorted face for Best Tomato-Based Murder Plot. I tried his chili made with the 7 Pot Douglah chile, the second hottest pepper in the world and the first to send me clawing the bar waiting for a shot of a cream-based hellmouth fixer. The flavor was there, but I couldn’t find it around the anaphylactic shock. Suck it, estheticians city-wide. This stuff made me sweat so much, my pores look like I just spent the weekend getting spa steam-cleaned.

When I wasn’t going through an extreme food cleanse, I was sipping on some of Shipping & Receiving’s concoctions using Ballast Point’s Spicy Bloody Mary Mix. As pre-made options go, this one always lands in my Central Market shopping cart. I know practically every bar in the continental United States uses Zing Zang, but that takes too much after-market doctoring. Ballast Point’s version is damn tasty straight out of the bottle. I know, because I’m one of those weirdos that downs Bloody Mary mix without alcohol at breakfast. “Why don’t you just have a V8?” I hear you say, to which I reply, “If I wanted eight servings of fruits and vegetables pureed, I’d actually use that damn juicer I bought after watching fasting documentaries on Netflix.”

Luckily, the only fasting at Shipping & Receiving was how quick they slung these drinks into my hand. This staff knows how to manage large crowds. One of the bartenders passed out frozen Jack and Coke samples, thus negating anyone being remotely annoyed with a line.

When the weather is cooperating, the patio and stage area holds a mass of humanity without forcing you to rub up against complete strangers in a quasi-sexual manner. Much like R. Kelly, I “don’t see nothing wrong with a little bump and grind.” But considering the heavy garlic and cumin smells abounding, more space, a light breeze, and drizzle were preferable.

The sound setup at Shipping & Receiving is also spot-on. Don’t get me wrong. I enjoy screaming at jerks in public as much as the next chick. I just don’t like it when I’m barking at my own friends a foot away. The last event I went to at a different local live music venue was painfully loud, which, thankfully, is not the case here. Honestly, if I’m going to have my face melted off like I’d stared at the Ark of the Covenant in Indiana Jones, then I’d rather it be from spicy chili than a sonic boom.