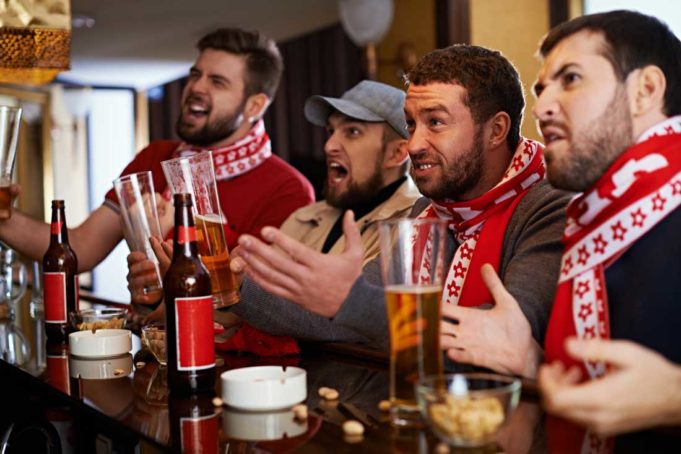 The wide world of sports is festooned with fighting talk. Nowhere is this more prevalent than in coverage of English Premier League soccer. You can feast on a blood-red lexicon of “wars of attrition,” “campaigns,” “battles,” “foes,” “legions,” and “armies.”

Game Day in England means meeting friends at your local pub. As you approach, its windows are opaque with condensation at the meeting of the cold, damp exterior and the seething human tide inside. Upon entering, the dark wood furniture, floor, and the bar counter itself sport human drapes of local colors.

The atmosphere is mostly a cocktail of alcohol-fueled anticipation and fear of failure. This heady brew can be soured when any ill-advised opposition supporters make the mistake of coming to the wrong bar. They will be fine so long as they keep their mouths shut. Having grown up in England, I’ve seen some combat-grade bar fights.

It was with a frisson of excitement-cum-trepidation that I approached my first Fort Worth in-pub soccer experience a couple years back. I need not have worried. In Cowtown, fighting talk has been eschewed for free nachos and light-hearted banter bordering on new BFF-ness.

Upper 90 on West Magnolia Avenue is a Cimmerian sports chamber punctuated only by the exclamation points of multiple TVs that pretty much show all soccer all the time.

Long-serving barman Tomas T. Moore said most of the game day crowds are regulars. And when London’s Tottenham Hotspur are on the pitch, the team’s supporters take over the place – and in some cases empty the taps of their nectar.

“The Spurs supporters club,” he said, “is full of a loyal bunch that live in the neighborhood and a few expats who love to tell stories that make for some hilarious banter.”

One of the club’s supporters “drank all of our Guinness during the season opener last year,” Moore continued. “The man was still coherent and in a sound state of mind. That was impressive.”

The bar offers game-day drink specials if you want to get your buzz on as the cock crows. (For those of you scoring this column on puns, a Hotspur is a type of cockerel) Domestic beers are $2.75 and mimosas and Bloody Marys $3.

Another Magnolia soccer haunt, Chimera Brewing Company, faces off with Upper 90. As a fully fledged Chelsea club bar, Chimera is open for every Blues’ game, even as early as 4am. You won’t get beer at this hour, but strong black coffee is available to all.

The bar is as urbane and self-confident as its Italian ownership and allegiance would suggest. (Chelsea’s sporting renaissance came through a slew of high-quality Italian imports funded by a Russian oligarch – way before they started buying elections.) On game days, you will find a devoted crowd of supporters variously chanting, drinking, and sitting nervously.

From Across the Pond is a British-themed bar in North Richland Hills owned by Lee Herdman, an ex-pro soccer player from London. There you’ll find all the Brit paraphernalia you’d expect adorning the walls and floors: Union Jack flags, London signs, and Doctor Who’s TARDIS. Though the bar welcomes fans of every club, the crowd’s allegiance lilts decidedly toward Arsenal.

Herdman said one of the stranger Arsenal-related superstitions has created some awkward situations. For example, fans have to stay where they are when the team scores.

“It’s led to me having to stay in the pub kitchen for whole halves of games,” he said. “One of our regulars ended up in the toilet for a whole game when we scored in the opening minute.”

From Across the Pond, 8000 Bedford]Euless Rd, North Richland Hills.