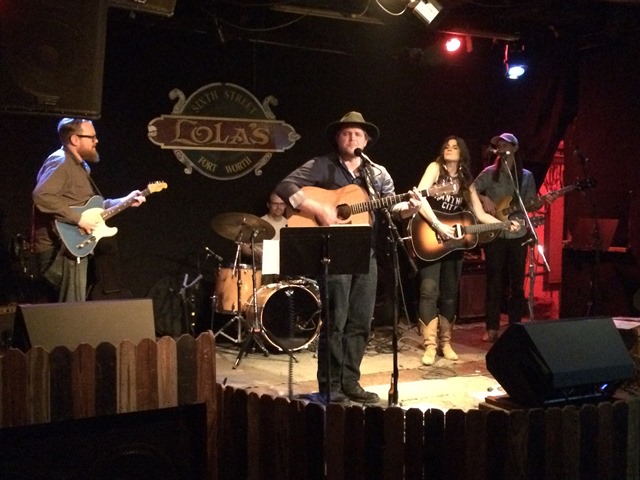 It was windy enough outside to blow any cowboy hat off the head of an unsuspecting customer, but inside Lola’s Saloon, it was all about the sweet nostalgia of the golden days of country music or as Summer Dean has jokingly referred to it, “PG Country” (Pre-Garth).

Featuring singer-songwriter Dean and L. Denison on vocals and acoustic, Andrew Skates (bassist/organist for Leon Bridges) on lead guitar, singer-songwriter Jake Paleschic on bass and vocals, and drummer Will Reynolds, the Honky Tonk Country Club typically goes through all the greats of the early days of country, all the way up to some ’70s and ’80s songs as well, from Waylon Jennings to Steve Earle, Roger Miller to even Dwight Yoakam. The ladies in the band handle the bulk of the lead vocal duties, and they sing harmonies together beautifully. It’s a truly awesome thing to hear Waylon’s “Warmore’s Blues” sung by a female, and Dean executes it hauntingly and beautifully. Denison handles most of the other lead vocals, and she navigated Freddy Fender’s classic “Wasted Days and Wasted Nights” with all the power that LeAnn Rimes did with her version of the song.

Paleschic has been a part of the local music scene for the past few years, having played bass in the garage-punkish Longshots before going to his next band, Patriot, which then morphed into his current project that performs under his own name. This night was the first time I’ve seen him sing with the band, and he delivered a great version of Roger Miller’s “Where Have All the Average People Gone” (complete with a pitch-perfect whistle solo). Paleschic also lent lead vocals to Steve Earle’s mid-’80s classic “Down the Road” with Dean and Denison making it a beautiful three-part harmony singalong.

Skates has been a mainstay on the local scene for years, having played with Telegraph Canyon and the Quaker City Night Hawks in addition to Leon Bridges. With Telegraph and the Night Hawks, he primarily handled keys and guitar, while with Bridges he’s been playing mostly bass guitar and organ. With the Honky Tonk Country Club, he really gets to let his country guitar pickin’ skills shine, as he takes at least one solo per song. You can tell he’s been itching to break out his scathing lead work.

The Country Club also involves a rotating cast of auxiliary musicians. Perhaps a fiddle player one night, a keys player the next, a steel guitar player the next, or a sit-in by one of the many local musicians who have come out to see the show. Tonight it was local singer-songwriter Joe Savage, who played a few of his original songs solo before joining the band to sing on Michael Martin Murphey’s “Fort Worth I Love You” from 1973. You just never know who’s going to get onstage next.

The Honky Tonk Country Club plays Thursday nights at Lola’s Saloon, and there’s no cover. It’s definitely worth seeing if you despise “bro country” and long for the old days. This band plays the classics with a lot of heart.

Matt Mabe is a local musician and frequent live-show spectator.