Duncan is recuperating at home. The 70-pound golden retriever/border collie mix lost multiple teeth, had his head shaved, received more than a dozen stitches in his face and ear, had several bullet fragments removed from his sinus cavity, and is walking around with a large cone on his head. He was shot on Sunday by Pedro Juarez, the husband of Pilar Candia, who’s running for Fort Worth school board.

I heard Duncan’s loud bark when I knocked on his owner’s door this morning. Once Alan Smith opened it, however, Duncan’s bark faded and was replaced by a wagging tail, dangling tongue, and friendly eyes. He and his sister, Missy, were both docile as I entered the house. I sat on a couch to talk to Smith, and Duncan and Missy both lay on the floor near my feet, gladly accepting any ear scratching or back rubbing that came their way. Smith said his dogs bark at passersby from inside the house and looking out the door or the window but are generally quiet when outside for potty breaks or playing with the neighbor kids in the front yard. He said he has not received any previous citations or complaints about his dogs being outside in his yard. He has lived in the house for more than 20 years and had the dogs for 11.

Smith was also friendly, although his anger became evident after he began recounting the shooting and its aftermath. He also questioned whether Candia pulled strings to make things easier for her husband by making a personal phone call to Police Chief Joel Fitzgerald while at the scene.

That Sunday, Candia, Juarez, and their two daughters, ages 6 and 9, were walking through Smith’s Eastside Fort Worth neighborhood, distributing fliers and knocking on doors. Candia serves as director for City Councilmember Sal Espino’s district but is challenging Ashley Paz for her seat on the Fort Worth school board. The election is Saturday.

Earlier this week, Juarez told a Weekly reporter that two large, black, unleashed dogs approached his family as they were walking on Meadowbrook Drive. The dogs were barking, aggressive, and charging at “full force,” Juarez said. He grabbed the handgun he was carrying and fired into the head of one of the dogs to protect his family, Juarez said.

Smith and his neighbors tell a different story.

Smith said he was visiting his next door neighbors, Kenny and LeAnn Rogers, in their backyard and barbecuing ribs. Missy was also in the backyard while Duncan was lying not far away on the side of the house in the driveway, Smith said.

They heard what sounded like a gunshot. Then the neighbor’s teenage son ran into the backyard saying that somebody had shot Duncan, who had also high-tailed it to the backyard, leaving a trail of blood the entire way. The neighbor’s son said the man with the pistol had stood in place for a second after firing once, still holding his pistol in a firing stance, before lowering the weapon and running toward an SUV parked a half block away.

The neighbor’s son said he heard no barking or yelling prior to the shooting. Smith and the neighbors, who were out of sight in the backyard, also said they heard no commotion prior to the gunshot.

Smith said he grabbed the wounded Duncan by the collar and led him to his car to rush him to a veterinarian. Smith said he noticed that Juarez had driven the SUV to the front of the house where the shooting had occurred and was standing outside the SUV. Juarez’ wife and daughters sat in the vehicle, Smith said.

“I said, ‘Are you the MFer that shot my dog?’ ” Smith said. “He said, ‘I am.’ Then I called him a MFer a couple more times, which I regret because it was in front of his children.”

Smith said he didn’t want to waste time arguing because Duncan was hurt. Days after the shooting, bloodstains remain on the sidewalk in front of the house and down the length of the driveway where Duncan ran.

After Smith left the scene, his neighbors approached Juarez to find out what had happened. They said Juarez said the dog attacked his daughters and so he shot him. Juarez told us the same thing on Monday in a phone conversation.

“I said, ‘That dog wasn’t going to attack nobody,’ ” Kenny said.

The dogs are known among the neighborhood kids as friendly types who like to get petted. Both dogs are overweight from a combination of being old and docile and from eating too many treats. Each dog probably carries an extra 20 pounds above their normal weight.

Kenny asked Juarez if he was carrying a permit. Juarez allegedly replied “no.” Neither Juarez nor Candia responded to repeated requests for interviews for this follow-up story.

Juarez was not ticketed or arrested.

Fort Worth police said Juarez did not present a gun permit at the scene.

“Since it was a misdemeanor offense that occurred out of view, a report was generated but no arrest was made on scene, which is standard,” said police spokesman Brad Perez.  “It will be up to the detective assigned this case as to whether any charges will be pursued.”

The offenses listed in the report were “unlicensed carrying of a weapon” and “miscellaneous,” which will most likely refer to the “discharging of a firearm” within the city limits, Perez said.

Smith also showed a copy of his vet bill, which exceeded $2,500.

Smith’s two neighbors said a police car cruised by shortly after the shooting, and Juarez honked his horn and waved them over. Two police officers got out of the car, with one walking to Juarez and the other approaching the neighbors, who were standing nearby, Kenny said.

However, before the cop reached them, the Rogers said, Candia hollered at him while getting out of the passenger seat of the SUV.

“She gets out of the car with a pink- or rose-looking phone, and her exact words were, ‘The chief wants to speak to you,’ ” Kenny said. “He got the phone, got inside his vehicle for three or four minutes talking on her phone, and then he goes back to her and gives her the phone. Then he comes over here.”

Kenny said he asked the officer whether Juarez would be arrested for firing a gun in a neighborhood while children were nearby. The police officer said he didn’t see anyone shoot a gun, so he couldn’t arrest anyone, Kenny said.

“I said, ‘The shell casing is right there, and the other officer has his gun,’ ” Kenny said.

The Rogers said they felt like the police officer was no longer interested in hearing what they had to say.

Police spokesperson Paula Fimbres said Candia texted the police chief, who called her back on her cellphone as officers were arriving on the scene.

“Pilar was extremely upset after the incident and texted Chief Fitzgerald,” Fimbres said in an email. “He called her back, and she was very upset that her family was nearly attacked by the loose, aggressive dog as she was canvassing the neighborhood. Chief Fitzgerald could not understand Pilar due to her being upset and possibly crying, so he asked her if she had already called the police. She told him yes, that officers were arriving on scene. Chief Fitzgerald asked Pilar to hand the phone to the officer, which she did. Chief Fitzgerald told the on-scene officer to complete the on-scene investigation and report, and to contact him back in the event they needed anything further from him. Chief Fitzgerald did not hear back from the officer nor Pilar.”

Smith said he was wrong to allow his dogs to be outside without a leash. They are older dogs that do not roam outside the yard other than going next door to play with the neighbors’ children and grandchildren, he said.

“I always thought that as long as my dogs were on my property it was cool,” Smith said. “Unfortunately, the city ordinance says they are required to be behind a 48-inch fence. I was in the wrong.”

Smith, however, doesn’t feel it’s fair that he received two citations for loose dogs — even though only one had approached Juarez — while Juarez was not arrested or cited. 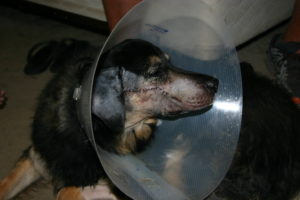