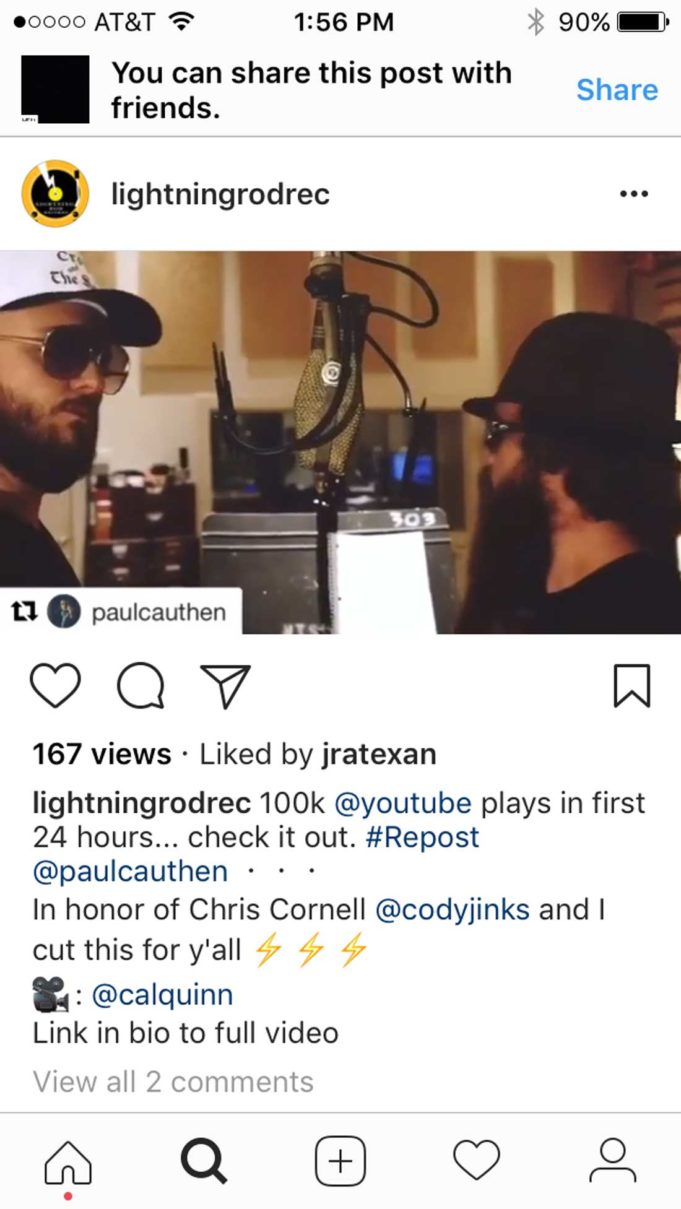 You know this already, but in the early hours of May 17, Soundgarden frontman Chris Cornell took his own life, making lots of people very sad, myself included. Like many others, I emoted on Facebook, capping it with a sad face emoji. A day later, my own face got teary because I put on Superunknown as I was getting ready to go out. I guess it took a day for his death to sink in.

It took less time, however, for a couple of local country artists to record their own tribute. Along with a tasteful piano accompaniment by Modern Electric Sound Recorders’ Beau Bedford, Fort Worth’s Cody Jinks and Dallas’ Paul Cauthen applied their respective baritones to a cover of “Black Hole Sun.”

Though the video and stills of the video (shot by sound guy-cum-band-photographer Cal Quinn) popped up on my Facebook and Instagram feeds over the next couple of days, I purposely avoided it, because I remember seeing how quick people were to organize tribute events when David Bowie died, and I didn’t want to feel nauseated. Grieve in your own ways, and call me a dick if you must, but I just felt like most of the effusive “I’ve been a fan since before I was born!” eulogies online were kinda tacky – couldn’t y’all just let the greats rest in peace, or at least let their bodies finish cooling, before you make their passings all about yourselves? Good thing everyone pretends to hate The Eagles, because otherwise I might have had my grief over Glenn Frey’s death tarnished by someone’s tacky bedroom video of himself playing the “The Heat is On.”

I finally caved, though, making myself watch Jinks’ and Cauthen’s tribute on Sunday after Cloudland Recording Studio’s Britt Robisheaux posted it on his Facebook page under the comment, “This may be the most tasteless shit I’ve ever seen.”

Most of the comments that followed were along the same lines, and I was initially inclined to agree, except I’ve talked to Cody Jinks before, and I know he cut his teeth in a metal band called Unchecked Aggression, so I am confident that he recorded the song out of respect for a dearly departed inspiration. And to be honest, the combo of Jinks’ voice and Bedford’s piano did do the song and the man who wrote it justice.

Unfortunately, Cauthen might not have been the right man to partner with. Nothing against his deep, theatrical, gospel-leaning voice by itself, but when rendered in video and combined with his overall look – aviator sunglasses, beard, ballcap, emphatic head bobbing, and odd phrasing mixed with glances at the lyrics on a music stand – I couldn’t help but agree with Robisheaux’s charge that the whole thing was reminiscent of an SNL sketch. From there, I pictured Horatio Sanz done up in Bocephus makeup, and whatever reverence I heard in their voices suddenly washed away, just like the rain they were singing about in the chorus. It didn’t help that when Cauthen’s label, Lightning Rod Records, posted about the video on their Instagram, they drew attention to the fact that it had been played 100,000 times in less than 24 hours. Talk about self-serving.

I gave their cover a couple of listens, and in my eyes (indisposed), it wasn’t as gauche as Robisheaux and others made it out to be. But to paraphrase Cornell himself, no one sings like him anymore. That’s really what made me sad, because Chris Cornell’s death is yet a reminder that 1994 is long gone, as well as everything I thought when I heard that song when it was new