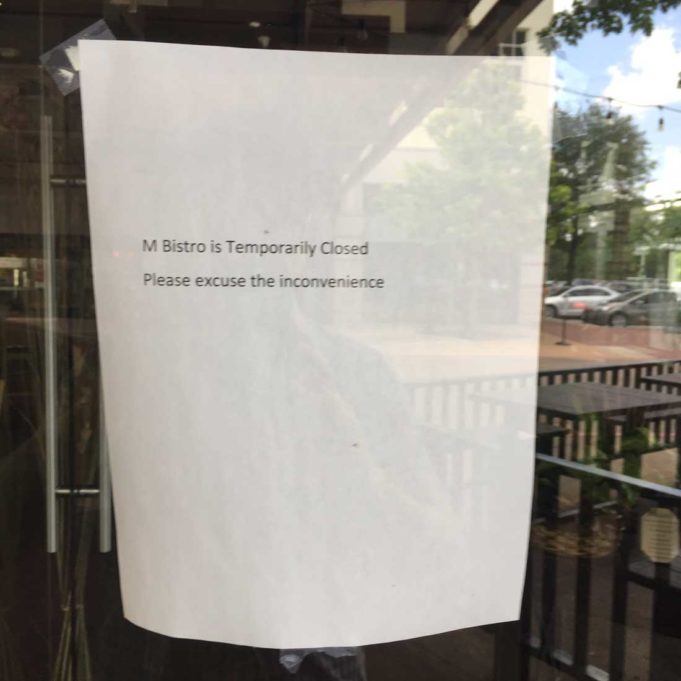 The sign on the door reads, “M Bistro is temporarily closed. Please excuse the inconvenience.” And by “sign,” I mean it looks like someone hastily typed out two short sentences, centered the message on a piece of printer paper, and taped it to the door. Through the windows of the oft-changing Montgomery Plaza space, the tables and chairs look set, ready for service. Despite the appearance and the note on the door, there’s little doubt among observers that M Bistro (2600 W 7th St, Ste 153, 817-338-0066) has served its final meal.

Every time a new restaurant occupies that corner spot, snark jockeys like me make jokes about that cursed location and point out that six eateries have already turn-styled in and out over the last decade or so – and none have made it to the two-year mark. So why? What is it about that location that has made it so toxic?

On a Facebook rant, the restaurant’s chef, Steve Mitchell, formerly of Yucatan Taco Stand, threw some shade on his business partners, the ownership group at Sushi Axiom. Mitchell said, among other things, “I found out today that my partners have been lying to me about financial matters … having plenty of capital to sustain during the opening months.”

He went on to say that his partners suggested all of the other restaurants that opened in that location failed because of bad food and service, and he knew that his operation was sound on both of those fronts. But not everyone agreed.

It’s true, in my opinion, that there hasn’t really been a great restaurant on that corner. The food at Chef Eddy Thretipthuangsin’s Bite City Grill was the best of the sinkhole’s other inhabitants, but the service was a sometimes hilariously calamitous mix of missed orders, poor boundaries, and long ticket times. King Crab Tap House, the space’s most recent tenant before M, was good but wildly inconsistent.

I was never able to eat at M Bistro, but our food critic Lauren Phillips, a former chef himself whose opinion I trust above all others, gave the eatery a mostly positive review (“Old-School Decadence,” May 24), noting that the menu’s ethos was downright Caligulan in its buttery, rich scope. A Fort Worth Star-Telegram review by Anna Caplan, a great critic in her own right, ripped the food and ambiance and made the place sound like restaurant amateur night. Two well-respected critics had vastly different experiences, and that’s usually a telltale mark of a kitchen’s inconsistency.

To help me make sense of the curse, I consulted a restaurateur friend familiar with the location’s inauspicious history. He spoke on the condition of anonymity. The voodoo, he said, is total claptrap, adding that Gloria’s, Boomerjack’s, Sushi Axiom, and other eateries have been doing well in that shopping plaza for years. M’s food, he said, was OK but not good enough to distinguish itself from the area’s crowded restaurant field. And, he pointed out, the restaurant group that Mitchell blamed has enjoyed plenty of success over the years, though he stopped short of absolving them.

My source also suggested that the rent, roughly $16,000 a month, was too much to bear for a new place with a menu price point that isn’t approachable for most folks. (Entrées were as high as $28.) He thought the landlords would be well-served to break up that space into two storefronts – of course, he noted, that creates a ton of costly chaos with getting inspections, building contractors, grease traps, and another liquor license, all the while not taking in any money.

So it looks like the so-called curse has claimed another casualty. And the Sushi Axiom group, which has a lengthy lease on the space, will have to find another tenant that doesn’t mind the location’s dream-smashing history. I just hope the next victims go in with their eyes open and take with them a couple of priests armed with holy water.