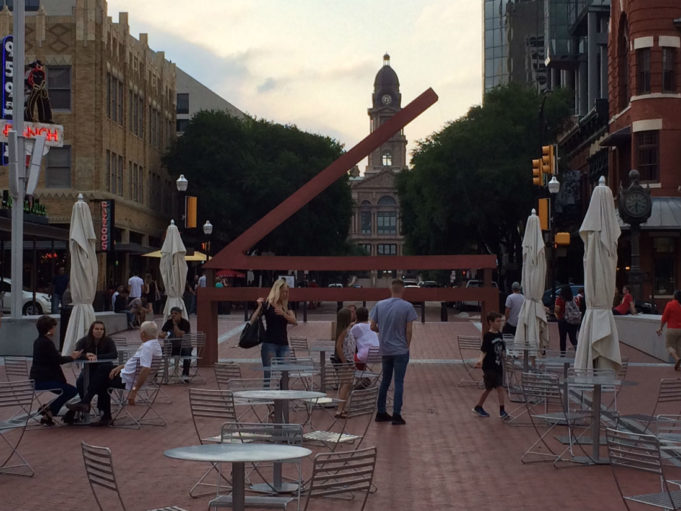 The stifling heat of a Texas summer chose the last day of the Cliburn to hit us, and not with full force. Those who are in town for the competition can be glad to have escaped it. In Sundance Square, the competition has set up a giant wooden Cliburn logo, as you can see in the picture accompanying this post. Nice touch, though I think a brighter shade of red might have been more eye-catching.

Rachel Cheung starts the day with Beethoven’s Fourth Piano Concerto, and there’s an argument to be made for sticking with what you’re good at instead of playing a Prokofiev of Rachmaninov piece that doesn’t suit you just because it may please the judges. Cheung makes that argument quite well with an immensely admirable performance, one that conjures up that sunlight-on-a-mountaintop feel of Beethoven’s music. It’s all well-judged and in unfailing good taste, and if the dramatic tension goes slightly slack in the second movement, that’s hardly fatal. I’ll always prefer the blood-and-fire musicians because that’s the kind of listener I am, but I’ll always reserve a place for the finesse players like her.

Speaking of sticking to your specialty, Georgy Tchaidze comes out armed with Prokofiev’s Third Concerto. You’d think he’d be able to crush this, but instead, he leaves me trying to remember the last time I’ve heard Prokofiev’s music so denatured and devoid of menace. Much as it has been throughout this competition, Tchaidze’s playing is just sort of there. Leonard Slatkin leads the Fort Worth Symphony Orchestra, and hearing him get the piece’s icy-wind sound out of our local musicians is an immense pleasure. Tchaidze suddenly seems to wake up right at the climax of the final movement, giving those whirls of notes the electrical thrill that’s been missing from the rest of the concerto. That’s too late, though. Isn’t it?

Slatkin saves the best for last. I’ve heard FWSO play Tchaikovsky’s First Piano Concerto as part of this competition before, but this is the first time I’ve heard it and thought, “Oh, dear God.” The opening French horn fanfare seems to come out of the sky, the strings make the first movement’s famous theme rattle along the floorboards, and the flutes provide such a finely shaped melody for the theme of the second movement. In this concerto, our hometown orchestra sounds like a world-beater. Daniel Hsu is right there with them, deftly handling all the work’s shifts of mood from playfully humorous to those painful Tchaikovskian bursts of melancholy. The pianist plays some hair-raising octave passages, but he also knows when to be simple and straightforward with things, too. Just like Kenneth Broberg’s the other night, this performance has everything you could wish for. I’ve applauded all the contestants out of courtesy, but I vowed not to join crowds in standing ovations unless I was feeling it. This time, I was feeling it.

I’m not picking winners here, because every time I do, I’m wrong. I will say, though, that the Americans left in this competition have not only been the most consistently good but also the most creatively inspired. Kenneth Broberg and Daniel Hsu have given me both visceral thrills and intellectual satisfaction, though. It’s all in the judges’ hands as I write this, however. I’ll be back to report on who they’ve crowned winners of this Van Cliburn International Piano Competition.