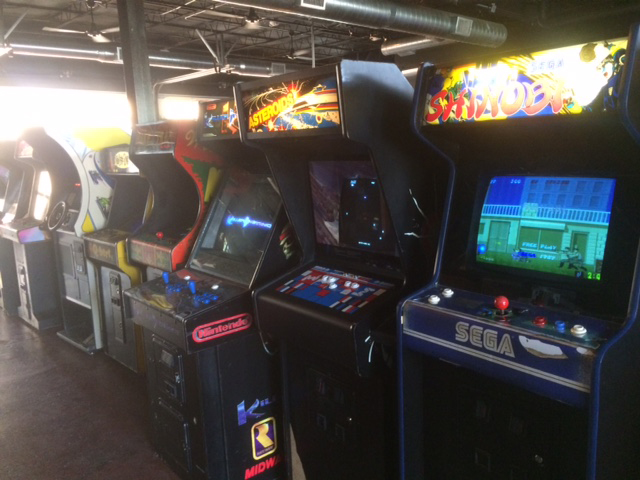 Back when I had dreams of things like mansion ownership and limitless income, I used to talk about how I’d convert the basement of my hypothetically extravagant house into the roller rink arcade of my wildest dreams. My fantasy included threadbare red carpet, bars for both booze and nachos, and every arcade game from the late ’70s to whatever year Virtua Fighter debuted. I figured that place would exist only in my imagination. When Dallas’ Barcadia opened a Fort Worth location in 2011, my dreams were more or less realized. But then the Arlington location of a bar arcade chain called Free Play opened up a couple of weeks ago, and now my arcade fantasies have really come to life.

I’d like to point out that Free Play does not exactly match what was floating around in my imagination, because this is 2017, and I don’t even think you can buy that kind of ratty carpet anymore. Free Play is basically two large rooms with some graffiti-style video game-themed murals on a couple of its walls and a judicious use of the horizontal wooden slats that have become the aesthetic signifiers of this decade. While the chalkboard menu behind the bar is fun to look at – kudos to whoever draws the vintage arcade cabinet art-inspired beer listings – overall, there’s not a lot on the walls.

Against the walls, however, is a cavalcade of glorious, glowing, beeping nostalgia. As much as I frown on living in the past, I am a sucker for the visual pop and high drama suggested by the fantasy and sci-fi characters painted on the sides and around the screens of vintage arcade cabinets. Each one is a window into some fantastic universe of primary colors and heavily stippled shadows, and walking around Free Play’s collection of games is like a stroll through an interactive museum, except Free Play is a museum where you can also get a beer and a bite. Besides games, Free Play offers a hefty selection of craft drafts and cans, as well as a nice variety of pressed sandwiches and pizzas. The Classic, a grilled cheese served with a huge helping of potato chips for $5, is a good bet, but the main draws, obviously, are the games.

Free Play has the classics you’d expect, like Pac-Man, Joust, Missile Command, and Galaga, plus relatively newer ones like the most recent iterations of the Street Fighter franchise, as well as a nice array of pinball games. But what really wowed me were the lesser-known titles from the glory days of yesteryear. Do you remember a game called Balloon and King? What about Blueprint or Gravitar or Scramble? Free Play has those and a whole lot more – even a game based on Journey that plays digitized versions of the band’s biggest hits.

For me, the games triggered a lot of memories. Playing a top-down Contra-esque shooter called Heavy Barrell, I was mentally transported back to 1989 and a Putt-Putt/waterslides/arcade combo called Golf Land, known for its small lagoon populated by smoke-belching bumper boats. I could practically smell the chlorine drying on my sunburned 11-year-old neck. Because the games are set to the titular free play, you actually have a chance to beat them without dumping an entire allowance’s worth of quarters into their slots.

For purely nostalgic purposes, Free Play is about as impossible to beat as Missile Command. Even though the visual ambience isn’t 100 percent all-in with the era its retro games harken back to, the endless loop of ’80s pop hits drifting from the speakers does plenty of heavy lifting in the time-travel department. It’s also a ton of fun for a great price and all ages, so you can show those iPhone-swiping kids of yours what you used to do for fun before you were old enough to drive. All in all, Free Play nails a high score across the board.