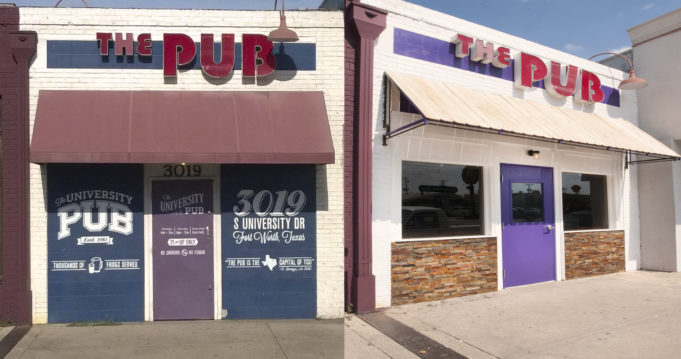 On my maiden voyage to the University Pub in 2004, we were both fresher-faced. I was a 27-year-old newly minted divorcée with a stressful job in Dallas and a long commute. I’d recently started dating a TCU grad student, and he thought our second date was time to introduce me to his home-base bar and all his friends – no pressure. Luckily, between Ass-Kicking Chicken shots and plastic “Chuggers” of beer, I bonded with people who inevitably would influence my decision to put down roots in Fort Worth instead of Big D.

Pub regulars and many TCU alums know owner Dave Mitchell and have seen his children pass through their teenage years, graduate from college, and move into jobs outside of the service industry. For Dave’s daughter Kelsey, though, it became increasingly apparent that the story of her professional future included carrying on the familial legacy of this bar. But like many things that were born in 1981, this University Drive staple was looking a little careworn around the edges compared to its two younger business neighbors, Buffalo Bros and Dutch’s Hamburgers. So Kelsey, along with her significant other Bobby Corbin, recently embarked on a project to give her dad’s middle-aged business a facelift.

They started with a few easy items on the checklist and two years ago went nonsmoking indoors. It was a success. Current TCU students were not raised when smoking was a resigned fact of bar life. Recently, the two tiny TVs we once watched Rangers baseball on through binoculars were replaced with 10 large flat panels spread throughout the space, making the Pub a legitimate place to catch a game. In the past, the bar was closed on Sundays, but new hours are coming: 3pm–2am daily and an 11am open on Saturdays and Sundays during football season, a.k.a. Life.

The biggest obstacle to consider was the dark, nearly invisible University Drive entrance. Before the Mitchells bought the Pub in 1998, some wayward frat bros decided to chuck cinder blocks through all the windows down that stretch. Instead of giving them another glass target, the former owner walled up the front and put in a solid metal door. To tackle this part of the project, Kelsey and Bobby cajoled an affable and handy crew of friends to create an entirely updated façade that isn’t so bleak. When I visited on Sunday to check out the progress, the guys had just put the finishing touches on a wooden plank awning over a wall of windows and a glass-paneled door. The exterior was also repainted a location-appropriate purple and white, and the whole effect reestablishes the University Pub’s role as the de facto capital of TCU.

For all this talk of new things, I’d be remiss if I didn’t point out what is not changing. The goofy swag – flags, football helmets, bras, Mardi Gras beads, beer signs – stays hanging around the ceiling. The pool table continues holding court in the back room, and the condom dispenser in the women’s room still reads “Insert Baby Here for Refund” over the 25-cent slot. Peter, the Pub’s unofficial mayor, will be there to talk about Hawaii or Chicago Bears football if you slide in for happy hour.

But most important to the legions of TCU alums and old fans like me, you can walk up to the walls of Polaroids and find yourself, in your younger days, and check to see how much your own face has weathered over time.