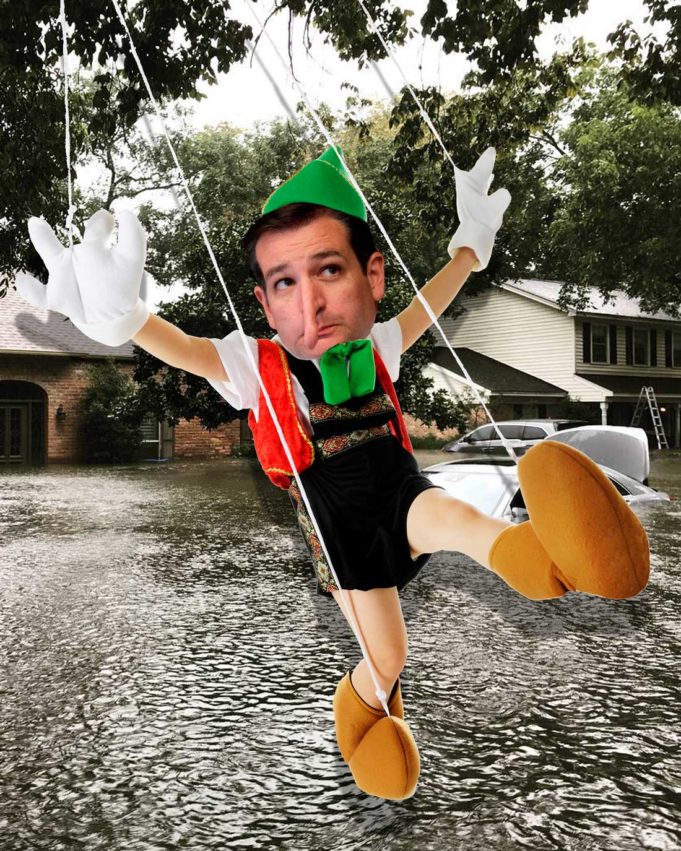 Besides being one of the creepiest senators around, Ted Cruz is also among the most two-faced. It has been painful to hear the master of polarizing, incendiary rhetoric babble on about non-partisanship unity amid the Hurricane Harvey rescue efforts. And it’s doubly hard to listen to Cruz clamor for federal aid after he and other Texas senators and members of Congress voted against relief for Hurricane Sandy victims after that storm devastated the northeastern United States in 2012.

As people – particularly those in the Northeast – point out his hypocrisy, Cruz is countering by saying he voted against the Sandy bill because it was overloaded with unrelated pork-barrel projects.

Well, five years is a long time, but not too long to go back and check on the internets. Sure enough, various news media have scrutinized the Sandy bill and determined, lo and behold, Cruz is up to his mealy-mouthed tricks again. The Washington Post’s Fact Checker column gave Cruz “three Pinocchios” for straying so deeply into the Forest of Untruth. The paper’s grading scale goes like this: one Pinnochio (“some shading of the facts”), two Pinnochios (“significant omissions and/or exaggerations”), three Pinnochios (“significant factual error and/or obvious contradictions”), and four Pinnochios (“whoppers”).

Maybe Liar-in-Chief Donald J. Trump did something historic (for him) and actually told the truth during the 2016 presidential campaign when he dubbed Cruz as “Lyin’ Ted” and said this about him: “Lyin’ Ted Cruz. Lyin’ Ted. Lies. Ooh, he lies. You know Ted. He brings the Bible, holds it high. Puts it down. Lies.”