“My favorite television and film actors all came out of the theater,” explained Baron Vaughn, an L.A.-based stand-up comic, classically trained actor, and amateur philosopher probably best known for his portrayal of Bud on the Netflix original series Grace and Frankie alongside living legends Jane Fonda, Martin Sheen, and Lily Tomlin. “If you’re really good at acting, it doesn’t look like you’re acting. I wanted to have all those tools so I could make it look like I’m not doing anything.”

Ahead of his final stand-up workshop at Amphibian Stage Productions last Saturday, I had a chance to chat with the hilarious and meticulous entertainer about everything from his writing process to the philosophy of what “it” really is that he’s trying to not look like he’s doing: extracting the perceptions of one individual — the artist — and implanting those perspectives into the minds of others — the audience.

Sometimes that maneuver requires a pivot in form. Baron told me about an old joke idea he’s been kicking around that he only recently realized is much more of an essay. He didn’t go into the subject matter but explained that the response to this joke was usually more of a pondering “hmm” than an out-loud laugh. Occasionally, an intriguing idea will surface as a stand-up bit and then turn out to be something else entirely, and though comedy is Vaughn’s bedrock, his true nature is broader.

“The difference between stand-up comedy, theater, and television is sort of like the difference between owning a restaurant, cooking the food, and eating it,” he said. “It’s all about food, but it’s different things entirely. Comedy requires a lot of laughter in a lot of different places in different rhythms. … I’ve been learning that not everything is a stand-up joke. Some things are different forms.”

Still, when Baron took the stage last Saturday night, it was clear that this visit was just for laughs – the 35-year-old had a full house roaring throughout his entire hour. Afterward, he even seemed to work out a joke he’s admittedly been struggling to finish for years during a rather unconventional Q&A, where he opened up the floor for audience members to ask him about everything from what he will name his unborn child to how he knows when a bit is finished. His jokes felt alive and fully formed, though he admits that this residency is more of a workshop for writing and testing new material in front of a live audience than it is a comedy gig. In fact, this is his second year performing this workshop series at Amphibian, an opportunity afforded him thanks to his connection with college classmate, Dallasite, and fellow stage actor Brandon Murphy.

Exploring themes like politics, science, being raised fatherless, and even space aliens, Vaughn has spent his life in pursuit of mastering the ability to spot the thread of humor that can tie seemingly unrelated topics together. Citing influences like Richard Pryor and David Bowie, Vaughn concedes that many of his favorite entertainers have this elusive ability to create their own atmosphere and world. These creative masters offer a lens that can reveal something far more consonant and appealing than the profound boredom we too often feel.

With a baby on the way, Vaughn can’t confirm whether he’ll be back again this time next year to participate in the series, but he has helped establish Amphibian’s connection with the stand-up world by introducing to the Phibs illustrious comics like Emily Heller, who workshopped material in front of Panther City audiences two weeks prior. The arrival of these comedy stars in Fort Worth is a cause for cathartic celebration. No matter what’s going on out there, it still feels good to laugh. 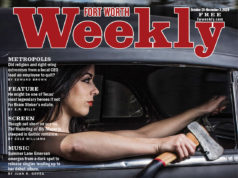