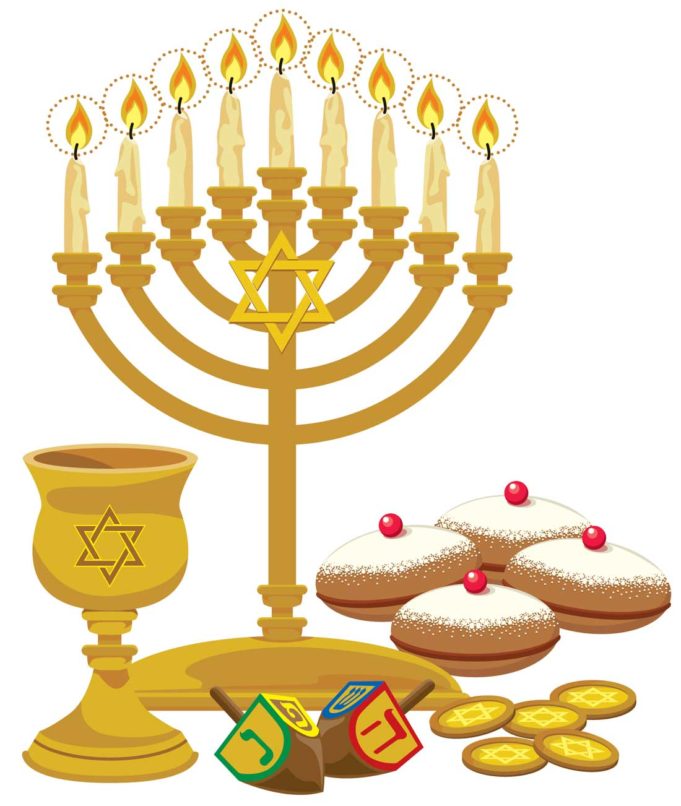 The celebration of Hanukkah (or Chanukah, or Hanukah if you prefer) is totally old-school. Hanukkah predates the Christmas story, but the celebrations aren’t in a competition. Hanukkah is a minor religious holiday in Judaism, unlike Christmas, which is a really big Holy Day. Jewish holy days are in the fall, and Passover in the spring is pretty special, too. At Christmas, people tell the miraculous tale of the birth of the Christ child. This story has been embellished and burnished over the years, and depending on which flavor of Christianity you practice, there are some interesting add-ons that leave most of us non-Christians politely scratching our heads.

Incidentally, when you say “Season’s Greetings” or “Happy Holidays,” you’re not part of some crazy “war” on Christmas. In addition to the one day a year that almost everybody gets off from work, the end of November through the beginning of January is full of celebrations and holy days for Judaism, Islam (depending on whether or not a Muslim actually celebrates the birth of his or her prophet Muhammad), the Wiccans, Buddhists, Zoroastrians, Mexican Catholics, Orthodox Christians, and the Japanese. Many of these celebrations predate the birth of Jesus. Is it any surprise that most of these celebrations include exchanging gifts, singing, and festive decorations?

No, friends. The real war being waged is by people who believe that only their holiday is important. Need more proof? When my kid sings in her public school choir this time of year, everything’s about God and Christmas. Seriously, they’re not just singing generic praise songs to the deity honored by Christians, Jews, and Muslims. They’re singing about the baby Jesus and the shepherds and the angels and Mary. And my tax dollars pay for all this. So really, your insistence on “Merry Christmas” (if you do insist on it) is just a wee bit of overkill. I feel bad for the atheists and the Wiccans. They’re the ones who have to put up with the rest of us during this holiday mishmash.

You don’t hear Jews complaining about a war on Hanukkah –– even though there really was one. About 150 years before Jesus’ birth, a group of Jewish zealots known as the Maccabees fought a large army of Syrian-Greeks bent on spreading their pantheistic world viewpoint. King Antiochus IV stormed Jerusalem, killed a bunch of Jews (and anyone else in his way), and took over the holy temple. Why? Because the Jews worshipped one God and didn’t particularly care to refer to that God as Zeus or make sacrifices to idols of gods that purportedly controlled the sea, the weather, or the land. Please consider as you tuck your baby Jesus into his crèche that if it weren’t for those uber-Jewish orthodox zealots who stood up, you’d probably be tucking a baby Apollo into his sun chariot instead. Also, when baby Jesus grew up, he spun a dreidel and learned about his great grandparents’ role in what I like to call the Maccabees’ Last Stand.

Like many things about Jewish festivals and holy days, food takes center stage. Hanukkah is pretty much: They tried to kill us, they failed, let’s eat! The main commemorative comestibles –– sufganyot (jelly-filled donuts) and latkes (potato pancakes) –– are heavily fried to remind us of the miracle of the holy oil in the menorah that lasted for a staggering eight nights when the Maccabees finally purified the temple after the Syrian-Greeks defiled the place with pig’s blood (messy) and idols (rude).

Sufganyot are easy to replicate with zero effort –– go to your favorite donut shop and get the raspberry-filled ones. If you really want to be Martha Stewart on the holiday, take them home and sprinkle with powdered sugar. Voila! Pilaski’s Donuts in Arlington has never done me wrong when I’ve needed to fake my way into the customary holiday food of my grandmothers. Although not officially traditional, I’d also posit that the big-as-your-face apple fritters at Paul’s Donuts, Subs, and Gyros would substitute well (still fried in oil, probably Maccabee-approved).

Unless you count Whataburger hash browns (and most Jews don’t), there’s no convincing way to fake a latke. However, Taste of Europe’s potato pancakes (served with applesauce and sour cream, like Bubbe used to do it) come really close. There’s more flour in the batter than in a traditional latke, but that creates a delicate, fluffy texture that’s a cross between a real pancake and hash browns. The koludnys –– potato pancakes stuffed with a meatloaf-like ground chicken and beef or savory mushrooms –– are also sublimely tasty. Taste of Europe is part restaurant, part Eastern European deli and marketplace. You can shop for intriguing-looking Russian groceries, a Gorbachev-era set of military pins, amber pendants the size of a baby’s fist, the obligatory Russian nesting dolls, or even a carved wood Nativity scene complete with wise men. It’s cool, though –– all the people in that story were Jewish or Arabic, refugees, and/or homeless.