If you’ve spent time on the newly redesigned South Main Street, specifically around the intersection of Pennsylvania Avenue, you’ve no doubt noticed a series of tall metal poles sticking up out of a construction site on the northeast corner of the intersection. Those poles mark the location of another small-scaled mixed-use building going up in the Near Southside, still Fort Worth’s best example of up-and-coming walkable urban design.

Now under construction is a new two-story building designed by local architecture firm Bennett Benner Partners that will feature office space on the second floor and retail/restaurant space on the ground floor. The design looks to be a contemporary take on the kind of small mixed-use structures built around the Near Southside in the early 20th century, with a façade of masonry and metal wrapped around tall windows. 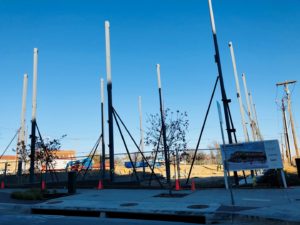 When completed, the building will be around 25,000 square feet. Though nowhere near as large as the recently completed Highpoint Apartments and UT Southwestern developments across the street, the new structure is similar in size to the restored Coca-Cola building diagonally across the street to the southwest and provides a contrast from the larger structures.

There’s no word on potential ground-floor tenants, but I’d expect to hear more about that when the building is nearing completion. Considering the location at the corner of one of South Main’s most notable intersections, I wouldn’t be surprised to see a new dining or drinking destination going in.

The lot in question has been vacant for as long as I’ve been paying attention to such things. It’s no coincidence that it’s getting redeveloped now, after South Main itself has been completely reconstructed to be a much better environment for pedestrians. Infrastructure form tends to drive development form; if you build walkable, people-first infrastructure, you’ll get walkable, people-first development. (The inverse is true, too, which is why so much of Fort Worth looks the way it does.) By rebuilding the street with wide, inviting sidewalks and combining it with the Near Southside’s progressive form-based zoning and development standards, the stage has been set for new development that’s much more walkable.

This is not only about being pedestrian-oriented, though. South Main and Pennsylvania both have dedicated on-street bike lanes now, so new developments like this also provide even more motivation to get people out of their cars and onto two wheels. Hopefully, the building’s developer is planning for this and will provide plenty of safe bike parking.

New walkable development like this is a part of the long-term process of remaking Fort Worth’s central city, returning long-neglected neighborhoods like South Main to their old lively state by getting back to the fundamental foundation of great cities: human beings on foot. Make city streets and places that people want to spend time in, and urban Fort Worth’s success stories will continue.