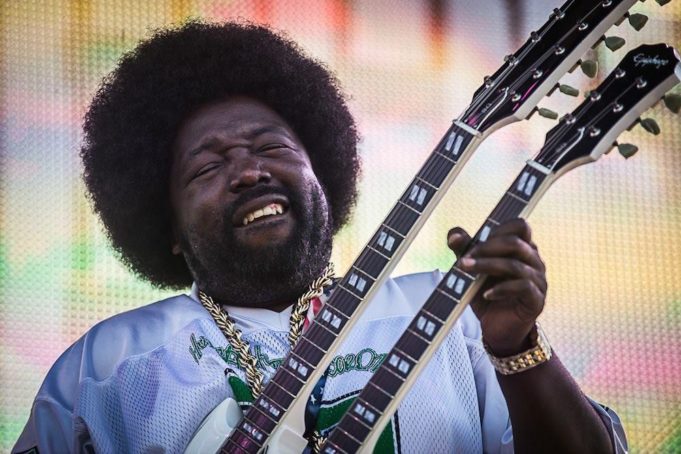 1) The Cush have a new EP out this evening, and they’re playing a release show at Dreamy Life Records and Music (1310 W Allen) with Wire Nest and the Deluxe. The show gets rolling around 6pm, it’s all-ages, and it’s free. Also free: my advice to grab a copy of the Cush’s new recording. The band’s core members, husband-and-wife duo Burette and Gabby Douglas, have been making music together longer than a lot of show-goers have been alive, yet they never run out of ideas, and every new record offers your ears shimmering, fuzz-covered, hook-centric psyche rock. Wire Nest’s sample-rooted, dub-influenced guitar explorations are fun to watch unfold in an intimate live setting, too. The Deluxe’s vibe is a wall-of-sound shoegaze experience; if effects pedals are up your alley, you should check out this show. This is the Cush playing live for a KXT in-studio jam:

2) Also on Friday: Native Fox, All Clean, Whep at MASS (1002 S Main). Native Fox has a highly polished, tight-as-hell indie pop sound that, if you’re old and still playing in bands, will make you wonder what the fuck you were doing with your life when you were their age, and when you go to work on Monday, you’ll likely hope young bands like Native Fox get sizeable followings, hit the road often, and garner a helpful “industry team” so that they can become a successful and popular band, and also that said successful and popular band’s members are individually wise enough to stay out of debt and plan ahead financially, because time passes whether you like it or not, and entering and living through one’s 30s is easier when you aren’t playing catch up for all the slaphappy nonsense people burn through in their 20s. Cover is $7, show is 18+. Native Fox played at UTD last year, and you can relive that experience in this video:

3) Imagine the smell of a hoodie cured in fog of Blue Dream, nag champa, and car air freshener; that’s basically what this listing is: Afroman is at the Rail Club (3101 Joyce) on Friday night, joined by reggae band Burning Slow, hip-hop collective/high-school-bad-crowd-who-are-just-gonna-get-you-in-trouble the Stoners Circle, and Dallas rapper EzRich. Show is all-ages, doors are at 7pm, cover is $20. Bet you didn’t know Afroman shreds on a double-neck SG – I mean, it would be weird if he didn’t, to be honest:

4) Man, lots of things going on Friday night! Here is a show at the Ridglea Lounge (6025 Camp Bowie): Partaker, BULLS, Better Now, Echo Spring $8 All ages. The following is a Better Now song in video format:

5) If you didn’t get tickets to They Might Be Giants’ sold-out Granada show on Saturday, you can still catch them that afternoon because they’re doing an in-store performance at Good Records (1808 Greenville, Dallas) at 4pm. Do I need to tell you to get their early? What about brushing your teeth twice a day or putting on deodorant? C’mon, we’re adults here. These are stuff you should just know to do already. TMBG fans already know about Dial-A-Song, but I had to look it up; it’s literally a number you call to hear a recording of a song. Here’s a video for one of those, which is a song about dogs called “Dog.”

FULL DISCLOSURE/WRITER BIO ALERT: per editorial suggestion, in addition to writing about music and other shit for the FW Weekly, I am an investor in a venue/bar called Main at Southside, colloquially known as MASS. I also bartend at the Boiled Owl Tavern, a bar that also hosts shows a few times a month. And, since we’re on the subject of warning you against what may be perceived as my own icky, unseemly self-promotion and/or conflicts of interest, I play bass in the following bands: Oil Boom, Son of Stan, Darth Vato. Sometimes I talk about one or more of those entities in this space, but I assure you that it has very little to do with my own vested interests; it just happens that the aforementioned venues and bands are part of the Fort Worth music scene, and this music scene is something I care very passionately about, as I have been part of it since 2002.