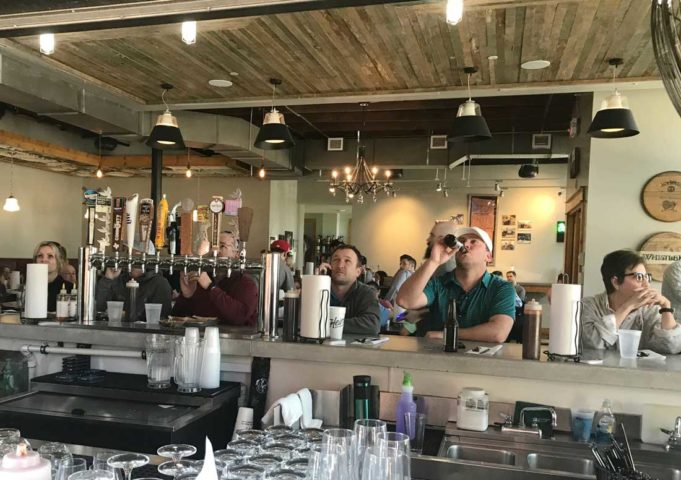 Lately, life’s been throwing me a few curveballs. Realistically, you can’t be a human being in your fourth decade and avoid being hit by a pitch now and then. I’m not alone, though, as many of my friends, family, and peers also find themselves in that confusing place where the game of living isn’t all slumps or grand slams. The up-and-down nature of life is also written on the faces of the bartenders and servers I encounter every day in my professional life and when I’m out gathering fodder for this column. There is an expectation that the people who sling our drinks and serve our food are also, somehow, in charge of team morale.

I’m also occasionally guilty of assuming the mere decision to hit up a bar or restaurant is somehow going to magically fix any of the junk that is currently messing with my mojo – and generally that has proven patently false. But when I woke up this Monday morning feeling less like Bette Davis in her prime and more like an aged, busted-up Crash Davis in Bull Durham, I decided to take a mental health day anyway.

The weather was a glorious-and-rare-for-North Texas 70 degrees with sunshine. I knew I wanted atavistic satisfaction of tearing apart meat, needed to eat my feelings with a massive quantity of potatoes, and was craving an ice-cold beer. My date and I had our two dogs with us, so finding a Fido-friendly venue was a must. I scanned my mental list for places that offer all of these things, but, in the end, I threw myself headlong into the warm, burly, dad-bod-esque embrace of Heim Barbecue and Catering on West Magnolia Avenue.

When we initially reached the patio, it was 10:50am, and there was already a line of people gathering outside. When the staff officially cracked the doors, bartender Patrick waved us over to a seat at the window in the sun with a promise of full food service and cold beers. He cheerfully greeted László and Miss Gigi, our two four-leggers, and pointed out the water bowls set up for them. We felt like he was inviting us into his personal home and was setting up things just to make our day better. After some cordial chitchat about Patrick’s upcoming camping trip and the reemergence of the sun, our food and beers arrived and, like a meaty/alcoholic Xanax, temporarily melted away my stress like so much rendered beef fat.

Patrick’s brand of attention to detail is growing exceedingly rare in this often hyper-critical and stressful world of Yelpers and self-proclaimed food critics. Job satisfaction among service industry professionals is crashing. Customers often bring unreasonable demands to the table and leverage their ability to write poor reviews as a type of extortion for freebies and perks. Add in some amateur food bloggers who may eschew ethical standards of conduct and expect unreasonable levels of special treatment, and it’s a recipe for disaster. On my visit, I was reminded that people like Patrick are what make places like Heim worth my loyal patronage, especially on days when life is sort of kicking your ass.

Eventually, we closed our tab, packed up the leftover bacon burnt ends and baked potato salad, and polished off our beers. We wished Patrick a continued afternoon of good sunshine and happy customers and moseyed on down the road. But I noticed I was lighter and happier than when I first sat down. Service, at its very nature, is meant to guide a drinker or diner toward a more pleasant feeling leaving than entering. Heim’s employees seem to understand this, and I’m happy to chalk the day up in my win column.