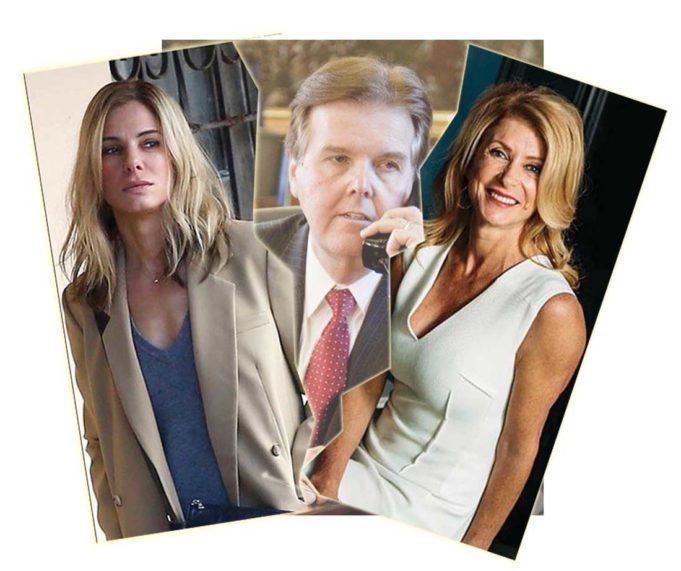 Lt. Gov. Dan Patrick really does not want the Wendy Davis biopic to be made. So bitterly opposed to the very making of the story of Davis’ famous filibuster and hardscrabble upbringing is he that he is unusually prepared to make himself look like a petty prick in public. Even pettier. Even prickier. (When Patrick opines, he has a look on his face that leads us to believe that in his mind’s eye, he is making the swoosh of an imaginary cape.)

Unusual because, even for a man who appears to relish his self-image as a raffish cad, his latest moves look to every objective observer like pathetic party-driven pettiness.

Imagine the wilting of Sandra Bullock’s self-worth when Patrick shared his disappointment of the Oscar-winner’s latest role. Turns out he “used to like her,” but now it “saddens” him that Bullock chose to play Wendy Davis in Let Her Speak. It is an open question why Patrick thought conservative think tankers at the Texas Public Policy Foundation a couple of weeks ago wanted to know: “If I have anything to do with it, I’m not going to let [the filmmakers] use the Senate chamber to shoot.”

The movie retells the tale of Davis’ 13-hour talk as she attempted to block a draconian GOP-backed anti-abortion bill. As a then state senator representing Fort Worth, Davis was successful in temporarily blocking the bill ,only for Gov. Rick Perry to call a special session to shoehorn the legislation in to law. Despite the ultimate futility of Davis’ filibuster, the effort gained national attention, resulting in an unsuccessful bid to become state governor and copious gigs as a cable news pundit.

It is worth noting that while the filibuster is the fulcrum of the movie, the whole story is very much one of the life of Wendy Davis. This makes Patrick’s opprobrium even smaller and narrow-minded, surely, when he states that Davis and her supporters “have already disgraced [the Capitol] once. They’re not going to do it a second time.”

Hold your horses there, Danny Boy, you long drink o’ water. The final decision is out of your malevolent hands. The Secretary of the Senate, Patsy Spaw, claims that filming is banned in the Senate Chamber and that any exceptions to this rule are hers to grant. One such exception was made for the Brad Pitt-leading Tree of Life on the urging of Texas’ film commission and Perry (who probably imagines that Pitt plays him in the movie of his life, which exists only in his head).

So there it is. Dan Patrick throwing his straw-like bodyweight behind something he has no control over simply to air a grievance he still holds five years after the fact. That may be the very definition of “petty.” And “pricky.”

A Patchwork of Tragedies