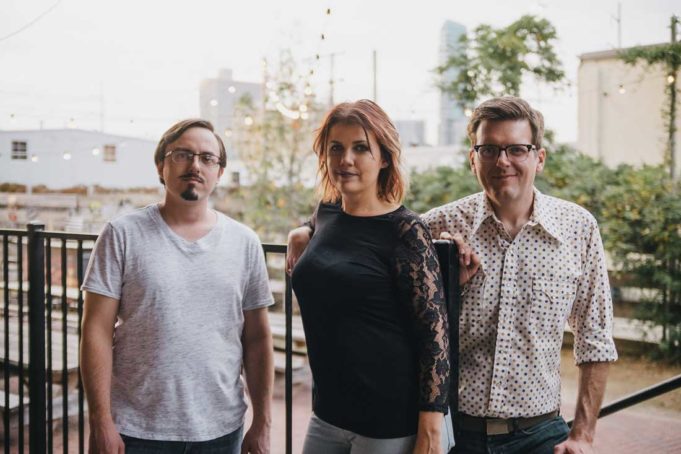 Let me go ahead and get this out of the way:  I absolutely loath “twee pop” – the phrase, not the music. I enjoy much of the chiming, boy-girl-harmony-driven indie-rock sub-sub-genre to which the phrase applies. Although the term — borrowed from a British derogative idiom for “quaint” or “excessively sentimental” — is admittedly fitting for a specific type of syrupy-sweet underground pop tuneage, “twee” is a truly punchable word. Don’t even get me started on the re-appropriated winsome descriptor’s ice-pick-in-the-ear-canal-inspiring synonym “cuddlecore.” Gross. (Editor’s note:  Something on the order of 1,200 words were trimmed from this rant.)

As much as “twee” is an intentionally irritating word that I thought had been relegated to the occasional Gen-X urban professional’s nostalgia-trip brunch conversation, the term might have contributed to bubblegum-psych trio Crystal Furs’ growing overseas acclaim. In our social media age, tech-savvy fans of jangle-pop discover new bands through Twitter mentions or by browsing sites like Bandcamp, filtering searches by genre tags such as “twee” and “indie pop” or “C86” (the famous 1986 cassette comp by British music mag NME that essentially defined the genre). It’s through this avenue that Crystal Furs have unwittingly found their way into the ears of hook-hungry Euros and how one of their tunes recently appeared on the radio in Barcelona.

“I still don’t know if there’s much of a Fort Worth indie-pop fan base,” said keyboardist Kevin Buchanan, half of the husband-wife combo that fronts the band. “If there is, we haven’t found it. But it’s still been going strong in places like the U.K., Germany, and Spain. … I want to be very careful and make sure I’m not overstating this.”

The Furs, he continued, are “still a very minor band, but we’re all of a sudden having folks from Europe reach out to us about coming over and planning a tour, which although could be ruinously expensive, is something we’d like to eventually do. The most gratifying thing is how organically it’s happened.”

Some of the recent foreign word of digital mouth is likely the result of the trio’s latest single, “In the Mirror,” which made its internet debut late last month. After a lengthy hiatus of almost a year and a half, during which Furs’ former guitarist and lead vocalist Amanda Hand departed to start the fuzz-pop outfit Big Heaven, the group is again writing and recording material with Buchanan’s wife and one-time fill-in bass player Stephanie Buchanan (Missing Sibling, Grammers) taking over main vocal duties. With drummer Tanner Brown leading the recording sessions from his home studio in the Fort, the three-piece is making its way a few tracks at a time toward a sophomore full-length album.

“There’s some difference,” Buchanan said. “But it’s not like a radical change. There will be some things on the new album that will be different from our first one, and that’s not necessarily because of the change. There will be a bit more variety with some of the songs, but not even things that weren’t already being toyed with before.”

While the Crystal Furs are targeting late summer for the album’s release, they haven’t set an official date yet. You can rest assured there will be a growing contingent of Euro twee-pop devotees eagerly awaiting it.