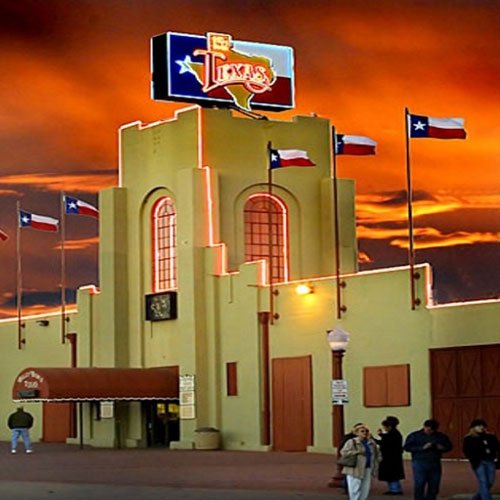 Last Thursday in downtown Fort Worth, Concho Minick, Steve Murrin, and son Philip Murrin sat on hardwood benches on one side of a courtroom –– the plaintiff’s side.

Concho’s biological father, Billy Minick, and stepmother, Pam Minick, sat on the other side of the room, along with Brad Hickman, son of the late Stockyards benefactor Holt Hickman. They’re the defendants.

All are co-owners of Billy Bob’s Texas. All are squared off in what is becoming a protracted and costly court battle. Arbitration attempts have fizzled. It appears that State District Judge Mike Wallach will eventually determine the fate of the world’s largest honkytonk – an anchor business in the Stockyards, a historic area slated for a $175 million redevelopment project.

It’s hard to imagine the Stockyards without Billy Bob’s. The club has been around since the early 1980s, a lifetime in bar years. Internationally renowned, its more than 125,000 square feet of space earned it the moniker “World’s Largest Honkytonk” and has attracted many musical greats to its stage outside of the country genre: Chuck Berry, Bob Dylan, Peter Frampton, Marvin Gaye, B.B. King, Roy Orbison, and on and on. Movies (Baha Oklahoma, Over the Top, Pure Country) and TV shows (Nashville Star, Rock of Love, Walker, Texas Ranger) have filmed there, and numerous live albums by major acts have been recorded there. Mechanical bulls? Ha! Billy Bob’s offered live bull riding.

Fort Worth people are proud of Billy Bob’s.

Sure, the sound and the sight lines suck during shows, and the floor plan is a mess. But there’s only one place like it in the world. It’s all ours, and we love it.

But last week, the plaintiffs were complaining that Hickman and the other majority owners – represented by powerhouse law firm Kelly Hart & Hallman – have been charging their legal bills to Billy Bob’s Texas. Those bills top $1 million and are climbing fast.

Concho Minick, the Murrins, and former Dallas Mavericks general manager Donnie Nelson own a combined 35 percent of the club. They’ve been paying their legal fees out of pocket. With the defendants charging their legal bills to the company, Concho and his bunch have, in effect, been paying both teams of lawyers.

“Now we’re paying 35 percent of the [Kelly Hart & Hallman] bills and whatever else those guys want to bill us for,” Philip Murrin told me after the proceeding.

Other billings include fees for a private investigator. Allegedly, the Hickman team hired the investigator to spy on Concho in an attempt to catch him doing something wrong. This means Concho was partly paying to be trailed by a private dick working for his courtroom rivals. To the minority owners, this smacks of bullies spending big bucks and scamming the system to skew justice.

I asked majority owner Hickman to discuss the situation during a court recess, but he declined.

“Oh, I think you can do that at another time,” he said.

I called him at his office earlier this week and was told that he was out of town and unavailable.

During another court recess, I approached some other majority owners, Billy and Pam Minick, for comment. Over the years, they have been pleasant and helpful during all of our professional encounters while Billy was club manager and Pam publicity maven. They returned to those job positions last summer after Concho was fired.

Billy and Pam were courteous and chatty during the recess as we discussed sore butts from hard benches, Billy’s leg injuries that had him limping, and upcoming concerts at Billy Bob’s. But the Minicks referred questions about the case to their attorneys.

“It’s a whole lot like my grandma’s meringue,” he said. “You whip it into a froth, and it looks bigger than it is.”

Having the defendants’ legal bills paid for by the company could create a cash flow advantage for them, Johnston conceded. But “if the plaintiffs win – and they clearly think they’re going to – they can sue to recover every single dollar that paid for attorneys representing the defendants.”

If they lose, not so much.

Everyone involved in the lawsuit remained tight-lipped early on, when hope remained for a settlement. Those hopes have faded. While Hickman and Billy and Pam Minick are mum, Concho and the Murrins are unleashing their thoughts. During a court recess, the minority owners stood in the foyer outside, willing to answer most any question I asked. You might suspect they are courting the press to curry public favor since they are outgunned on most every front.

The Hickman side owns about two-thirds of the company, an advantage in most business situations. Of all the owners, Hickman’s pockets appear to be deepest. He can probably win any drag-it-through-the-court verdict-by-attrition scenario. Kelly Hart & Hallman bring political heft along with their stable of attorneys. At least a half dozen of them were in the courtroom on Thursday.

And the weight of city leaders appears to be firmly in Camp Hickman. The main dispute between Billy Bob’s owners is the redevelopment project favored by majority owner Hickman and lauded by elected officials and city leaders, who can smell potential tax revenues like bloodhounds on the trail.

Anyone feeling sad about Concho and his dad and stepmom getting crossways in a lawsuit can save their tears. Concho described Billy as a father in name only.

The fallout among owners can be traced back several years, when the California-based Majestic Realty came to town pitching the redevelopment plan. All of the Billy Bob’s owners were interested at first.

“We were all trying to do a deal together,” Philip said. “I’m way pro-developer.”

The union fizzled, he said, because of Hickman.

“We bowed out when [Hickman] said, ‘I don’t give a shit about the Stockyards. I’ll bulldoze it all tomorrow if the money is right,’ ” Philip said. “He said that in one of our meetings.”

The Murrins, like the Hickmans, own many properties throughout the Stockyards. Both sides say they want to maintain the area’s Western feel and history while also bringing in new hotels and retailers, boosting profits and public appeal. But the sides differ on what that entails, with Billy Bob’s minority group of Concho and the Murrins pushing harder to maintain authenticity.

Concho believes the dissolution between partners can be traced to a Fort Worth City Council meeting in 2014. Majestic was seeking $26 million in incentives from the city, and Concho urged city leaders to tighten zone restrictions to control the development.

“I was in favor of the city utilizing form-based code alongside their incentive package,” Concho said. “That was upsetting to [Hickman and Majestic]. It was a reasonable request as a civic-minded person who loves the Stockyards. I think [Hickman] will freely admit that he has been grinding an axe with me since then.”

Concho, who began managing the club after Billy’s retirement in 2011, had been increasing company profits for the past five years, Philip Murrin said.

Hickman’s bunch might be intentionally trying to deflate the value of the company, according to the Murrins, figuring they will eventually be buying out the minority owners. The lower the value, the cheaper the buyout. As an owner and director, Philip still receives financial documentation, and he said the club earned $500,000 less in revenues in January and February compared to the same time period in 2017 when Concho was at the helm.

Numbers seldom tell the full story, the majority’s lawyer Johnston said. For instance, theoretically, he told me, maybe a management team wasn’t paying bills, creating a surplus of money on paper. Then, a new management team might come in and pay the bills to prevent default but concurrently reducing the company’s bottom line.

“It takes more than looking at a number to see who is running the corporation properly,” he said.

He doesn’t buy claims that the majority owners would purposely devalue the company to simplify a buyout.

“It doesn’t make sense to take an asset worth millions of dollars and devalue it in the hope you can force the other side to sell,” he said. “The other side just may decide to buy you out. Any number of things can happen if you run an asset into the ground, and they’re not all good. That’s not a game I would think smart businessmen would play.”

The original lawsuit against the majority owners claimed that Concho was improperly dismissed without unanimous approval of the venue’s owners, as stipulated in a company agreement.

The company’s unusual agreement that requires a unanimous decision by owners on major decisions can be traced back to 1988. That’s when Steve Murrin and then-partner Don Jury teamed up with Holt Hickman to rescue Billy Bob’s from bankruptcy and keep the beer flowin’ and the boots scootin’.

“If there was a difference in opinion, they’d sit in a room and hammer it out until they’d figure out an agreement,” Philip Murrin said. “Nobody got mad and stormed out. It was a great partnership.”

The unanimity arrangement remained after Holt Hickman died in 2014 and was succeeded by his son. Brad would later lead the charge to oust Concho, as the company ––– without votes from the minority partners –– created a majority rule arrangement to allow them to fire him and take control.

During the recent court hearing, plaintiff attorney Andy Sims played portions of recorded depositions with Brad Hickman and Billy Minick. Both of the defendants said under oath that the unanimity rule was in place prior to the filing of the lawsuit.

Majority owner Hickman was called to the witness stand and said two-thirds of the owners agreed to switch to majority rule shortly after the lawsuit was filed. But since the existing rule required unanimity, how could it be changed without a unanimous vote? Sims asked Hickman if he stood by his statement in the deposition that all major decisions required unanimity.

“If that’s what I testified,” Hickman said.

Sims asked if Hickman was saving money for himself by having Billy Bob’s pay for his legal bills.

“I guess that would be correct,” Hickman said.

Also, Hickman agreed that the arrangement meant that the minority owners were paying 35 percent of his defense costs.

Majority lawyer Johnston, however, said unanimity among owners was required only on major decisions” and the case hinges on the court’s interpretation of “major.”

Wouldn’t firing the club manager and charging more than a million bucks in legal fees to the company be considered major, I asked?

“Dollar-wise, that’s major, but it could be a minor decision,” Johnston said. “If you were going to change beer distributors and get a better quality beer for a million dollars, that might not be a major decision. That’s just [a decision] you make in the regular course of business. That, as I understand it, is the battleground.”

Minority lawyer Sims said the defendants have already billed more than 3,000 hours of attorney work to the company, and the legal fees could climb much higher before the case ends.

“To my knowledge, none of these people lack the money to hire lawyers,” he said. “Looks like about a fourth of the Fort Worth Bar Association was in the courtroom the other day.”

The minority Murrins don’t like being in a spending war with someone as rich as Hickman, but they can’t fathom settling for pennies on the dollar when they feel they are in the right legally.

“Right is right, and wrong is wrong,” Steve Murrin said. “The deal we made was for unanimity on any big decision.”