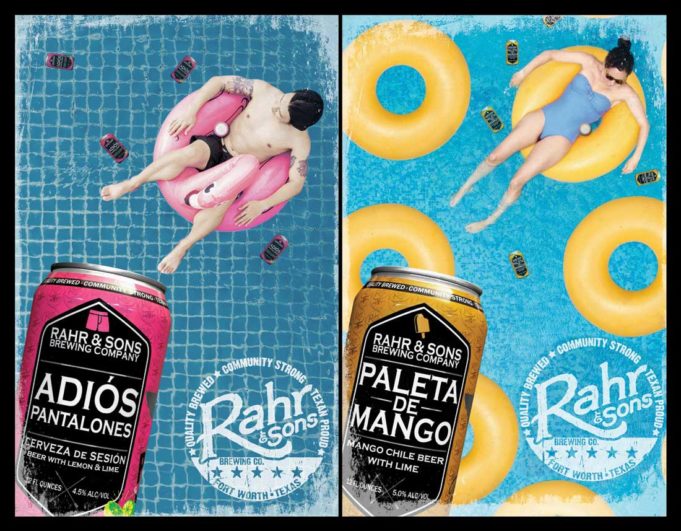 A moment of levity gave Jeff Wood the inspiration for Adiós Pantalones, a recently released lime-kissed cerveza. It was two summers ago, and the Rahr & Sons Brewing creative director was camping in Conundrum Hot Springs in Colorado. As he unwound in the 102-degree spring water, a yell cut through the peace and quiet.

“Adiós, pantalones!” a friend cried midair as he jumped in naked.

Wood immediately saw the marketing potential of the phrase and put it to use early last fall. Now that Rahr recently expanded to seven states, one Rahr beer lagging behind its brethren outside of Texas was Rahr’s USS Fort Worth, named after the freedom-class combat ship built several years ago. The beer’s locale-specific name limited the potential for sales and distribution outside of Fort Worth, Wood said. To fix the problem, the session ale’s recipe was given a light infusion of lemon, lime, and mineral salt (something fans of Mexican lagers are already apt to do on their own), and the beer was re-branded Adiós Pantalones.

With Adiós Pantalones in the can, Wood and Rahr head brewer Nate Swan thought they had the upcoming summer beer schedule finished. Swan planned to ramp up production of Summertime Wheat and Rahr Blonde to meet summertime demand before making his annual mid-year escape to Lake Whitney to fish and lounge. But late last fall, a last-minute request by the Mexican Agriculture Trade Office, with the help of The Brewers Association (a U.S. trade group), led to a collaboration between Rahr and the brewery Casa Cervecera Morenos.

The idea behind the Mexican government initiative was to demonstrate that, despite the divisive rhetoric from Donald Trump and other Republicans toward Mexicans, the countries still maintain a close relationship, socially and economically. Dozens of U.S. breweries volunteered to collaborate with Mexican breweries, and the results were poured last year at Cerveza México 2017, an annual beer festival in Mexico City. Though the invitation arrived with no time to spare, Swan and Wood accepted.

“It was just something fun we were going to do,” Wood said. “We didn’t know it was going to be a beer we produced.”

Their contact at Casa Cervecera, Ernesto Mora Romero, flew in soon after with a contribution from his country — a large plastic bag full of Tajín chile powder. Since Moreno had already suggested the name of “Paleta de Mango” (mango popsicle), Swan settled on a ripe mango puree and added lime to the recipe. Word of the side project got out, and soon employees and taproom tour regulars were clamoring for it. Demand grew so high that people were buying tickets to Rahr’s 13th anniversary celebration last November — an event that already boasted pretty much every beer in the Rahr portfolio — just for the possibility of tasting the collaboration ale.

Now Swan and Wood were tasked with getting Adiós Pantalones ready for release by May 5, Cinco de Mayo, which meant having the beer branded and in cans in February.

“The craft beer world moves so quickly, you have to strike while it’s hot,” Wood said. “Adios [Pantalones] was already so far along, I could let it coast at that point.”

Wood had to market a nonexistent beer. The finished cans of Paleta de Mango were several weeks away. For one promo shot, Wood cooked dozens of tacos from scratch and placed them around cans that were readily available in the brewery. He then Photoshopped the now-familiar gold and black label onto each can. The tacos hinted at where many kegs of Adiós Pantalones and Paleta de Mango have since landed — in Tex-Mex and Mexican restaurants across Fort Worth. The beers are selling in restaurants and grocery stores as quickly as Rahr can make them, Swan said.

Beer styles wax and wane in popularity, Wood said. In his past careers in the fashion and custom car industries, he has seen countless trends fade every decade or so only to return again. Heavy, often syrupy beers like barleywines, imperial IPAs, and Russian imperial stouts inundated North Texas a few years ago and continue to be popular, but many craft beer consumers (myself included) have a newfound appreciation for session ales, pilsners, and lagers.

Swan can relate. Historically, he said, beer was always meant to be something that could be done in moderation on a daily basis, which means there should be a part of the craft beer market that makes affordable, low-alcohol beers that are clean, refreshing, and well-crafted.

“What is Adios?” Swan rhetorically asked. “It’s a lot of things, style-wise. Paletta is refreshing. It smells sweet. You have this balance with the Tajín chile powder. It acts like a hop character. It’s a way to make it crisp and dry. These two beers are cool because they are refreshing while defying style.”