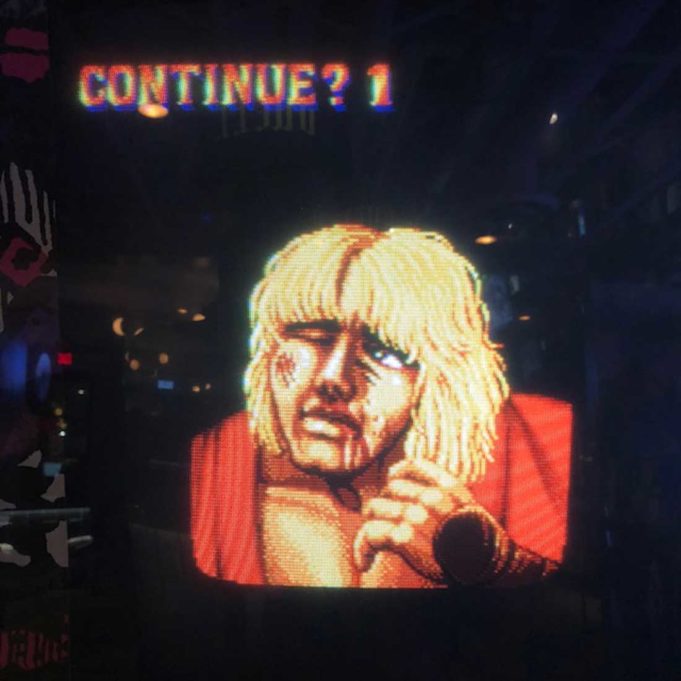 This might be a dead horse, but I’ll get one good kick in: Fort Worth has its own Dallas Uptown/Austin 6th Street/New Orleans drunks-and-cops-and-barf corridor. Maybe it’s not as wild and/or historic as the last one, or as bougie as the first one, or as Real World season 16-ish as the middle one, but seeing as how the police have dedicated resources specifically to that area, West 7th has firmly cemented itself as Fort Worth’s centrally located backwards-hat-and-beard-bros/patio-cornhole party zone. Even on a non-weekend evening, the bars are still loud, the sidewalks are still thronging, and people are still trashed.

One of the newest additions to the area is Fort Worth’s Kung Fu Saloon, the sixth location in an ever-expanding chain of big-box drinkatoriums based out of Austin. The place is branded with a general sense of ’80s nostalgia that glows from vintage arcade games and chopsocky martial-arts flicks/iconography. There are two of these places in Austin, one in Houston, another in Nashville, as well as the location in Uptown Dallas that was made infamous by the federal government’s ruling that it barred entry to African- and Asian-Americans in a discriminatory way, based on a subjectively enforced dress code. The Uptown Kung Fu Saloon settled the case with a fine and the agreement that it and the Austin and Houston locations, as well as the chain’s website, would post verbiage indicating that all patrons are welcome regardless of background, in addition to providing civil rights training to their respective staffs. Since that’s pretty similar to the charges levied against the enduringly popular Varsity Tavern, you might say that a place like Kung Fu Saloon is right at home in the West 7th corridor.

You could also say that because the bar offers the sort of mega-patio square footage and outdoor activities that are common among several other spots in the neighborhood. Inside the fences of Kung Fu’s spacious outdoor area, you’ll find ping-pong tables next to the aforementioned cornhole and Giant Jenga, both of which seem to be ubiquitous in this part of the world. There’s also an outdoor bar and TV screens –– when I went Monday night, I could see the Rangers’ pathetic showing against Boston in all of its big-screen ignominy from my car parked across the street.

Inside, you’ll find a centrally located bar, in the middle of which are a couple of dozen beer taps. Above that is a shelf of liquor –– if you hang out with people who ask bartenders for weird vodka flavors, Kung Fu is the place to take them, because the in-house flavored vodka selection is as colorful as a Crayola 96-pack. The room’s décor is pretty spare, leaving the arcade games to create the atmosphere. I counted 16 arcade cabinets, and compared to eye-popping variety at Free Play, the titles were pretty basic: Ancient classics like Centipedes, Mario Bros., and Galaga stood next to a couple of popular early-’90s beat-’em-ups – Teenage Mutant Ninja Turtles and X-Men – plus some 21st-century games, made-for-arcade versions of Guitar Hero and Super Mario Kart. On the south side of the room near the door, there’s a shuffleboard table. On the opposite end, the room houses four pinball and skee-ball machines, as well as a pink neon sign that reads, “Twerk,” because West 7th.

I ordered a basket of tater tots, which seemed to be the most palatable-sounding item on the food menu. A sign next to the beer taps advertised Sunday Funday activities: free games, DJs all day long, and the promise of lots of gong hits. I asked the bartender what that meant. “It’s for the vibe,” she said. Indeed, the posts that bracket the beer taps are decorated with a gong and a couple of mallets, so I guess when things get busy, the bartenders ring them to add to the excitement.

Assuming that Kung Fu Saloon keeps with its legally mandated inclusive door policy, I’d say it’s a largely inoffensive addition to West 7th’s noisy, boozy, crowded rows of huge bars, but I wasn’t really wowed. If you’re really into vintage video games, you’ll have more fun at Barcadia, though Free Play in Arlington is the basically the final boss when it comes arcade-bar combos. But for casual gamers and people who love hanging out in that area, Kung Fu Saloon will provide all the expected kicks.