Wednesday 18 – San Diego post-hardcore rockers Secrets come to Fort Worth this evening to promote their new self-titled album. They’ll be joined by Navajo, NU-95, The Drop Deadlys, and Forget Conformity at 8pm at The Rail Club, 3101 Joyce Dr, FW. Admission is $12.

Thursday 19 – A tasting menu from the culinary delivery service of Meyer and Sage starts at $200, but you don’t have to pay that much to attend the Empty Bowls fundraiser with Meyer and Sage cofounders Callie Salls and Maddie Sharp who will be demonstrating delicious dishes to make for the summer. The proceeds from admission go toward the Tarrant Area Food Bank, too. The seminar is at 6pm at TAFB Demonstration Kitchen, 2525 Cullen St, FW. Admission is $75. Call 817-857-7100.

Friday 20 – Immersive technology is the name of the game at Virtual Reality Weekend at the Fort Worth Museum of Science and Nature. This whole weekend will be given over to demonstrations of the tech and its uses in both Hollywood movies and museums, and a Science on Tap event for adults only will kick things off. The weekend runs Fri-Sun at 1600 Gendy St, FW. Tickets are $13-16. Call 817-255-9300.

Saturday 21 – The films at the Modern this weekend have a Beatles tinge, with both a 50th anniversary screening of Yellow Submarine and a Japanese film called Norwegian Wood that’s set during the Beatles heyday. In addition, Q Cinema screens the Armenian-Iranian-American coming-of-age film Apricot Groves. The movies run Fri-Sun at the Modern Art Museum of Fort Worth, 3200 Darnell St, FW. Tickets are free-$10. Call 817-738-9215.

Sunday 22 – There are African-American stand-up comics, and then there’s Alfred Kainga, who was actually born in Zimbabwe. He emigrated to Dallas in 2006 and graduated from open-mic nights to appearing in a Kevin Hart special and talking about rappers who rhyme about things that he can’t relate to. He’ll be onstage Fri thru today at the Improv Club, 309 Curtis Mathes Way, Arlington. Tickets are $17-27. Call 817-635-5555.

Monday 23 – Edward Yang’s masterpieces A Brighter Summer Day and Yi Yi: A One and a Two and Seijun Suzuki’s insane Tokyo Drifter are some of the films on display at this year’s Asian Film Festival of Dallas. You can also see the animated Chinese gangster film Have a Nice Day; the documentary Shalom Bollywood, about the hidden Jewish history of Indian cinema; and the Korean cop film Buybust, set in the Philippines. The festival runs Thu thru Jul 26 at Angelika Film Center, 5321 E Mockingbird Ln, Dallas. Tickets are $8-15. Call 214-620-0885.

Tuesday 24 – Out on Stage is not a broadcast of a stage play but rather of a comedy show hosted by Zach Noe Towers. He’ll bring on 16 gay and lesbian stand-up comics to riff on all manner of subjects to get laughs out of both the LGBT people and the boring straight crowd. The special airs at 8pm at Cinemark Denton, 2825 Wind River Ln, Denton. Tickets are $12-14. Call 940-535-2564. 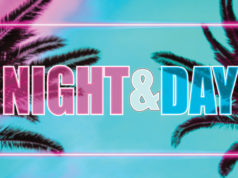