Recent pop-up concert movements like Sofar Sounds have popularized a concept that has been in the back pocket of classical musicians for a few hundred years now. Private house performances offer an ideal setting to enjoy live music, and it’s a surprise that we don’t see more of them in our fair city. Now, a new classical music series aims to make home concerts a permanent fixture of Fort Worth’s cultural landscape. Hosted at a private residence near TCU, Opus Nova’s program included works by Antonio Carlos Jobim, Astor Piazzolla, and other contemporary composers.

The evening moved at a leisurely clip as well-dressed servers passed out appetizers and wine before the concert. After the 30 guests settled in, host Susan Motheral introduced the evening’s performers: Stas Chernyshev (clarinet), Jordan Dodson (guitar), Ann Hung (clarinet), and Christine Lamprea (cello).

New York-based guitarist Dodson opened by performing “A Felicidade” by Jobim, the Brazilian composer famed for penning “The Girl from Ipanema.” Dodson captured the room’s attention from the onset and didn’t let it go. His performance made the tricky bossa nova-tinged passagework sound effortless, and he added a few personal flourishes (including a blues lick) of his own. Hung joined Dodson for Laurent Boutros’ “Amasia.” Spanish and Middle-Eastern harmonies swirled as the clarinetist energetically threaded the numerous melodies together. The first half concluded with “Histoire du Tango” by Piazzolla. Arranged by Chernyshev, the duo performed in lockstep, capturing the emotionally wrought tension of tango dancers through sound.

Dodson again opened the next round of pieces. The performance of composer Roland Dyens’ “Libra Sonatine, Fuoco” was a dizzying and relentless display of guitar virtuosity replete with breakneck arpeggios, percussive techniques, and even a slap bass passage that would have made Victor Wooten blush. Dodson executed with just the right amount of flair to elevate the piece without overselling it. 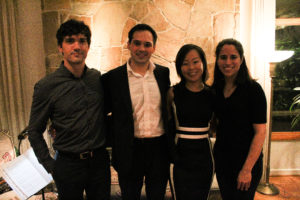 “Bloom Trio” by Elliot Cole was commissioned by Opus Nova. The various movements were post-romantic vignettes that employed the cello, clarinet, and guitar the way a master painter applies bright colors to a canvas. Maybe it was my third glass of wine taking hold, but the second movement evoked images of assembly line machinery working in succession with simple phrases built on repeating patterns. What I believe to be the third movement (the program didn’t list them) induced a dreamy state in the listener, as the tonal landscape phased in and out of focus, often discordantly.

My favorite piece that night was the finale, “Doce de Coco” by Jacob do Bandolim, whose overlapping sensual melodies created a sense of auditory intoxication throughout the room that lingered long after the performance ended –– my fourth glass of vino helped nurture that feeling.

The recently disbanded Hall Ensemble was a living room stalwart, and I’m glad to see another group is picking up where they left off. Opus Nova will feature a rotating lineup of guest musicians who will perform at various high-tax-bracket neighborhood homes and at Avoca Coffee through Opus Nova’s Casual Concert Series. The next concerts are December 9 (Avoca Coffee) and December 10 (private home). Purchase your tickets here.