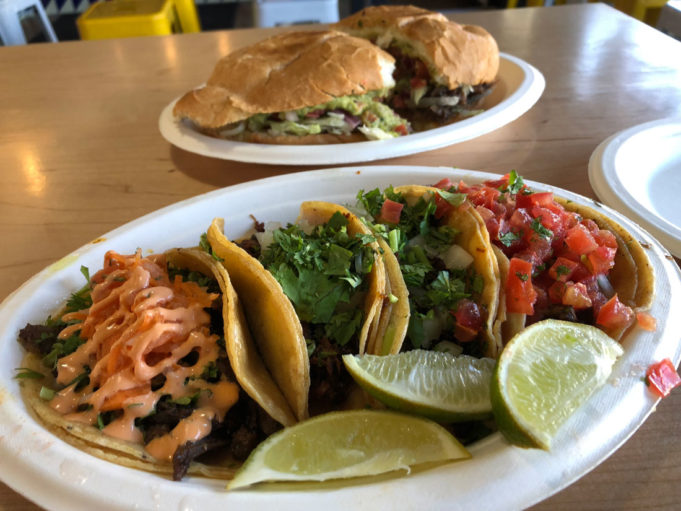 I’ve never been a fan of picking my own components for a given dish at a restaurant. That’s the biggest reason I eschew chains like Chipotle, Subway, the Mongolian grills, or any other place that allows you to customize your order to the nth degree. You’ve got chefs. You tell me how to best combine your ingredients. Despite my Andy Rooney-esque old-person opposition, these choose-your-own-culinary-adventure joints are popping up everywhere. (If you’re younger than 35, take a moment to look up Andy Rooney, so you’ll get that reference. I’ll wait.)

The Fort’s latest you-call-it eatery just opened in the West 7th area in the same mini-complex as coffee bar/bar-bar Ampersand and Zenna Thai-Japanese. Month-old Richardson-based OMG Tacos (3011 Bledsoe St, 817-882-6472) also offers a regular menu of already-figured-out burritos, nachos, and tortas, but they make a pretty big deal out of your ability to pile onto a taco a variety of standard-issue condiment-level add-ons like guac, onions, and various kinds of cheese.  *Read in Andy Rooney’s voice* And why can’t people spell out whole words and phrases anymore? They should call it A.D.D. Tacos. (Seriously. Look him up.)

There’s not a lot of real estate in the dining room/walk-up counter, and the walls are barren save for shimmering golden OMG letter-shaped balloons and a yellow neon sign that reads, “Tacoholics Anonymous.” There’s a bar set up in the corner, but the place’s liquor license hasn’t arrived yet, so the swirling frozen margarita machines lie dormant for now.

The bill of fare is a gringo-friendly mix of Tex-Mex and Mex-Mex, though I was interested only in the street tacos, which the friendly woman working the counter assured me were authentic – until you add sour cream, jack cheese, hot Cheetos, lettuce, and queso. Then they’re dorm food.

The fixins on my OMG Pork Taco ($2.50) were pre-determined. I ordered it just so I didn’t have to think about toppings. It arrived piled high with onions, cilantro, and tangy pickled carrots and daikon radish, with a spicy mayo drizzle, all crammed into two-plied corn tortillas. The menu promised the pork was imbued by a “special marinade,” but all I tasted was the overpowering vinegar from the carrots.

The marinade on the OMG Steak Taco ($3.25) was sweet and tangy, and the taco was overflowing with fresh-tasting diced tomatoes. Even better was the pastor ($1.75), a semi-sweet sponge of juices. I ordered pico on the side, though the kitchen forgot and I was satisfied without, so I never pressed the issue. The trio of housemade salsas (red, green, and fire from hell) were all criminally spicy.

My guest’s no-protein nachos ($9.50) arrived in a paper bowl (the place doesn’t serve anything on real plates) with a hillock of guac atop melted cheddar cheese, pico, sour cream, and crispy chips. His barbacoa torta ($9.75) was basically a taco on a toasty bolillo, packed full of meat, lettuce, tomato, onion, queso fresco, and guac. It was filling and delicious but scarcely a replacement for the tacos – the kind of dish you order when you’ve been to a place so many times that you’re sick of all the headliners.

I somehow managed to walk out of the month-old eatery without making many choices – except for what to order. And, as it turns out, I didn’t need to make any decisions. The kitchen did just fine without my help.