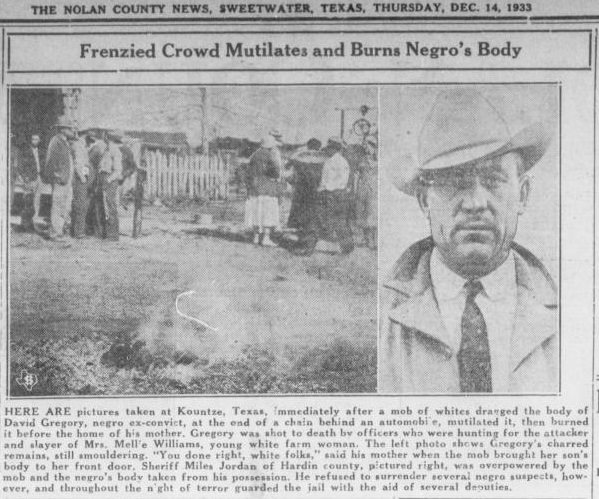 On Saturday, December 2, 1933, a 30-year-old white woman named Nellie Williams Brockman was murdered near Kountze, Texas. Brockman had headed to town to visit a department store and run into trouble along the way. She was shot to death, and her body and vehicle were found partially burned. Some locals claimed they had seen a shotgun-wielding black man in the vicinity, and law enforcement officials mounted an intense search for the culprit. But they turned up nothing.

A few days into the manhunt, the Kountze Police Department received a “secret” tip incriminating a young African-American ex-con named David Gregory. When Gregory, a preacher’s son, became aware of the police department’s suspicions, he fled to a nearby church. On December 7, Hardin County Sheriff Miles D. Jordan and various other law enforcement personnel discovered Gregory hiding in the church’s belfry. When they ordered him to come down, he refused and allegedly “flourished” a pistol (not a shotgun, the weapon the black suspect was reported carrying near the crime scene). Gregory was subsequently felled by a buckshot blast that rendered him unconscious.

Sheriff Jordan and his fellow officers transported Gregory to a Beaumont Hospital, but a portion of his neck and face were blown away. He was in critical condition and received emergency treatment, but the doctors indicated that he wouldn’t survive the night.

Sheriff Jordan hoped that Gregory would regain consciousness so testimony would confirm the secret tip, but less than two hours after their arrival at the hospital, word was received that a mob had formed in Kountze and was headed toward Beaumont. Hospital authorities expressed their discomfort with harboring a suspect that could put the facility at risk, and Jordan calculated that their chances at keeping Gregory from the mob were slim, in or outside the facility.

Sheriff Jordan snuck Gregory down a back elevator, placed him in his vehicle, and drove toward Vidor (seven miles east of Beaumont), planning to double-back and take Gregory to a hospital in Port Arthur (30 miles farther south). Gregory never regained consciousness and died not long after the sheriff’s car crossed into Orange County.

As the mob was still active, Sheriff Jordan was unsure of what he should do with Gregory’s body. He considered a return to Beaumont unwise, so he drove to Silsbee (23 miles north/northwest). At Silsbee, another mob assembled, and the local undertaker, fearing trouble, refused to accept Gregory’s remains. With limited options and operating under the assumption that the Kountze mob was still in Beaumont, Jordan headed back west. When he entered the Kountze community, hundreds of white men crowded in front of his vehicle. The mob seized Gregory’s corpse and tied it to the back of an automobile. A 50-car parade then dragged the body around Kountze for close to an hour, so long that a large bonfire that had been built to incinerate Gregory had burned out.

Denied a fire, the mob mutilated Gregory’s body, cut out his heart, and re-fastened his corpse to a car and “bounced” it through the African-American section of Kountze, reportedly screaming “Nigger for breakfast!” Members of the throng then delivered the mangled corpse to the front doorstep of Gregory’s mother, whom they had belligerently summoned. When Mrs. Gregory appeared, however, she succinctly denied them her anticipated hysterics. She glanced over what was left of her dead son, said, “You’ve done it right, white folks,” and went back inside.

The stupefied white mob retrieved David Gregory’s hide-less remains and dragged them to a new bonfire that had been built in a vacant lot not far from his home. As Gregory’s body cooked, members of the mob drank coffee and ate sandwiches.

The next morning, African-Americans who passed by the smoking embers were called over to “see what happened to David Gregory.” Newspapers later included a photo of Gregory and his smoldering remains in their reporting.

Several years after the Gregory burning, a local white man on his deathbed confessed to the murder of Nellie Williams Brockman.

Unpleasant as it is to admit, Texas has a history of this type of monstrosity. David Gregory — like so many persons of color in America today — was denied due process, found guilty in the eyes of the mobs, and gunned down in a shoot-first-ask-questions-later manner that we’re not unfamiliar with. He was the last known African-American burned at the stake in the Lone Star State, but dozens preceded him. One in Belton, one in Temple, one in Rockwall, one in Hillsboro, one in Corsicana, one in Sherman, one in Greensville, two in Waco, two in Tyler, three in Sulphur Springs, three in Kirvin, four in the Paris, Texas, area, the list goes on. Gregory’s cruel, forgotten fate reminds us that denial and forgetfulness are staples of white primacy and elucidates why we bristle so at threats to our historical amnesia. We white folk like to think well of ourselves, but we haven’t behaved particularly well. And our shortcomings continue to prevail today.