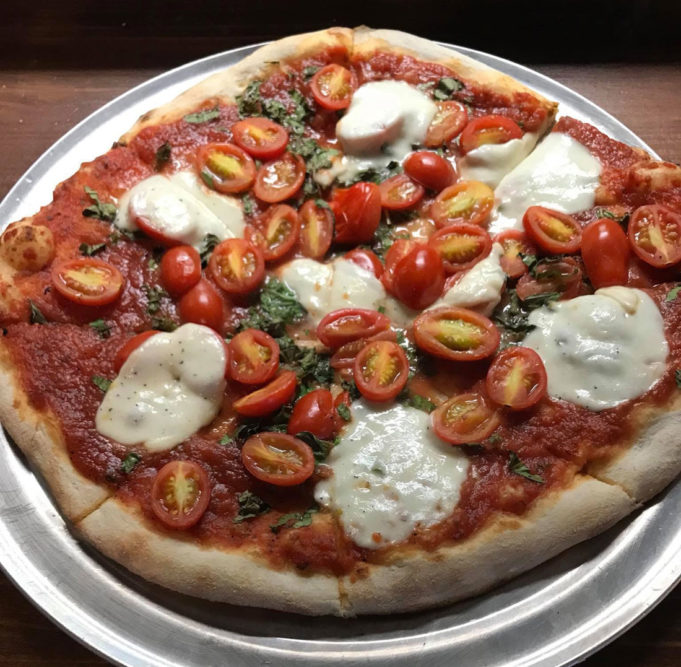 It would be easy to roll your eyes at the fact that yet another ownership group has taken over the chic corner spot on West Magnolia Avenue that once housed Zio Carlo and Chimera Brewing – and they’re trying the same pizza-and-fancy-beer concept. Here’s the thing: That new ownership group is the Kents, the same people who own the hip wine bar that’s festooned with new cars down the street. They’re also the ones who helped fellow Magnolians Melt Ice Creams and Heim Barbecue & Catering become critical darlings on Fort Worth’s hottest street.

A cynic might decry the restaurant expansion of bro-and-sis team Will Churchill and Corrie Watson as some kind of corporate culinary hegemony, but that person I just made up would also be ignoring the pair’s amazing track record. Everything they touch seems to turn into a cool-looking place that cranks out yummy food. Fort Brewery & Pizza, I’m happy to report, is serving the best food to ever come out of that kitchen, and the vibe is as hip and laidback as it every was.

Maybe people have some false notions about the Kent folk. I get that Magnolia Avenue has always been a haven for multi-tatted band dudes and dudettes who travel by skateboard, so anyone who can’t rock an A-chord repeatedly or name at least 14 Guided by Voices albums appears to be a threat. But if you’re among the wrongheaded, I have a question for you: What have Churchill and Watson ever done except improve the Near Southside’s main thoroughfare? There are a few scumbag landlords on that street alone who you should be more worried about.

Let’s try a fun exercise to help you exorcise your Kent preconceptions. Every time you’re tempted to use the word “corporate” to describe them, try “well-run.” Instead of “cookie-cutter,” how about “attractive” and “clean”? Sorry you can’t get tetanus from the toilets at any of their places, but you can find the bacteria you crave at almost any other bar in town.

I don’t have much to write about the beer. Besides, our Last Call contributor G.P. Kennedy covered that pretty thoroughly anyway (“Fort Brewery, a Standout,” Oct 4). I do have a lot to say about the food.

On my first of two visits to the counter-service brewpub, I noticed a difference in the kitchen as soon as our starters arrived at the table. Both the Italian Caprese ($8.50), a simple salad of tomato slices, thick slabs of mozzarella, and specks of fresh basil, served with a balsamic reduction, and the Dog Bones ($9.50), several giant batons of bread slathered in garlic, parmesan, marinara, and gooey cheese, were both expertly seasoned and oh-so-fresh-tasting.

What really thrilled us were the pies. You can apply those last two descriptors to the margherita ($14 for a full), blanketed with a flavorful red sauce, tasty slices of fresh mozzarella, sweet cherry tomatoes, and fragrant chopped basil, and the deceptively elegant rosemary-and-potato pizza ($13 for a full).

I had to visit Fort Brewery again a few days later to check out The Zeppelin ($18), a pizza whose hodgepodge of chaotic-sounding ingredients had piqued my curiosity. The mélange of spicy salami, Italian sausage, roasted red bell peppers, and mozzarella, all topped with drizzles of ranch dressing and Heim’s barbecue sauce, was as playful as it was nostalgic – like a way more extravagant version of something I might have enjoyed during the sleepovers of my youth.

So let go of what you think the Kents are all about and go see for yourself what they’re actually doing. Fort Brewery is a great place to start.