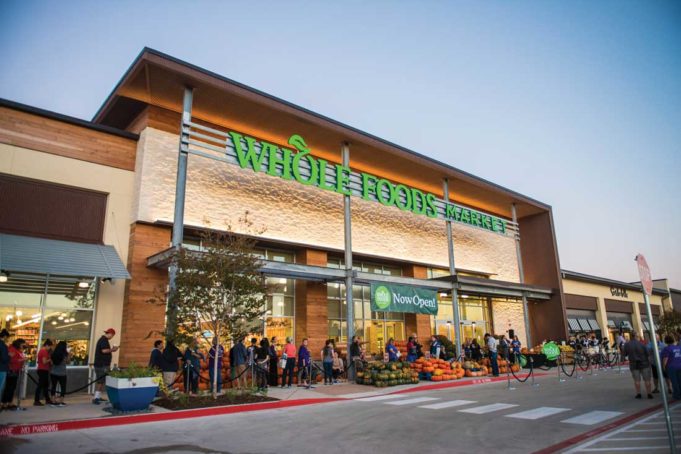 During the first of many recent trips to Whole Foods (3720 Vision Dr, 682-316-8040) in preparation for a big holiday meal at our house, my husband and I stopped by the grocer’s surprisingly legit bar located somewhere between the frozen foods section and the fresh seafood counter. We simply couldn’t resist bellying up to the cheerfully lit bar, replete with a shuffleboard table and half a dozen flat-screen TVs, before we tackled our daunting list. There was even a birthday party of some kind in progress, with children playing board games at one of several picnic tables adjacent to the bar area, next to an endcap stocked with green beans and canned yams.

After I ordered a glass of prosecco and my partner obtained his Rahr Blonde (the menu is all beer and wine but is impressively extensive), I asked if we could take the drinks with us while we perused the aisles.

Indeed, Whole Foods, along with the Tom Thumb at Left Bank (2400 W 7th St, 817-302-1400), and that old –stalwart Central Market (4651 W Fwy, 817-989-4700), all grant you the opportunity to grab a pint or a glass of wine before, after, or, in the case of the first two, during your shopping trip. Most of us understand that this is all a ploy by the stores to get shoppers tipsy enough to go home with all sorts of things they never planned on getting –– the idea being that their lowered inhibitions will result in higher totals at the cash register. I know this, but I don’t care.

Tom Thumb’s swanky-looking beer and wine bar has a name — Trinity Crossing — and like Whole Foods, it offers a surprising array of local, foreign, and domestic drafts and bottles along with eight or so wines by the glass. Everything was very reasonably priced at around $4 to $8. When we visited, a group of Cowboys fans were posted up to watch a game while enjoying some of the in-house food the bar also serves, including pizza, pho, and poke bowls. All of this goes on mere yards from the produce section, but it’s tucked back in such a way that I actually went to that Tom Thumb several times before I even noticed the bar area’s existence.

Even though the internet has schooled me on the fact that this is a nationwide trend by supermarkets to get customers to linger longer and come back more often, Central Market, to me, deserves credit for sort of originating this concept, at least locally. Although I don’t think you can actually walk around with an open container in the store, you can pick up a bottle or six-pack, finish up what you’re ostensibly there to do — grocery shop — and promptly go day drink on the expansive patio. CM even encourages this by hosting live music on Friday and Saturday evenings during the warmer months and equipping the cashiers with bottle openers. In fact, it was one of the first places my sister took my husband and me to before we moved to the Fort from out of state. Drinking on a patio listening to live music at a grocery store: “This is so Texas,” we thought.

But it should be noted that the overall shopping experience must already be somewhat elevated for this to really work. You wouldn’t want to pop open a craft brew at, say, Albertson’s, because that store doesn’t have quite the luxurious feel to it. You’d feel more like that lady who got banned from Walmart for drinking wine out of a Pringles can. Not the same.

Still, knowing all of this is a marketing ploy, many of us will do it anyway — as we should— because it livens up a once-dreaded weekly chore, because it’s a novelty, because the world in which we live is wholly terrible, because it feels like a uniquely Texas thing to do (even if it’s not), and, well, because we can. It feels decadent and a little wrong. But God help us all — and our wallets — if Target ever gets a TABC license.