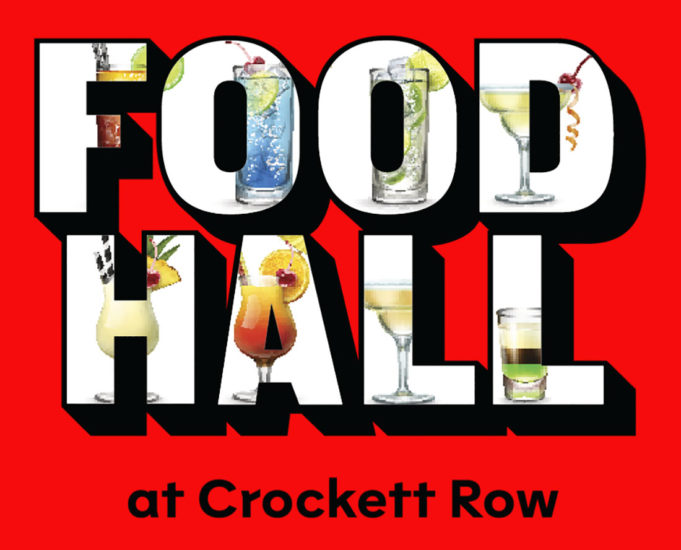 With all the growing up our Fort has been doing in the last decade, it feels like we’re a little overdue for a food hall – that fancified food-court concept that has been popping up around other metropolises for some time now. I was excited when I first heard about one opening at Crockett Row (the western end of what us olds used to call the West 7th Development). Itching to check out the aptly named Food Hall at Crockett Row (3000 Crockett St, 817-810-9076), I convinced my friend to “stop in” with me before we met some other friends for dinner.

Upon arriving around 6:30pm on a Stock-Show Saturday night, my companion and I were greeted by a plethora of delicious aromas: freshly brewed coffee and baked bread, sizzling meats from various griddles, the whiff of smoking barbecue, and more. But we bypassed all of it, miraculously, and headed to the large U-shaped steel bar located toward the back of the space, next to celebri-chef Jon Tesar’s Knife Burger. Naturally, it’s called Knife Bar.

Nearly every seat was taken at the bar — a good sign for the Hall — but we found the last two and took it as a sign that we should stay a little while. Service was prompt, and I immediately ordered the first signature cocktail to catch my eye. The habanero pineapple margarita tasted tangy and refreshing, as most margaritas are, but was not for ’rita purists, as the flavor was quite transformed by the overpowering pineapple. My companion had better luck with the Bramble, a gin-based drink with blackberries and fresh thyme, which was more balanced.

Although friends would soon be waiting nearby, we couldn’t force ourselves to leave after just one drink. Wanting to try one of Knife Bar’s two frozen options – the standard frozen marg and the on-trend Frosé – I swallowed my preconceived notions and ordered the latter. A smoothly blended combination of strawberry puree, vodka, and the namesake rosé wine, it was so good I was thankful that it was cold, forcing me to drink it slowly.

Around this time, the smells coming from Knife Burger’s fryers became too much to bear, and my friend quickly walked over to order fries to nosh on while we sipped — a little appetizer before our scheduled meal, we reasoned. The fries, of course, necessitated more drinks to wash them down, and I began to see a pattern emerging that could feasibly keep someone within the walls of the Food Hall for hours on end.

As we were enjoying our cocktails and people-watching, the amiable bartender recommended we come back sometime for happy hour — 11am-6pm Monday through Friday. During that time, signature cocktails that normally run you $11 or $12 are $5.50. Draft beers, like Revolver’s Blood & Honey and Deep Ellum Brewing’s Neato Bandito, are also about half off at $3.50. We promised to return and asked which stall we should try on our next visit. She told us she had ventured out to try lamb shawarma for the first time earlier that day at yet another aptly named place: Shawarma Bar. She loved it.

One small hitch: We enjoyed the Food Hall atmosphere so much that we vowed to take our friends back for a nightcap after dinner. Crockett Row’s website, as well as hours listed on the door, state that the Hall stays open until 2am on Fridays and Saturdays, but upon arriving at a tad past midnight and finding a parking spot in the adjacent garage (all of the food stalls validate), we found the doors to be locked and chairs stacked on tables. It was deflating, but I’ll assume they are still working out the kinks and leave it at that.

With 12 different cuisines to choose from and an amply stocked bar, you could have any number of different experiences at the Food Hall and probably never be disappointed — as long as you come during business hours.