Michael Harper was in high spirits when we chatted last week at Funkytown Donuts and Drafts. The downtown locale was auspicious. As he described his early years of rummaging through Flying Saucer’s beer menu, he gazed at the Saucer’s original location (now Bird Cafe).

“I used to go down Flying Saucer’s list and order whatever was on sale or looked obscure,” he said. “It wasn’t until I ordered Chimay that I realized all those flavors could be in one beer. Every beer I ever tasted [up until then] wanted to taste like that.”

Harper has been chasing the beer dragon ever since. He was recently hired as head brewer for Funky Picnic Brewery & Cafe, the picnic-themed brewpub set to open this spring in South Main Village. Locals may remember Harper as the co-founder and former head brewer at Panther Island Brewing. The beer meister joked that he’s been in a “self-imposed exile” since then, working first at Texas Ale Project, Community Beer Company, then Oak Highlands Brewery. Each brewing gig gave him a different perspective on the brewing process. Funky Picnic patrons can expect to see Harper often. He described the “performative” aspects of his new job.

“I want to brew the beer and then awkwardly watch people drink it,” he said with a laugh.

Harper loves talking about beer: what makes it great or not so great. He doesn’t get too nerdy about beer, but he can if he needs to. He plans to run his brewery tours off the cuff. If customers know the basics, he said, the tours can skip a few chapters to chat about esters or off-flavors.

Harper has a knack for creating superlative beers and impossibly complicated beer names. “Be my landfill, not my land-f’ont” is one example he tossed at me. As for the beers that will be on tap, Funky Picnic will have 15 taps. All but three will be for in-house beer. Wine, coffee, and kombucha will likely be offered too. Fans can expect funky releases — prickly pear pink peppercorn saison, Drunk Uncle (Imperial Saison with whiskey- and wine-soaked wood chips), Belgian waffle-inspired Triples, bourbon-soaked cherry with habanero beer —  as well as true-to-style lagers, pilsners, hefeweizens, and others.

This week, Harper is overseeing plumbing installation at the brewpub. The week after, he plans to clean the brewery equipment. As Funky Picnic finalizes its food offerings, Harper will be able to match those noshes with his beer recipes. The brewer is also on the lookout for a brewery cat.

“Something about Fort Worth has always spoken to me,” he said. “There’s an amazing community of brewers here. I consider myself super lucky to be a part of it.”

From Wild Acre: February 16th (2pm to 6pm), we pay tribute to the long lost historic Fort Worth rock and roll club, the Wreck Room, with the release of Wreck Room IPA. Double dry hopped with 7.6 percent ABV — a killer IPA worthy of its legend namesake. Be the first to experience the Wreck Room in a glass before it hits bars and retail stores for a limited time beginning. Visit the event page here.

From Cowtown Brewing: The moment we’ve all been waiting for is finally here! Our official GRAND OPENING extravaganza is going down Saturday, March 2nd ALL DAY LONG!

We’ve got a great itinerary for the day starting with the release of two new beers: Everybody’s Doing It, our double dry hopped IPA, and La Mera Hora, our Mexican lager. Both of these beers are fantastic in their own right and we’re excited to launch them on this special day.

There will be games for the kids and treats for the dogs. Pint Services will be printing custom T-shirts on site, and we’ll have unique glassware to mark the occasion. We’ll also be doing a raffle at the door. More surprises as we get closer so stay tuned. You don’t want to miss this epic event! Visit the event page here. 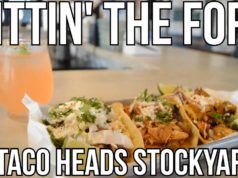 Hittin’ the Fort with Sarah Castillo